PART A
Question.1. What is a market economy?
Answer. Market economy is an economy where central problems are solved through the free force of supply and demand.

Question.2. When is a firm called ‘price-taker’?
Answer. A firm which has no role to play in price fixation and accepts the price determined by market
demand and market supply is called a price-taker. A competitive firm is a price-taker.

Question.3. Define budget set.
Answer. The budget is the set of all possible combinations of two goods which a consumer can afford, given his income and prices in the market.

Question. 5. Define supply.
Answer. Supply is that part of stock of a good which is brought into market for sale at a price at a given time. It means the quantity of a good which a firm is willing to supply at a given price during a period of time.

Question.6. Why is a production possibilities curve concave? Explain.
Answer. A production possibility curve is concave to the origin because marginal opportunity cost is increasing. Marginal opportunity cost of a particular commodity is the rate at which we forego a commodity for producing an additional unit of the particular commodity. As shown in diagram 1, for producing an additional unit of commodity X we forego units of commodity Y at an increasing rate. 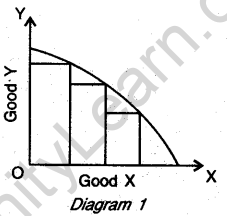 Question.9. Draw average revenue and marginal revenue curves in a single diagram of a firm which can sell more units’of a good only by lowering the price of that good. Explain.
Answer. This is a case of monopoly and monopolistic competitive market situation. In these markets a firm can sell more of its products only when it lowers down the price. This means AR (Price) curve slopes downwards to the right. When AR slopes downwards to the right, has a negative slope. MR is less than it. It can be mathematically derived. Thus, as shown in the diagram, AR > MR. This also becomes evident by looking at the schedule given below.

Distinguish between Average’ and Marginal Revenue with the help of a numerical example.

Question.10. Explain the implication of ‘freedom of entry and exit to the firms’ under perfect competition.
Answer. An important characteristic feature of perfect competition is the freedom of entry and exit to the firms. Because of this aspect a competitive firm in the long run gets only normal profit, i.e. AR = AC. If the existing firms are getting abnormal profit (i.e. AR > AC), few more firms will enter the competition and the same disappears. If, on the other hand, few existing firms are incurring losses (AR < AC), they leave the competition and the remaining firms get normal profit.
Or
Explain the implication of ‘perfect knowledge about market’ under perfect competition.
Answer. Under perfect competition all buyers and sellers have perfect knowledge about the market conditions. With the result, goods being homogeneous, the same price prevails. A firm cannot charge higher price because the buyers know that it is available at a lesser price elsewhere. Similarly, a firm will not charge lesser price, because it will be imprudent to do so, for it can get the same price which other firms are getting. As a result uniform price prevails in the market.

Question.11. A consumer consumes only two goods X and Y. State and explain the conditions of consumer’s equilibrium with the help of utility analysis.
Answer. See Q. 14 (Or), 2009 (I Delhi).

Question.13. Define ‘Market-supply’. What is the effect on the supply of a good when Government imposes a tax on the production of that good? Explain.
Answer. Market supply is the total supply (supply of all firms in the market) of a good at a price at a time. It is obtained by adding up individual supplies of all the firms. When a government imposes a tax on the production of a commodity, its cost goes up. With the result, its supply falls at a given price. Thus, as shown in diagram 3, supply curve shifts towards left. Supply schedule is a two column table, which shows various quantities supplied corresponding to prevailing market prices at a time. A hypothetical supply schedule of commodity X is given below:

Or
What is a supply schedule? What is the effect on the supply of a good when Government gives a subsidy on the production of that good? Explain.
Answer. A supply schedule is a two column table wherein the quantity supplied corresponding to the given prices of a commodity is indicated. A hypothetical supply schedule is given below. Subsidy is a grant given by the Government to the producers so that they can sell their products at a lesser price. Thus, when Government gives subsidy, the cost of production goes down and this enables the producing firms to increase the supply at the same price. Thus, as shown in diagram 4, a shift towards right in the supply curve takes place.

Question.15. Explain the three properties of indifference curves.
Answer. (i) An indifference curve always slopes downwards to the right. In other words, it has a negative slope. To consume more of one good, the consumer must give up some quantity of the other good so that total utility remains the same. 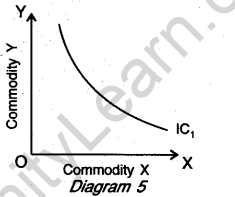 (ii) Higher indifference curve denotes higher level of satisfaction. This is because higher IC represents more of at least one commodity, which means more utility as more is preferred to less. 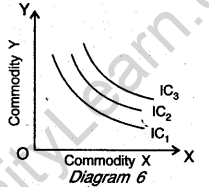 (iii) Two indifference curves never intersect each other because at the point of intersection, the level of satisfaction is the same but at other points it is hot tire same. It is not possible. Therefore, it is wrong to suggest they intersect as shown in Diagram 7. 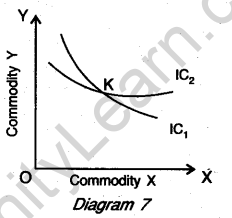 Question.16. Market for a good is in equilibrium. There is an ‘increase’ in demand for this good. Explain the chain of effects of this change. Use diagram.
Answer.

Or
Distinguish between collusive and non-collusive oligopoly. Explain how the oligopoly firms are interdependent in taking price and output decisions.
Answer. Collusive oligopoly, also known as cooperative oligopoly, is that where firms cooperate with each other in determining the price or output or both. On the other hand, non-collusive or non-cooperative oligopoly is that where firms compete with each other in determining – price or output or both.
In oligopoly, there are few dominant firms and they are free to determine price and output of their product. However, in real practice, they are not free to do so. They do not change price independently because they have the fear of retaliation by other firms. For example, if they raise the price and other firms do not raise their prices, they lose the market. On the other hand, if they lower the price and other firms also revise the price, the benefit of lowering the price goes away. As such firms mutually depend on each other regarding their decisions about price and output.

Question.19. Define cash reserve ratio.
Answer. It is a part/portion of the total deposits with the commercial banks, which they are legally required to keep in reserve with the central bank of the country.

Question. 20. Define money supply.
Answer. It is the total amount of money held by the public at a point of time in an economy.

Question.25. Explain the relationship between investment multiplier and marginal, propensity to consume.
Answer.

Question.28. From the following data about a Government budget, find out (a) Revenue deficit, (b) Fiscal deficit and (c) Primary deficit.

Question.29. Giving reasons, classify the following into intermediate products and final products.
(i) Furniture purchased by a school.
(ii) Chalks, dusters, etc. purchased by a school.
Answer. These are durable use producers’ goods.
(i) Furniture for a school is a part of capital formation and thus is a final product.
(ii) Chalks, dusters etc. are intermediate products because these are being used up in the process of production of teaching services in a school. They are not needed or their own sake but for producing teaching services.

Therefore, at a price of Rs 5 the consumer will buy 12 units. 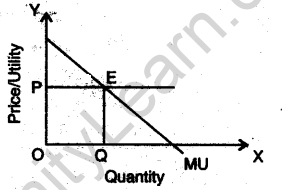 As shown in the diagram, a consumer will buy OQ quantity of a commodity because at this level MU is equal to price.

Question.15. Explain the concept of Marginal Rate of Substitution (MRS) by giving an example. What happens to MRS when consumer moves downwards along the indifference curve? Give reasons for your answer.
Answer. Marginal Rate of Substitution (MRS) may be defined as the amount of Y sacrificed for obtaining an additional unit of X. Say for obtaining an additional unit of X, 4 units of Y are foregone,
Then MRS = \(\frac { \Delta Y }{ \Delta X } =\frac { 4 }{ 1 } =4\)
MRS keeps on declining as we go on using more and more units of Y. This is because of the application of law of diminishing marginal utility. When we go on substituting Y by X, we forego units having more utility. Naturally, more and more units of Y will be foregone for successive additional units of X. This shows MRS is declining. 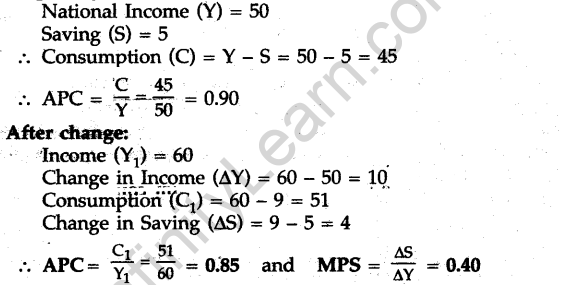 Question.11. Derive the law of demand from the single commodity equilibrium condition “marginal utility = price”.
Answer. The price and quantity demanded of a good are usually inversely related. This means when price is more, demand is less and vice-versa. This inverse relationship between price and demand can be exhibited using single commodity equilibrium condition. Marginal Utility (MU) – Price.
The law of diminishing marginal utility states that if we successively go on consuming more units of the same commodity, the utility which we derive from such successive unit (i.e., its MU) declines. Knowing this, one will have (or demand) more of a good when its price is less and vice-versa, because now he is having units yielding less satisfaction. The reverse of it will be true in opposite directions. 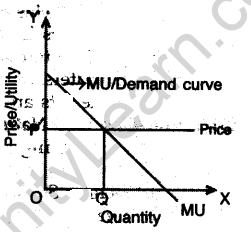 Question.15. What are monotonic preferences? Explain why is an indifference curve (i) Downward sloping from left to right and (ii) Convex.
Answer. A consumer’s preferences are monotonic only if between any two bundles, the consumer prefers that bundle which has more or (east one of the goods and no less of the other good as compared to the other bundle.
(i) An indifference curve slopes downward from left to right. A downward sloping . indifference curve shows that if a consumer has more of one good he will have less of the other good because the level of satisfaction remains the same.
(ii) An indifference curve is convex to the origin. It is because of the fact that marginal rate of substitution is declining. Marginal rate of substitution declines because of the law of diminishing utility. As such, as a consumer has more of good X, he foregoes less units of good Y.