SECTION A
Question.1. Give two examples of fixed costs.
Answer. Rent of the building and Salary of the manager.

Question.2. Define marginal cost.
Answer. Marginal cost may be defined as the change in total cost that takes place by producing an additional unit.

Question.4. Give the meaning of market demand.
Answer. Market demand is the sum total demand of all the buyers of a good at a point of time at a given price.

Question.6. Explain the difference between an inferior good and a normal good.
Answer. See Q. 7, 2009 (I Delhi).

Question.10. Explain “large number of buyers and sellers” feature of a perfectly competitive market.
Answer. Under perfect competition, the number of buyers is very large. The number is so large that no individual buyer can influence the market price. Every buyer buys only a fraction out of the total sale of the product. .
It is an important characteristic of perfect competition because of which every buyer, like a firm, has to accept the price which is fixed by the supply and demand of the whole industry. At this price a buyer can buy any quantity of the product. 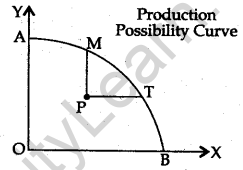 Question.12. Explain the conditions of producer’s equilibrium with the help of a numerical example.
Answer. Producer’s equilibrium refers to a combination of price and quantity of output which yields the producer the maximum profit. For achieving this combination two conditions need to be fulfilled:
(i) The difference between total cost and total revenue must be the maximum.
(ii) At the point where the difference between TC and TR is maximum MR and MC and should also be equal, Any departure from this position will not ensure maximum profit.
In the Table, the difference between TR and TC is maximum at 3 unity as well as at 4 units but the point of equilibrium is 4 units because at this point MC = MR. These two conditions can be explained with the help of a table given below:

The above position can be graphically shown in the diagram given below: 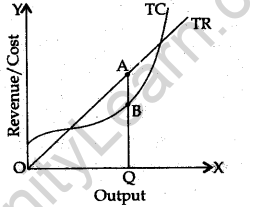 Question.13. The price elasticity of demand for a good is -0.4. If its price increases by 5 per cent, by what percentage will its demand fall? Calculate.
Answer.

Or
Explain any two factors that affect the price elasticity of demand. Give suitable examples.
Answer. See Q. 7,2009 (III Outside Delhi).

Question.14. Giving reasons, state whether the following statements are true or false:
(i) A monopolist can sell any quantity he likes at a price.
(ii) When equilibrium price of a good is less than its market price, there will be competition among the sellers.
Answer. (i) The statement is false. The price is fixed at a point where marginal cost is equal to marginal revenue. If a monopolist fixes a price less or more than the price fixed at equilibrium point, the quantity will be more or less than the equilibrium quantity but not the quantity that a monopolist would like to sell.
(ii) The statement is true. In this situation, market price is higher than the equilibrium price. As a result of which supply will be more “than demand. As such there will be competition among the sellers. In other words, sellers would like to sell their entire . quantity to meet the demand which (supply) is much more than the demand.

Question.18. What are demand deposits?
Answer. Demand deposits are those deposits which a depositor can withdraw at any given time by writing a cheque.

Question.22. Explain the problem of double coincidence of wants faced under barter system. How has money solved it?
Answer. Under barter system goods were exchanged for goods. In other words, barter economy signifies the exchange of goods through the medium of goods. However, this system created many difficulties. The most important difficulty is the lack of double coincidence of wants. This means barter transactions can only be possible when two persons desiring exchange of commodities should have such commodities which are mutually needed by each other. For example, if Ram wants cloth, which Shyam has, then Ram should have such a commodity that Shyam wants. In the absence of such coincidence of wants, there will be no exchange. However, it is very difficult to find such a person where there is coincidence of wants.
Money acts as a medium of exchange and the consumer can exchange it for purchase of any goods or services which he needs.

Question.24. Explain any one objective of Government Budget.
Answer. An important objective of government budget is to maintain economic stability. Economy of a country is affected by economic fluctuations such as conditions of boom and depression.
Such changes benefit some and harm others. In such a situation appropriate policy measures are required by the government to affect the levels of aggregate demand. Such measures are called stabilization measures. These measures aim at avoiding the situations of inflation and unemployment.

Question.28. Giving reasons categorise the following into stock and flow:
(i) Capital (ii) Saving
(iii) Gross domestic product (iv) Wealth
Answer. (i) Capital is a stock. Tins is so because Capital is measured at a point of time.
(ii) Saving is a flow. This is so because it relates to a period of time.
(iii) Gross domestic product is a flow-because it relates to a time period which is generally one fiscal year.
(iv) Wealth is a stock because it is measured at a point of time.
Or
Explain the circular flow of income.
Answer. See Q. 25,2009 (I Delhi).

Note: Except for the following questions, all the remaining questions have been asked in Set I.
SECTION A
Question.1. Give two examples of variable costs.
Answer. (i) Cost of raw materials and (ii) Wages of labourers working on daily-wage rate.

Question.8. A firm’s revenue rises from Rs 400 to Rs 500 when the price of its product rises from Rs 20 per unit to Rs 25 per unit. Calculate the price elasticity of supply.
Answer.

Question.12. The demand for a good rises by 20 per cent as a result of fall in its price. Its price elasticity of demand is (-) 0.8. Calculate the percentage fall in price.
Answer.

Therefore percentage fall in the price will be 25%.
Or
How is price elasticity of demand affected by:
(i) Number of substitutes available for the good. (ii) Nature of the good.
Answer. (i) Number of substitutes available for the good. The demand for a commodity will be very elastic if some other commodities can be used for it. A small rise in the price of such a commodity will induce consumers to use its substitutes.
For example, gas, kerosene oil, coal etc. will be used more as fuel if the price of wood increases. On the other hand, the demand of such commodities is inelastic which have no substitutes such as salt.
(ii) Nature of the good. Generally, the demand for necessities is inelastic and that for comforts and luxuries of life, is elastic. This is so because certain goods, which are essential to life, will be demanded at any price, whereas goods meant for luxuries and comforts can be dispensed with easily, if they appear to be costly.

Question.8.The price elasticity of supply of a good is 0.8. Its price rises by 50 per cent. Calculate the percentage increase in its supply.
Answer.

Question.12. Give the meaning of producer’s equilibrium. A producer produces that quantity of his product at which marginal cost and marginal revenue are equal. Is he earning maximum profits? Give reasons for your answer.
Answer. According to the MC and MR equality approach, the producer’s equilibrium is established at a point where MC = MR. Any deviation from this position will either reduce the profit of a firm or increase the losses.
By MC, we mean the change that takes place in the TC by producing an additional unit. MR (Marginal Revenue) means the change in TR (Total Revenue) that takes place by selling an additional unit. As long as the cost of production of an additional unit is less than the additional revenue available from its sale, the firm shall go on increasing its output. However, with the increase in the output MC keeps on increasing. With the result, the gap between MR and MC declines and a point comes where they are equal. This is the point of equilibrium. If a firm increases its output beyond this point, MC will be greater than MR resulting in decline in profit. Therefore, as shown in the diagram, the equilibrium output is OQ, where MR = MC (MR relates to perfect competition). 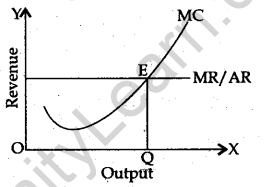 SECTION B
Question.27. Calculate “sales” from the following data: