Question 1.
What are the life sustaining elements present on the earth?
Answer:

Lithosphere: The solid portion of the earth is Lithosphere. In Greek Litho means stone or rock. It means the sphere made of rocks is termed as Lithosphere.

Atmosphere: The gaseous envelope surrounding the earth is Atmosphere. In Greek ‘atmo’ means air. The sphere made of air is atmosphere.

Hydrosphere: The area containing water is called Hydrosphere. Word, Hydrosphere has been derived from the Greek word ‘Hydro’ which means water. Hydrosphere contains water in all its forms.

Biosphere has been derived from the Greek word ‘Bio’. It includes all parts of earth where all types of organisms live. It is the narrow zone of contact of land, water and air where all forms of life are found.

All the four realms are not separate entities, they are considerably intermingled.

Question 3.
Define atmosphere. What is its importance to us?
Answer:

Question 6.
What is air pressure? How is wind formed?
Answer:

Question 7.
What is the biosphere? Give its major features.
Answer:
Biosphere.

Question 1.
Explain the layers of the Atmosphere.
Answer: 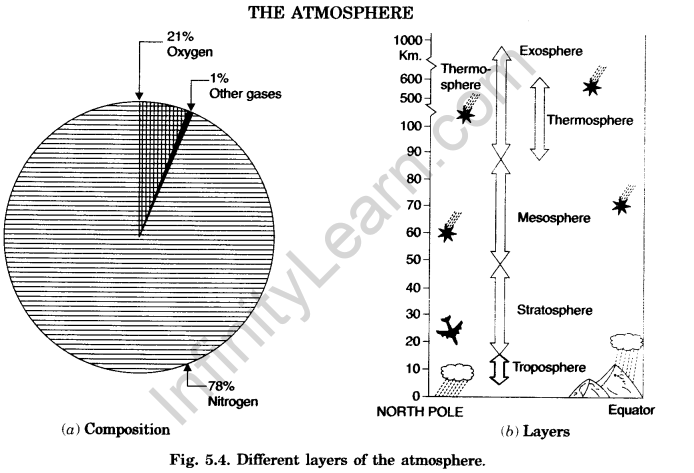 Question 2.
Discuss the organisms found in the Biosphere.
Answer:

The growth of human population is a major cause of change in the biosphere. The growing population requires space for living. This leads to increase of silt in rivers that results ultimately into floods.

Question 4.
Which are the Seven Continents of the world? Give a brief description of each of them.
Answer:
There are seven major continents, namely:
Asia, Europe, Africa, North America, South America, Australia and Antarctica. 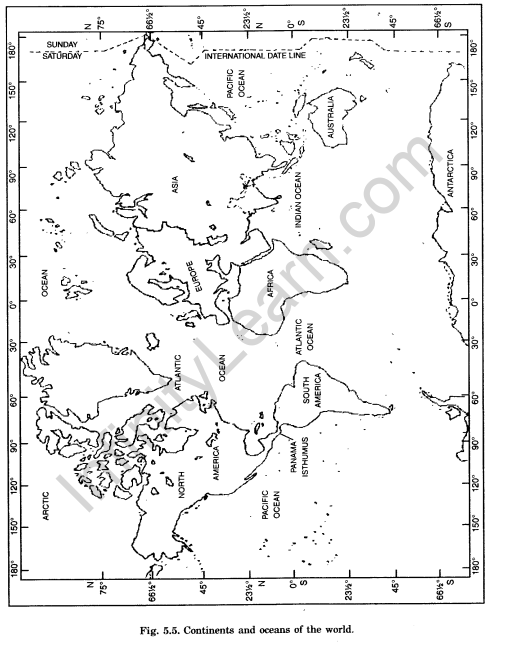 Question 5.
Why is the earth called the blue planet?
Answer:

The Atlantic Ocean is the second largest ocean of the world.

The Indian Ocean is the only ocean which has been named after India.

The Arctic Ocean is located within the Arctic circle and surrounds the North Pole.

Question 1.
Which is the earth consisting of solid portion?
(a) The Atmosphere
(b) Hydrosphere
(c) The Lithosphere
(d) All of these
Answer:
The Lithosphere

Question 2.
Which is the largest continent?
(a) Asia
(b) Africa
(c)Australia
(d) None of these
Answer:
Asia

Question 5.
The Arctic Circle passes through
(a) Asia
(b) Europe
(c) North America
(d) All of these
Answer:
All of these

Question 6.
Which longest river flows through Africa?
(a) The Ganga
(b) The Yamuna
(c) The Nile
(d)None of these
Answer:
The Nile

Question 7.
Which of the following is the smallest continent?
(a) Africa
(b) Asia
(c) Australia
(d) Antarctica
Answer:
Australia

Question 9.
Why do humans not use the ocean water?
(a) Too sour
(b) Too salty
(c) Too sweet
(d) All of these
Answer:
Too salty

Question 10.
The earth surrounded by a layer of gases is called
(a) The lithosphere
(b) The atmosphere
(c) The hydrosphere
(d) All of these
Answer:
The atmosphere

Question 11.
Which gas is the major constituent of the atmosphere by percentage?
(a) Oxygen
(b) Carbon dioxide
(c) Carbon monoxide
(d) Nitrogen
Answer:
Nitrogen