Mixtures and Ways of Separating Mixtures

A mixture is a combination of two or more substances that are not chemically combined. The substances in a mixture can be either elements or compounds.

Another way to separate a mixture is to use a chemical reaction. When two substances react chemically, they form a new compound. The new compound can be separated from the original substances using a physical property. 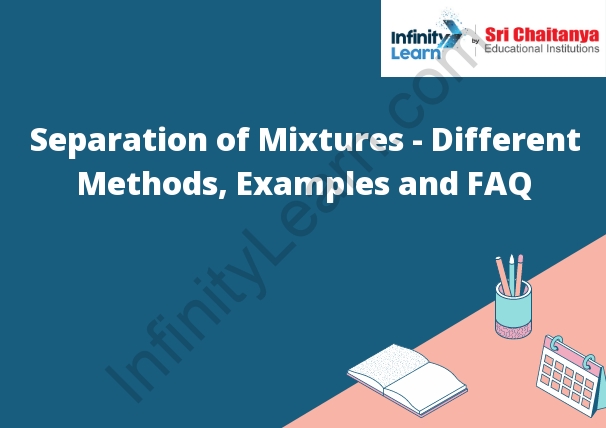 A mixture is a material composed of two or more substances that are mixed together but not combined chemically. The substances in a mixture can be visible, like salt and pepper in a shaker, or they can be invisible, like the oxygen and nitrogen in the air.

A homogeneous mixture is a type of mixture where the substances are evenly mixed. For example, if you mix a spoonful of sugar into a glass of water, the sugar will be evenly mixed throughout the water.

Methods of Separation of Mixtures

There are many methods of separation of mixtures, but the most common are distillation, filtration, and chromatography.

Distillation is a process that uses heat to vaporize a liquid, and then the vapor is cooled and condensed back into a liquid. This process can be used to separate a mixture of liquids into its component parts.

Filtration is a process that uses a filter to remove solid particles from a liquid or gas. This can be used to separate a mixture of solids and liquids, or a mixture of gases.

Chromatography is a process that uses a solvent to dissolve a substance, and then the solution is passed through a column of material. The column will separate the substances based on their different rates of movement through the material.

There are many ways to separate mixtures. Some common methods are:

1. Distillation: This process uses heat to vaporize the liquid in the mixture, and then the vapor is cooled to condense it back into a liquid. This method can be used to separate liquids with different boiling points.

2. Filtration: This process uses a filter to separate out the solid particles from the liquid mixture.

3. Chromatography: This process uses a solvent to dissolve the mixture, and then the different components are separated by their different rates of travel through a paper or other type of filter.

4. Centrifugation: This process uses centrifugal force to separate the components of a mixture by their different densities.

A separatory funnel is a piece of laboratory glassware that is used to separate two immiscible liquids. The funnel has a stopcock on the bottom that can be opened and closed to control the flow of liquids. The funnel also has a glass tube that extends up the side of the funnel. This tube is used to hold the liquids in the funnel while they are being separated.

A technique used for the separation of mixtures into their component parts. A mixture is dissolved in a solvent, which is then passed through a column packed with a solid material. The different components of the mixture are then separated according to their different rates of diffusion through the column.

The water cycle is the continuous movement of water on, above, and below the surface of the Earth. The sun provides the energy that drives the water cycle, and the Earth’s atmosphere acts as a water reservoir.

In the Earth’s atmosphere, water is constantly evaporating from the surface of the oceans, lakes, and rivers. Water vapor rises into the air, where it encounters cooler temperatures. The water vapor begins to condense, forming tiny water droplets. These droplets gradually grow in size, and eventually fall back to the Earth as precipitation. Some of the precipitation falls back into the oceans and lakes, while some of it flows overland as rivers and streams. The water that flows overland eventually seeps into the ground, where it becomes groundwater.

Groundwater can remain in the ground for long periods of time, slowly making its way back to the surface. When it reaches the surface, it can flow back into the oceans and lakes, or it can evaporate and start the water cycle all over again.

A simple distillation apparatus is shown in the figure. The apparatus consists of a flask, a condenser, and a collecting flask. The apparatus is set up as shown in the figure. The flask is filled with the water to be distilled. The water is heated until it boils. The vaporized water rises and passes through the condenser. The cooled vaporized water condenses and is collected in the collecting flask.

Fractional distillation is the most common technique for separating a mixture of liquids into its component parts, or fractions. The mixture is heated until the liquids evaporate, and the vapor is then cooled and condensed back into liquid form. The different liquids will condense at different temperatures, allowing them to be separated. This technique is used extensively in the petroleum industry to separate crude oil into its various component parts.