This is a summary of the chapter ‘Two Stories about Flying’, from the Class 10 English First Flight textbook. The chapter is divided into two stories, as follows:

The young seagull just couldn’t muster up the courage to flap his wings and fly off the ledge. He would run to the brink of it and cowardice would overtake him. His brothers and little sister with tinier wings managed to flap their ways into taking the plunge, despite the great expanse of sea present miles down off the ledge. His parents had even resolved to brand the young gull shrilly and used starvation as a threat if he didn’t fly away. He would bend his head and run back to the little hole under the ledge where he would sleep.

For the past 24 hours, no one had come near him as his parents were busy perfecting his siblings’ art of flight. His brother even managed to catch his first herring, much to the joy of his parents. All morning, his family walked on the big plateau and mocked the young gull’s fear. 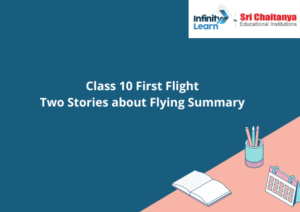 His ledge that faced the south shone under the sunlight. He tip-toed to the brink of the ledge and noticed his siblings asleep with their heads sunk into their necks while his father tidied the feather on his back. The only one looking at the young gull was his mother, who was also busy tearing apart the piece of fish just the way the young gull liked. The sight of food maddened the hungry young gull, as he cried and begged for his mother to fetch him some too.

After a minute or so, he screamed joyously when he saw his mother approach him with a piece of the fish. He leaned out eagerly and tapped his feet on the rock while waiting for his food. Strangely though, his mother halted right in front of him with motionless wings. Crazed with hunger, he made a dive and fell outwards and downwards into space. He felt the tip of his wings cut through the air and found himself not being afraid anymore. He flapped his wings and soared upwards. Soon the rest of the family happily joined him.

He cawed excitedly and saw the vast green sea below him. His legs sank into it, exhausted from all the hunger and the flying, he let his feet sink easily and found himself afloat. At this sight, the family screamed and praised the young gull while offering him scraps of dogfish. This is how he made his first flight.

As the author flew his old Dakota plane over France on his voyage to England, he made a note of the stars in the clear sky and how the moon was coming up in the east. He dreamt of his holiday with his family and peaked a glance at his watch at one-thirty in the morning.

He called the Paris Control as soon as he saw the lights of the big city ahead of him, to inform them of his approach. They commanded him to twelve degrees west towards England, and with his last fuel tank, he did. He joyed at the thought of feasting on a good English breakfast on his arrival.

After 150 kilometers of his departure, he saw huge black clouds standing like mountains in front of him. He didn’t have enough fuel to fly around it, and simply couldn’t fly up over them. The thought of a tempting breakfast motivated him to take the risk and flew right into the storm.

The interiors of the clouds were suddenly black and Dakota jumped and twisted in the air. The compass, along with all the other instruments, were abruptly dead. The radio was dead as well, and incapable of contacting Paris Control. Somewhere, in the midst of the darkness, he saw another plane without any lights on its wings. It flew next to Dakota, and the pilot of the other plane signaled him to follow.

Like an obedient child, he happily followed the other pilot. Half an hour passed by, and this strange airplane was still in front of him. The amount of fuel left would resist his flight for a maximum of ten minutes, and this made him feel frightened again.

All of a sudden, he was out of the clouds and saw two straight lines of light in front of him and realized that it was a runway. The author looked back to find his friend in the black airplane, but couldn’t spot it. As soon as he got off, he questioned a woman in the Control about the location of another pilot with the intention of thanking him. At this, he received a bizarre reaction from the woman as she laughed it off, and told him that no other airplanes were flying tonight.

Left confused and bewildered, he couldn’t understand who helped him arrive safely and drove the black airplane without any lights!