The best way to understand a term is to get closer to its etymology. The word ‘corruption’ is originally derived from the Latin word ‘corruptus’, which means ‘to destroy or abuse’. True to its original definition, it still is used to connote all illegal and unethical ways of using power. In addition to that, it is the misuse of power unduly for greedy and selfish purposes. There is no right thumb rule to underline corruption, it has various forms and methods to it.

Bribery is the most prevalent form of corruption. It is the exchange of gifts and favors in order to get work done. These favors can be of any type, for example, expensive gifts, money, company shares, sexual favors, political benefits, etc. They can be used to suppress terrible crimes committed by a rich and influential group of people so as to maintain their reputation the same in society.

Embezzlement is another kind of corruption that is quite famous among the high parties. It comes under financial fraud. It refers to the misappropriation of funds placed in a trust. Most often, more than one person is involved in this task and it is done with the sole purpose of theft.

Coming on to the global scale, a graft is a kind of corruption common on the global level. It is very common and unrightful when the position holders take undue advantage of their status. In graft, a political person with power illegally uses his position for the satisfaction of undue personal gains.

Extortion is another major form of corruption. Extortion, like the literal meaning suggests, is the unethical way of obtaining property, money, etc. Next in the queue of types of corruption is favoritism. We have all felt how it feels to be in a biased situation during our school days. On the global level, it can be called nepotism which is quite prevalent in all industries. It happens when a person with fame and recognition favors his own relatives and friends when it comes to job opportunities, money matters, or any favourable outcomes. It is a very unfair practice that really hampers the future of many people who might be better than them but end up losing out on opportunities due to their lack of personal contacts in the industry.

Lastly, we have influence-peddling which is curbing and deteriorating the roots of our nation. This refers to illegitimately using one’s influence on or with the government. As a result of this, everything comes down to the power holders. They have power and they can do anything. 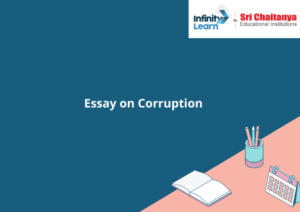 What is the Root Cause of Corruption?

Poor Financial Condition: People often get into adverse conditions and indulge in the petty task of accepting bribes just to get over their economically poor conditions. You should always remember that a bribe taken from somebody cannot make you a millionaire, rather you will be dragged to the pits of the worst condition later on.

Poor Ethics: There are always two ways of doing a thing – the right way and the wrong way. Your choice depends on your morals and ethics. Some people, no matter how hard and unachievable the path might seem, will always take the path of honesty, while the rest will use cheap tactics and get their work done anyhow. The latter case is more likely to contribute to corruption.

More Regulations and Levels: Nowadays, we have the formulae of decentralization in all departments. If you wish to ask something, then there is a proper procedure to do it. That is where so many people use the money to get work done easily without taking the long route of the procedure. This is a major fault of our system.

How to Eradicate Corruption?

Never Take Bribe or Give Bribe: Change begins from home. If you take bribes then how can you expect others to be good and honest? Give your best, accept failures but never give bribes. At the same time, taking a bribe should never be accepted as an option. One should always remain true to their work and ensure that no wrongdoing occurs, because once money gets involved, priorities shift and your effectiveness at your position is compromised.

Always Report Corruption: Though we might not ourselves indulge in this malpractice of bribery, we do live like ignorant citizens. If you ever see or know about a case of unreported bribery near you, it becomes a responsibility to report it to the concerned authorities so that corruption can be combated at the most grassroot levels and upwards.

Action Against Corruption: The government should make even more stringent laws for people who take undue advantage of their position and resort to corruption. With consequences, people who indulge in such wrongdoing will think twice before getting into it.

There is a lot that we can do to save our country from this evil of corruption. But before that, we need to break the silence about it. Speak out and set an example of good, moralistic behaviour being the sole way to achieve success in life.