The tiger is a wild animal. Panthera tigris is its scientific name. It is the biggest living species of cat and belongs to the “Felidae” family. It has a distinctive look, with orange-brown fur on its exterior body and black stripes running vertically across it. It is a carnivore, meaning it eats the flesh of the prey it hunts. The Indian subcontinent is where you’ll find it the most. The behavior, food, hunting techniques, and other aspects of tigers will be described in this tiger essay.

Tigers are predominantly found in the deep woods of West Bengal’s Sunderbans, the states of Tripura and Assam, and a few locations in central India. The body of a tiger is huge and powerful, with brown fur and black vertical stripes. It has four legs, a large head, a long striped tail, and a pair of terrifying eyes that glow in the dark. It has padded claws and sharp claws on its feet. With its four strong teeth, it hunts and chews on its prey. 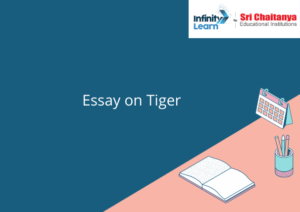 Tiger is the National Animal

India’s national animal is the tiger. As a result, tigers are regarded as sacred animals in India. Several folkloric tales include tiger stories. In Hindu mythology, tigers are frequently used as vahanas, or mounts, by Indian goddesses such as Durga. Tigers are magnificent creatures with unmatched courage. In contrast to lions, tigers are recluse animals in their natural habitat. Tigers, despite their bravery and power, prefer to stay inside their areas. A tiger’s house is known as a “lair.” As a result, the majority of tigers live in their lair and territory.

The female tiger is known as a “tigress”, while her offspring is known as a “cub”. Male tigers, unlike lions, do not stay in their caves to protect themselves from attack. During the day, both tigers and tigresses hunt, and at night, they sleep. The roar of a tiger is tremendously loud and powerful. It uses its roars to communicate with the other tigers. Tigers are extremely intelligent creatures. They use a variety of hunting techniques, including hiding behind dense shrubs and making a surprise attack on their target. Deer, bullocks, antelope, and other small animals are commonly eaten by tigers. Tigers are commonly referred to as man-eaters, although they only prey on humans after they have been harmed by humans or when they are unable to find another animal to prey on.

Although this tiger essay discusses the tiger’s power, it would be incomplete without emphasizing the tigers’ kindness and generosity. Tigers are said to be kind creatures. They frequently share prey with tigers outside of their territory. A male tiger often raises cubs without the assistance of the tigress. Tigers also raise orphaned cubs that belong to other tigers.

Tigers are known to be very kind to unrelated tigers. Humans, on the other hand, have not been so nice to tigers. People abuse tigers for their valuable skin, nails, and bones. Tigers are one of the world’s most endangered species. Humans hunt them for their skin, nails, and bones, which are all valuable. Humans also catch tigers and confine them in zoos, away from their natural habitats, making the animals unhappy.

They must be allowed to live and reproduce in their original habitat, which should also be protected. In a forest ecosystem, tigers, like lions, are tertiary or third-level consumers. They eat primary (herbivores) and secondary (carnivores) consumers and help in energy transfer across the food chain. As a result, tigers must be maintained from an ecological viewpoint to maintain the ecosystem balance.

Tiger attacks are not uncommon in places of India where forests and residential areas are near together. When a tiger grows old or is unable to locate food in the wild, it frequently goes to such living areas for food and becomes a man-eater.

The famous hunter Jim Corbett, whose name is also a national park in Central India, documented such legends concerning man-eaters. During British time, Corbett was well-known for his hunting abilities, and he is still well-respected in many rural communities for taking down man-eaters. While tigers pose a threat to humans in one aspect, the bigger point here is that humans provide a greater threat to the lives of such creatures. The rate at which forests are removed for construction projects, the rise of eco-tourism, and the frequency of forest safaris, all contribute to the disruption of the natural habitat of the tiger. All these reasons cause the tiger to venture into human territory in search of food.

The behavior of tigers, their diet, and their hunting habits have all been described in this essay. It may be concluded from this tiger essay that tigers are extremely essential wildlife creatures.