The Cold Within Summary

You will read The Cold Within Summary in this article. It is a famous poem written by American poet James Patrick Kinney in the 1960s. Countless church newsletters, websites, and teaching courses featured it. It was also featured in journals and newspapers. For the first time, it was turned down because it was deemed controversial. It later grew in popularity across the United States. The poem is simple yet effective. It depicts the consequences of allowing one’s prejudices to guide one’s decisions. The poem begins with six persons caught in the freezing cold by coincidence. Each of them was holding a wooden stick. They were kept warm by a fire. However, it was about to die at any moment, and no one was willing to hand over his log. Each of them had their reasons for doing so.

ICSE Class 10 – The Cold Within Summary

The Cold Within Summary is a brief explanation of the poem. It starts with a lady who refused to protect a black man in the group. This demonstrates a racist mindset. This attitude will eventually backfire on the person. 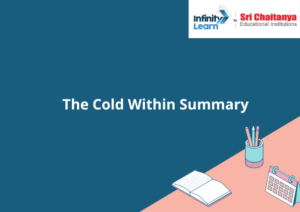 The other man noticed someone of a different religion. As a result, he refused to help him. This demonstrates that he discriminated against people of other religions in his mind.

The third was a poor person. He was wearing rags. He despised the rich and referred to them as “lazy.” Thus, he drew his coat closer to his body to be warm while keeping his log away.

Furthermore, the rich person was unwilling to help the poor. He believed that the poor deserved nothing. There was also a black man present. He was filled with a feeling of revenge toward the white person.

Moreover, the last man was a selfish individual. He used to only contribute if he thought it would be helpful to him, that is if he could get something from it.

Each person who was stranded in the cold was a sinner. Their prejudices were symbolized by the logs in their hands. None of them were willing to give it up. They had no idea that their feelings would lead them to kill themselves. Racism, jealousy, arrogance, and revenge were all sins he or she was committing. The sticks they clutched in their hands appeared to be symbols of revenge and hatred. They lacked the human aspect of being. They were all ungrateful in their actions. As a result of their self-centered behavior, they all invited death upon themselves. The coldness of their hearts is defined as feelings of revenge and hatred.

The fire, on the other hand, is used to represent the common good. It conveys the message that everyone should put aside their thoughts of hatred, selfishness, and hostility toward people of other races or castes and help one another. This is the only means through which humans may achieve salvation. People become victims of their downfall when they fail to appreciate one another, hold grudges against one another, and discriminate against one another.

The poet attempts to describe the impact of prejudices on one’s life in this poem, The Cold Within. When people allow their prejudices to control their behavior, they pay a price. We become insensitive to other people as a result of our biases, and we tend to act inhumanely. We lose compassion when we consider others as inferior or hostile. We eventually lose everything.