Introduction to the Chapter

‘The Happy Prince’ is a short story written by Oscar Wilde. It tells the narrative of a statue known as The Happy Prince, which is encrusted with gold and several magnificent diamonds. It offers a fantastic perspective of the city. A swallow bird seeks refuge behind the statue one day and realises the prince is not joyful, but sorrowful.

The bird befriends the prince and attempts to make him happy by supporting him in his goal to alleviate other people’s pain. It removes the ruby, sapphire, and other valuable jewels of the statue and distributes them to the poor and needy. 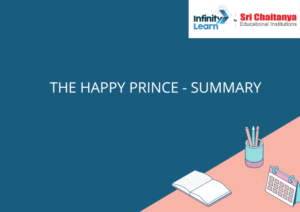 Oscar Wilde was an Anglo-Irish dramatist, writer, poet, and critic who lived from 1854 to 1900. He is regarded as one of the most important Victorian playwrights. He wrote 9 plays, a novel, and several poems, short tales, and articles during his lifetime.

Summary of the Chapter

‘The Happy Prince’ is a story that explores social injustice, the redeeming power of love, and the loss of innocence. In this story, we encounter a statue that was once a real Prince. The Prince was a joyful person when he was alive. He was a young royal who was unaware of human suffering since he resided in the palace. He had a lot of good times in his life. His statue was erected at the top of a tall column in the city after his death. The statue was decorated in exquisite gold leaves all around, with two sparkling sapphires for eyes and a big red ruby glistening on his sword hilt.

The Happy Prince monument was lovely, and everyone in the city was delighted to behold their Prince. But once the statue was put up, the Prince was finally able to view all of the tragedies and hardships that the regular people endured in their daily lives because he was situated high above the city, on a towering column.

During his lifetime, however, the Prince was unaware of them. This made the Prince, who had earlier been happy, very unhappy. His eyes welled up, and tears streamed down his golden cheeks in huge drips. A small swallow, who had alighted between the feet of the Happy Prince to spend the night there, became anxious to know where the drops of water were falling from. When he looked up, he noticed the Happy Prince’s eyes were filled with tears.

The bird felt sorry for the Prince and offered to help him in his efforts to alleviate the misery of the common people. He became the Prince’s messenger and consented to remove the magnificent gold and diamonds of his statue so that they may be distributed to the poor and needy.

He began by removing the ruby from the Prince’s sword and presenting it to the seamstress, who was unable to feed her sick kid due to a lack of funds. Then, he took a sapphire from one of the statue’s eyes and gave it to a playwright who was too poor to keep writing throughout the winter since he couldn’t even create a fire. He was also ravenous and exhausted.

The Prince once witnessed a match girl being punished by her father for allowing her matches to fall into the gutter. The Prince’s heart swelled with compassion for the young lady. He ordered the swallow to take out his other eye and assist the girl right away.

The swallow, on the other hand, was not ready to do so because doing so would render the Prince entirely blind. He took out the Prince’s other eye after being persuaded, swooped past the match girl, and placed the jewel into the palm of her hand. The small bird made the decision not to leave the presence of the blinded Happy Prince. The Prince could no longer see the sorrows or pains, but he knew they were there. As a result, he told the bird to remove the pure gold from his body and distribute it to the needy.

The bird heeded his teachings and peeled away at the gold leaf by leaf, until the Happy Prince seemed dull and grey. Then came the snow, and the poor little swallow became older and colder. He did not, however, abandon the Prince. He eventually became feeble and died of exhaustion and exposure. A strange crack sounded inside the statue at that very time, as if something had shattered.

It was, in truth, the leaden heart that had shattered when the gentle and compassionate swallow had died. The statue was no longer attractive or functional. It was completely desolate. As a result, the Mayor and the Town Council took it down. The statue was then melted in a furnace, yet the broken heart remained unmelted. So they threw it on the same dust heap as the deceased swallow.

When God asked one of His Angels to bring him the city’s two most valuable items, the Angel delivered the leaden heart and the dead bird. God greeted the two in Paradise and praised them as wonderful creations.