The rainy season is loved and enjoyed by all. The joys of the rainy season are so common that many times we are asked to write essays on the rainy season by our teachers in schools. So many authors have written about it, which makes this season even more interesting.

What is the Rainy Season?

Also known as monsoon, the rainy season is a season cherished by all of us. It infuses happiness and brings back memories of our childhood in our lives. As children, we used to thoroughly enjoy the rain and it felt free and reckless when we would go out and play in the puddles on the streets.

In India, as much as the rainy season is enjoyed this way, it is a season that is of utmost importance for the livelihood of more than half of the population. The importance can be estimated from the fact that the rain lord is worshipped in the summers by the farmers for the wellness of their seasoned crops.

The Himalayas are the main reason for the monsoon in India. The Himalayan Range stops the winds containing moisture and this leads to the formation of clouds. They then travel to north-eastern states which causes rain there. From there, the monsoon winds are carried to different states through the ocean.

Rain gives new birth to life on earth. With its showers, everything experiences a sense of freshness that can’t be put into words. The Earth, with all the biodiversity of plants, trees, animals, birds, and human beings, dances to the song of rain. 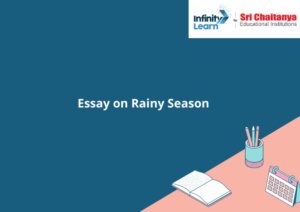 Why Do We Have a Rainy Season?

When the Earth’s axis tilts towards the sun, it is summer for that hemisphere. When the earth’s axis points away, then you may expect winters to follow. This is the major season for the subtropical climate of India. On top of that, we do have a rainy season in India as well. Why does that happen?

Now, these winds carry a lot of moisture in them as they have traveled their way from the Indian Ocean. This then precipitates over the midlands of India and nearby countries, which is most commonly called the “Rainy Season”.

Why Do We Need a Rainy Season?

We need a rainy season every year for a variety of reasons. Some of the most important ones are mentioned below:

What Makes the Rainy Season the Most Important Season?

Benjamin Franklin once said, “When the well is dry, we know the worth of water”. He meant that till the time won’t come when we will cry to get water at our homes, till then we won’t know and understand the value of water. So, are we this stubborn and naive to understand the simple need of saving water? If not, then let’s start saving water today!