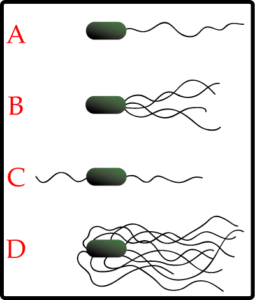 Flagella have a whip-like appearance that helps to keep the cell in the fluid. Some special flagella are used in a number of living things such as sensory organs that can sense changes in pH and temperature.

They are filamentous structures found in archaea, bacteria, and eukaryotes.

Flagella is a helical structure made up of flagellin proteins. The structure of the flagella is divided into three parts:

It consists of rings surrounded by a pair of proteins called MotB. Rings include:

L-ring: The outer ring is encased in a layer of lipopolysaccharide and is found in gram + ve cells.

P-ring: Infused with a layer of peptidoglycan.

C-ring: Inserted into the cytoplasm

It’s a wide area at the bottom of the line.

It connects the filament to the motor protein at the base.

The length of the chicken is great for gram + ve bacteria.

A structure similar to thin hair from a point.

There are four different types of flagella:

One flagellum at one end or another. These are known as polar flagellum and can rotate clockwise and counterclockwise. Clockwise movement moves the living one forward while the opposite movement of the clock pulls it backward.

Several flagella at the end of one living thing or another. These are known as polar flagellum and can rotate clockwise and counterclockwise. Clockwise movement moves the living one forward while the opposite movement of the clock pulls it backward.

One flagellum in both ends of living organisms. These are known as polar flagellum and can rotate clockwise and counterclockwise. Clockwise movement moves the living one forward while the opposite movement of the clock pulls it backward.

They help the living thing on the move.

They act as sensory organs to detect temperature and pH changes.

Recent research has confirmed that the flagella are also used as a secret organelle. For example, in Chlamydomonas.

It is grouped in the protozoans, Ciliata class, in the Ciliated epithelium of Metazoa, and other classes.

It is usually present on the outer surface of the body such as the caterpillar Mollusca, Annelida, and Nemertines, thus helping to escape.

It has structures and functions similar to those of the flagella, but the cilium is shorter and the movement is very different.

They are there in their abundance.

They combine into protozoans to form cirri.

These are present in protozoans, Metazoa choanocyte cells, and in other classes – in plants, gamete cells, and algae.

They are very tall.

They are usually found at the end of a cell.

Flagella usually do not mix.