In the first segment of chapter Algebra, we will learn the basics using matchstick patterns.

Algebra is the branch of mathematics that deals with letters representing unknown numbers. We will understand how it is done using matchsticks.

How to use matchstick patterns to understand the basics of algebra?

Say we have to form an ‘L’ shaped pattern using matchsticks. This can be done by placing two matchsticks perpendicular to each other as shown below. 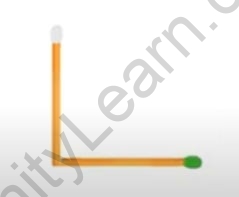 To add one more ‘L’ to this pattern 2 more matchsticks are placed in the same way.

This can be repeated innumerable times. But, to construct these patterns a lot of matchsticks will be required.

To find out the number of matchsticks needed to form a particular number of ‘L’ shapes, we use

algebra. Let us understand this.

For constructing one ‘L’, two matchsticks are needed

The table below shows the pattern:

Based on this we can say that,

So, the formula for constructing the matchstick pattern is given as:

Number of matchsticks required = 2 x n, where ‘n’ is the number of ‘L’s in the pattern

What is a Variable?

A Variable is a symbol or letter that does not have any fixed value and is used to represent an unknown number.

Variables are used to write formulas and equations.

In the matchstick pattern example, we can say that ‘n’ is a variable. Its value can be changed

depending on our requirements.

In the next segment of Class 6 Maths, we will look at more examples of variables.