In the previous segment, we were introduced to the concept of Angles in geometry. We will now learn the method of Measurement of angles.

How are angles measured? 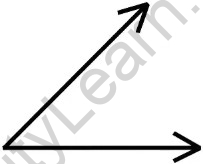 Arms of an angle

When measuring angles, there are two directions of the angle of measurement with respect to the initial arm: