• Introduction
Motion is one of the significant topics in physics. Everything in the universe moves. It might only be a small amount of movement and very-very slow, but movement does happen. Even if you appear to be standing still, the Earth is moving around the sun, and the sun is moving around our galaxy.
“An object is said to be in motion if its position changes with time”.
The concept of motion is a re’ live one and a body that may be in motion relative to one reference system, may be at rest relative to another.
There are two branches in physics that examine the motion of an object.
(i) Kinematics: It describes the motion of objects, without looking at the cause of the motion.
(ii) Dynamics: It relates the motion of objects to the forces which cause them.
• Point Object
If the length covered by the objects are very large in comparison to the size of the objects, the objects are considered point objects.
• Reference Systems
The motion of a particle is always described with respect to a reference system. A reference system is made by taking an arbitrary point as origin and imagining a co-ordinate system to be attached to it. This co-ordinate system chosen for a given problem constitutes the reference system for it. We generally choose a co-ordinate system attached to the earth as the reference system for most of the problems.
• Total Path Length (Distance)
For a particle in motion the total length of the actual path traversed between initial and final positions of the particle is known as the ‘total path length’ or distance covered by it.
• Types of Motion
In order to completely describe the motion of an object, we need to specify its position. For this, we need to know the position co-ordinates. In some cases, three position co-ordinates are required, while in some cases two or one position co-ordinate is required.
Based on these, motion can be classified as:
(i) One dimensional motion. A particle moving along a straight-line or a path is said to undergo one dimensional motion. For example, motion of a train along a straight line, freely falling body under gravity etc.
(ii) Two dimensional motion. A particle moving in a plane is said to undergo two dimensional motion. For example, motion of a shell fired by a gun, carrom board coins etc.
(iii) Three dimensional motion. A particle moving in space is said to undergo three dimensional motion. For example, motion of a kite in sky, motion of aeroplane etc.
• Displacement
Displacement of a particle in a given time is defined as the change in the position of particle in a particular direction during that time. It is given by a vector drawn from its initial position to its final position.
• Factors Distinguishing Displacement from Distance
—> Displacement has direction. Distance does not have direction.
—> The magnitude of displacement can be both positive and negative.
—> Distance is always positive. It never decreases with time.
—> Distance ≥ | Displacement | 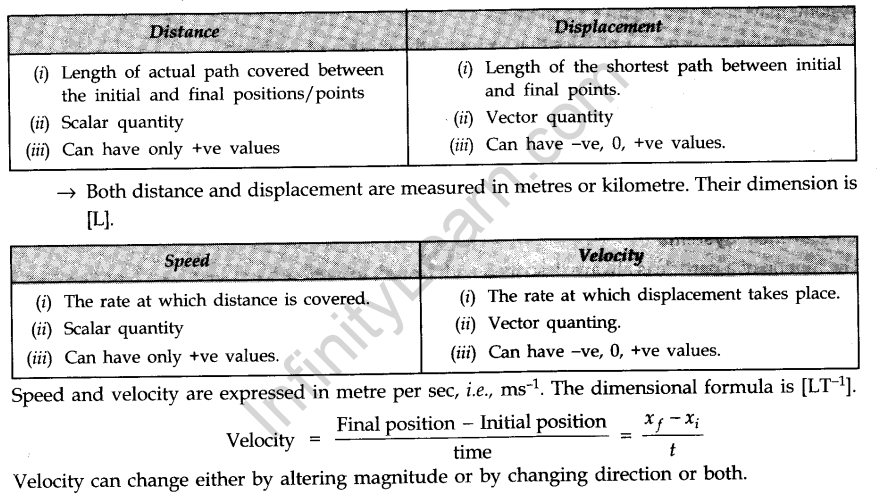 • Acceleration
The rate at which velocity changes is called acceleration.

• Uniform Acceleration
If an object undergoes equal changes in velocity in equal time intervals it is called uniform acceleration.
• Average and Instantaneous Acceleration
Average Accelerating. It is the change in the velocity divided by the time-interval during which the change occurs.

Instantaneous Acceleration. It is defined as the limit of the average acceleration as the time-interval Δt goes to zero.

• Kinematical Graphs
The ‘displacement-time’ and the ‘velocity-time’ graphs of a particle are often used to provide us with a visual representation of the motion of a particle. The ‘shape’ of the graphs depends on the initial ‘co-ordinates’ and the ‘nature’ of the acceleration of the particle (Fig.)

The following general results are always valid
(i) The slope of the displacement-time graph at any instant gives the speed of the particle at that instant.
(ii) The slope of the velocity-time graph at any instant gives the magnitude of the acceleration of the particle at that instant.
(iii) The area enclosed by the velocity-time graph, the time-axis and the two co-ordinates at ,time instants t1 to t2 gives the distance moved by the particle in the time-interval from t1 to t2.
• Equations of Motion for Uniformly Accelerated Motion
For uniformly accelerated motion, some simple equations can be derived that relate displacement (x), time taken (f), initial velocity (u), final velocity (v) and acceleration (a). Following equation gives a relation between final and initial velocities v and u of an object moving with uniform acceleration a: v = u + at 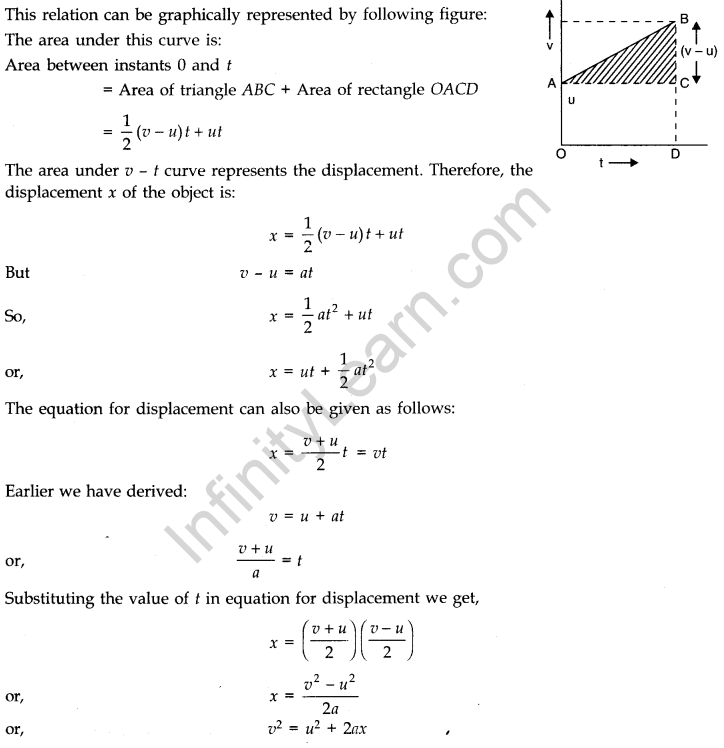 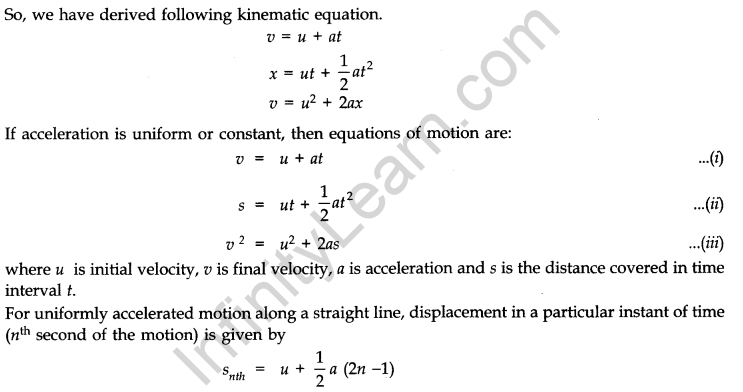 • Suppose a body is projected vertically upward from a point A with velocity u. 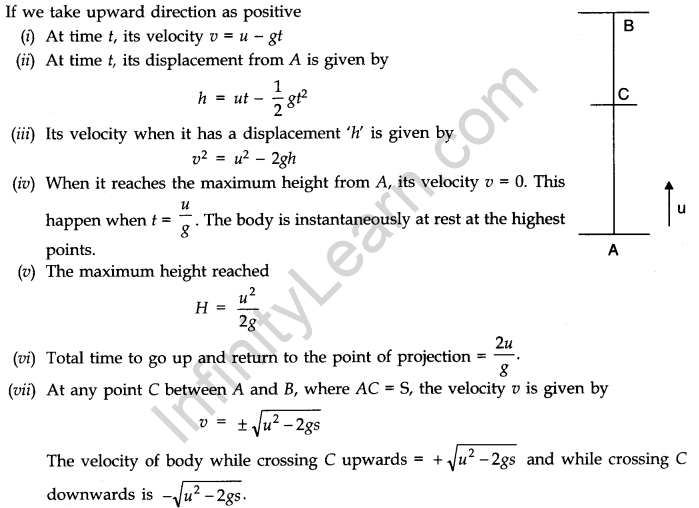 In some problems it is convenient to take the downward direction as positive, in such case all the measurements in downward direction are considered as positive i.e., acceleration will be +g. But sometimes we may need to take upward as positive and if such case acceleration will be -g.
• Relative Velocity
Relative velocity of an object A with respect to another object B is the time rate at which the object A changes its position with respect to the object B.