• Organic Chemistry
Organic chemistry is the branch of chemistry that deals with the study of hydrocarbons and their derivatives.
The Shapes of Carbon Compounds:
In organic or carbon compounds, s and p orbitals are involved in hybridisation. This leads to y three types of hybridisation which are sp3(in alkanes) – Tetrahedral in shape sp2(in alkenes) – Planar structure sp(in alkynes) – Linear molecule
Functional Group: The functional group are atom or group of atoms joined in a specific manner which determines the chemical properties of the organic compound. The examples are hydroxyl group (—OH), aldehyde group (—CHO) and carboxylic acid group (—COOH) etc. 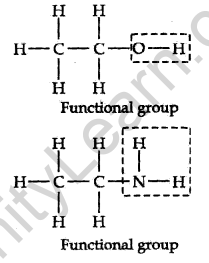 • Homologous Series
A homologous series may be defined as a family of organic compounds having the same functional group, similar chemical properties and the successive members differ from each other in molecular formula by —CH2 units.
The members of a homologous series can be represented by same general molecular formula.
• Nomenclature of Organic Compounds
Common name (Common system): Before the IUPAC system of nomenclature, organic compounds were named after the sources of origin, for example, urea was so named because it was obtained from the urine of mammals. Formic acid was so named since it was extracted from red ants called formica. 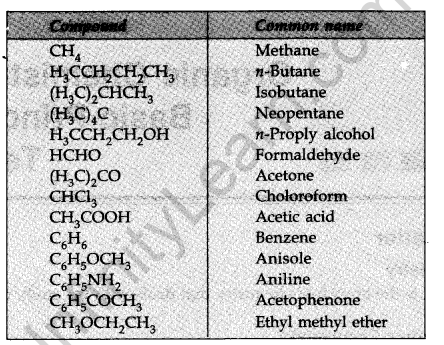 • I UP AC (International Union of Pure and Applied Chemistry) System
According to IUPAC system, the name of an organic compound contains three parts: (i) word root, (ii) suffix, (iii) prefix.
(i) Word root: Word root represents the number of carbon atoms present in the principal chain, which is the longest possible chain of carbon atoms.

(ii) Suffix: Suffix are of two types, primary suffix, secondary suffix.
(a) Primary Suffix: It indicates the type of bond in the carbon atoms.

(b) Secondary Suffix: Secondary suffix is used to represent the functional group.
(iii) Prefix: Prefix is a part of IUPAC name which appears before the word root. Prefix
are of two types:
(a) Primary prefix: For example, primary prefix cyclo is used to differentiate cyclic compounds.

• Isomerism
When there are two or more compounds possessing the same molecular formula but different structural formula and different physical and chemical properties, the phenomenon is called isomerism. Such compounds are called isomers.
It is of two types:
(1) Structural Isomerism
(2) Stereoisomerism
(1) Structural Isomerism: Structural isomerism is shown by compounds having the same molecular formula but different structural formulae differing in the arrangement of atoms.
(2) Stereoisomerism: When isomerism is caused by the different arrangements of atoms or groups in space, the phenomenon is called stereoisomerism. The steroeoisomers have same structural formula but differ in arrangement of atoms in space. Stereoisomerism is of two types:
(i) Geometrical or Cis-Trans Isomerism
(ii) Optical Isomerism
• Fundamental Concepts in Organic Reaction Mechanism
Fission of a covalent bond: A covalent bond can undergo Fission in two ways:
(i) By Homolytic Fission or Homolysis
(ii) By Heterolytic Fission or Heterolysis
Homolytic Fission: In this process each of the atoms acquires one of the bonding electrons.

Electrophile: It is positively charged or neutral species which is electron deficient, e.g.,
He–, H20+, CH3 , NH4+, AICl3 , S03 , CHCl2 , CCI3.
Nucleophile: It is negatively charged or neutral species with lone pair of electrons e.g., (HO–), Cyanide (C = N), H20: R3N, R2NH etc.
Electron Displacement Effects in Covalent Bonds: Electronic displacements in covalent bonds occurs due to the presence of an atom or group of different electronegativity or under the influence of some outside attaching group.
These lead to a number of effects which are as follows:
(i) Inductive effect (ii) Elecromeric effect
(iii) Resonance or Mesomeric effect (iv) Hyperconjugation effect.
Inductive Effect: It involues c electron. The a electrons which form a covalent bond are seldom shared equally between the two atoms. Due to different electronegatively electrons are displaced towards the more electronegative atom.
This introduces a certain degree of polarity in the bond.
The more electronegative atom acquires a small negative charge (δ–). The less electronegative atom acquires a small positive charge (δ+).
Consider the carbon-chlorine bond
As chlorine is more electronegative, it will become negatively charged with respect to the carbon atom.

The inductive effect of C3 upon C2 is significantly less than the effect of the chlorine atom on C.
Resonance Structure: A number of organic compounds cannot be accurately represented by one structure.
For example, benzene is ordinarily represented as

Actual structure of benzene is resonance hybrid of structures I and II.
Another example of resonance is provided by nitromethane (CH3N02) which can be represented by two Lewis structures.

Electromeric Effect (E Effect):
The electrom’eric effect refers to the polarity produced in a multiple bonded compound when it is attacked by a reagent when a double or a triple bond is exposed to an attack by an electrophile E+ (a reagent) the two π electrons which from the π bond are completely transferred to one atom or the other. The electromeric effect is represented as:

Hyperconjugation or No Bond Resonance: When the alkyl group is attached to an unsaturated system such as —CH=CH2 group the order of inductive effect gets reversed. The behaviour can be explained by hyperconjugation effect.
Such structures are arrived at by shifting the bonding electrons from an adjacent C —H bond to the electron deficient carbon. In this way, the positive charge originally on carbon is dispersed to the hydrogen.
This way of electron release by assuming no bond character in the adjacent C—H bond is called No-Bond Resonance or Hyperconjugation.

• Orbital Concept of Hyperconjugation
It involues delocalisation of o electrons of C—H bond of an alkyl group which is attached directly to an atom of unsaturated system or to an atom with an unshared p-orbital.
Let us consider CH3CH2 (ethyl cation) in which the positively charged carbon atom has an empty p-orbital. One of the C—H bonds of the methyl group can align in the plane of this empty p-orbital and electron constituting the C—H bond in plane with this p-orbital can then be delocalised into the empty p-orbital as in Fig.

In general, greater the number of alkyl groups attached to a positively charged carbon atom, the greater is the hyperconjugation. 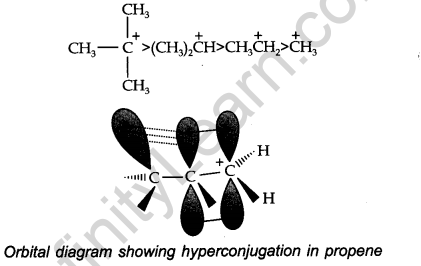 • Qualitative Analysis of Organic Compounds
Detection of Carbon and hydrogen: Put Copper Oxide Test:
The organic substance is mixed intimately with about three times its weight of dry copper oxide. The mixture is then placed in a hard glass test-tube fitted with a bent delivery tube. The other end of which is dipping into lime water in another test tube.
The mixture is heated strongly and the following reactions take place.

Thus if carbon is present it is oxidised to carbon dioxide which turns lime water milky. If hydrogen is also present, it will be oxidised to water droplets on the cooler wall of the test tube.
Detection of other elements
Lassaigne’s test: Nitrogen, sulphur, halogens and phosphorus present in an organic compound are detected by ‘Lassaigne’s test’. Covalent compounds are converted into ionic form by fusing the compound with sodium metal. Following reaction occurs:

Test for Nitrogen:
(i) The substance is heated strongly with sodium metal.
Na + C + N ———–> NaCN
(ii) The water extract of the fused mass is boiled with ferrous sulphate solution

(iii) To the cooled solution is then added a little ferric choride solution and excess of concentrated hydrochloric acid.

The formation of prussian blue or green colouration confirms the presence of nitrogen.
Test for sulphur:
Sodium Test: Sulphur, if present, in the given organic compound, upon fusion with sodium reacts to form sodium sulphide

Thus the sodium extract obtained from the fused mass is tested as:
(i) Add freshly prepared sodium nitroprusside solution. A deep violet colouration indicates sulphur.
(ii) Acidify the portion of the extract with acetic acid and then add lead acetate solution. A black precipitate of lead sulphide confirms the presence of sulphur.

If nitrogen and sulphur both are present in an organic compound, sodium thiocyanate is formed. It gives blood red colour and no prussian blue since there are no free cyanide ions.

Test for Halogens
Sodium Test: Upon fusion with sodium, the halogens in the organic compound are converted to sodium halides.
Cl + Na ——-> NaCl
Br + Na ———> NaBr
I + Na ———>NaI
Acidify a portion of ‘sodium extract’ with dilute nitric acid and add to it silver nitrate solution. White ppt. soluble in ammonia indicates Chlorine.
Yellow ppt. sparingly soluble in ammonia indicates Bromine.
Yellow ppt. insoluble in ammonia indicates Iodine.
When nitrogen or sulphur is also present in the compound, the sodium extract before testing for halogens is boiled with strong nitric acid to decompose the cyanide and the sulphite formed during the sodium fusion. If not removed, these radicals will form a white and black precipitate respectively on the addition of silver nitrate.

Test for phosphorous
The compound is heated with an oxidising agent (sodium peroxide). The phosphorous present in the compound is oxidised to phosphate.
The solution is boiled with HN03 and treated with ammonium molybdate. A yellow coloured ppt. indicates the presence of phosphorous.

The weight of carbon dioxide and water thus formed are determined and the amounts of carbon and hydrogen in the original substance calculated. 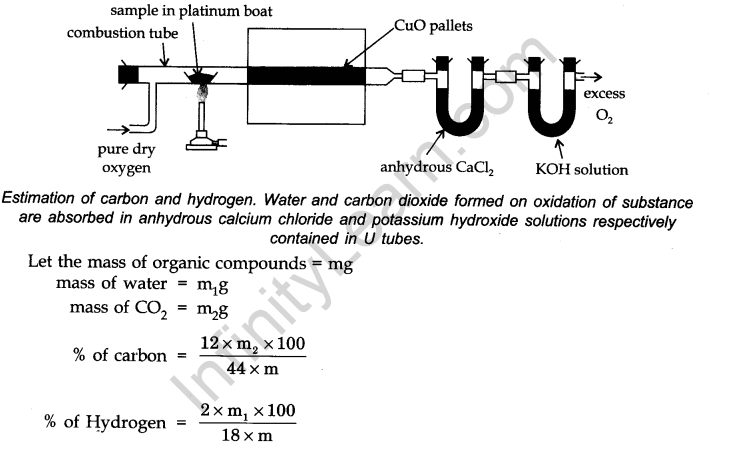 Estimation of Nitrogen
(i) Dumas method: This method is based on fact that the nitrogenous compounds when heated with copper oxide in an atmosphere of carbon dioxide yield free nitrogen,

The traces of oxides of nitrogen, which may be formed in some cases, are reduced to elemental nitrogen by passing over heated copper spiral.
Apparatus can be shown as: 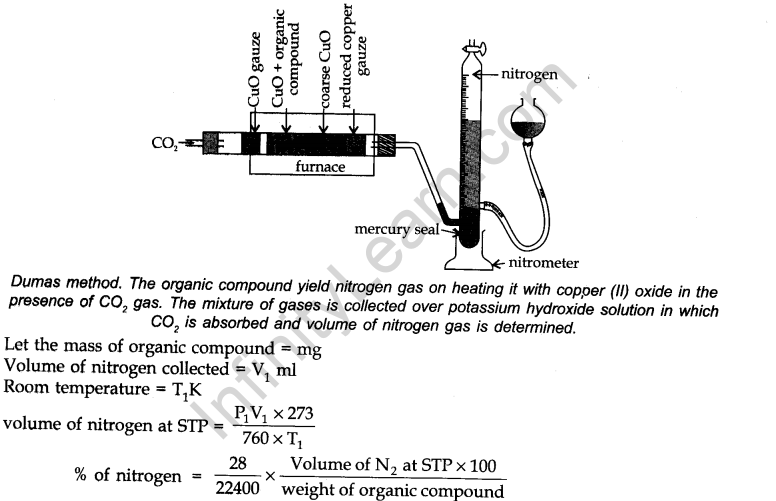 (ii) Kjeldahl’s Methods: Kjeldahl’s method is based on the fact that when an organic compound containing nitrogen is heated with con. H2S04 the nitrogen in it is converted to ammonium sulphate. The resultant liquid is then treated with excess of alkali and the liberated ammonia gas absorbed in excess of standard acid. The amount of ammonia is determined by finding the amount of acid neutralised by back filtration with some std. alkali. 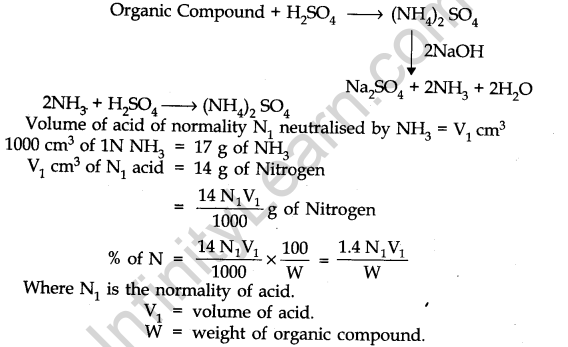 • All organic compounds contain carbon and hydrogen as essential constituents.
• In a homologous series two successive members differ in their molecular formula by -CH2 unit.
• Aliphatic Compounds are open chain compounds contain straight or branched chain of carbon atoms.
• Alicyclic Compounds: Compounds containing closed ring of carbon compounds.
• Aromatic Compounds: Benzene and its derivatives are called aromatic compounds.
• Functional group: A functional group is an atom or group of atoms bonded together in a unique fashion and which determines the physical and chemical properties of the compounds.
• Homolytic Bond Fission: It leads to the formation of free radicals. 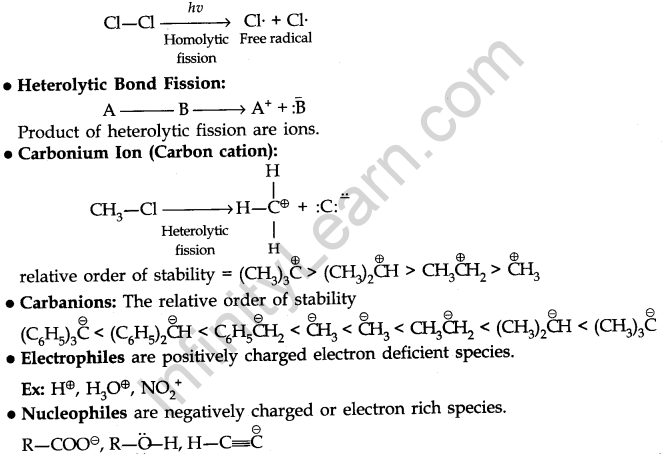