where, is work done in taking charge q0 from A to B against of electrostatic force.
Also, the line integral of electric field from initial position A to final position B along any path is termed as potential difference between two points in an electric field, i.e.

3. Electrostatic potential due to a point charge q at any point P lying at a distance r from it is given by

where, r is the position vector of point P w.r.t. the origin.
9. Electrostatic potential due to a thin charged spherical shell carrying charge q and radius R respectively, at any point P lying

10. Graphical representation of variation of electric potential due to a charged shell at a distance r from centre of shell is given as below: 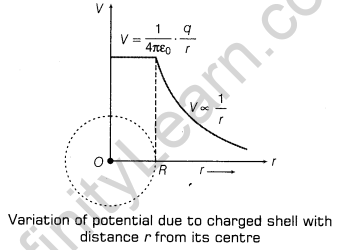 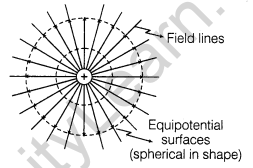 16. Electrostatic potential of a system of n point charges is given by

It happens due to the fact that no electric field exist inside a charged hollow conductor. Potential inside a shell is constant. In this way we can also conclude that the field inside the shell (hollow conductor) will be zero.