• There are several classes in a city. Elite, upper class, upper middle class, middle class, lower middle class, lower class and below poverty line.
• Although we do share common infrastructure (walk facilities, monuments).
• But there are differences, as people are recognised on the basis of acclaimed status e.g., Bollywood actors, actresses, directors etc. Only the actors reap the benefits and the stunt artists, dancer, etc are not noticed.
• Marketing, advertisements, trailers have really helped Bollywood.
• Different classes of people who eat at all different places, some eat at 5 star restaurants while some eat on the roadside.
• Major changes occurring in a city in urban areas can be attributed to science and technology.
• The professions that the women would choose were quite limited (teachers, nurses) but now there are many options but some fields are male dominated as fighter pilots.
• Because of science and technology a lot of disparities have been bridged.
• A lower class can became an upper caste by working hard.
• Even today society depends upon the people inhibiting the place, the area.
Images of Industrial Society
The social aspect of industrialisation:
1. Face to face interaction is limited compared to rural areas.
2. There is urbanisation whenever there are industries, cities come up.
3. With growth of industrialisation norms collapse criminal activities and corruption
— The person gets alienated from the society, no time to interact with family, it is extremely exhausting, monotonous and depressing.
Advantages
1. Better paid jobs are available and standard of living.
2. Caste distinction is not as much as in rural areas.
3. Freedom of thought expression, individualise.
Disadvantages
1. There is a distinction in terms of class, standard of life, lifestyle.
2. Class distinctions are quite high gap between the rich and poor and is increasing rapidly.
3. Increase in crime rate.
4. Alienation increases.
Industrialisation and Modernisation
• Industries came up, life changed drastically to use science and technology, modernisation is inevitable.
• Started thinking nationally.
• The modernisation theory grew different societies at different stages of modernisation but they are all working towards the broadness of a global view.
• This concept of modernisation came up in the west and that is why they are so highly developed.
Industrialisation in the society (India) 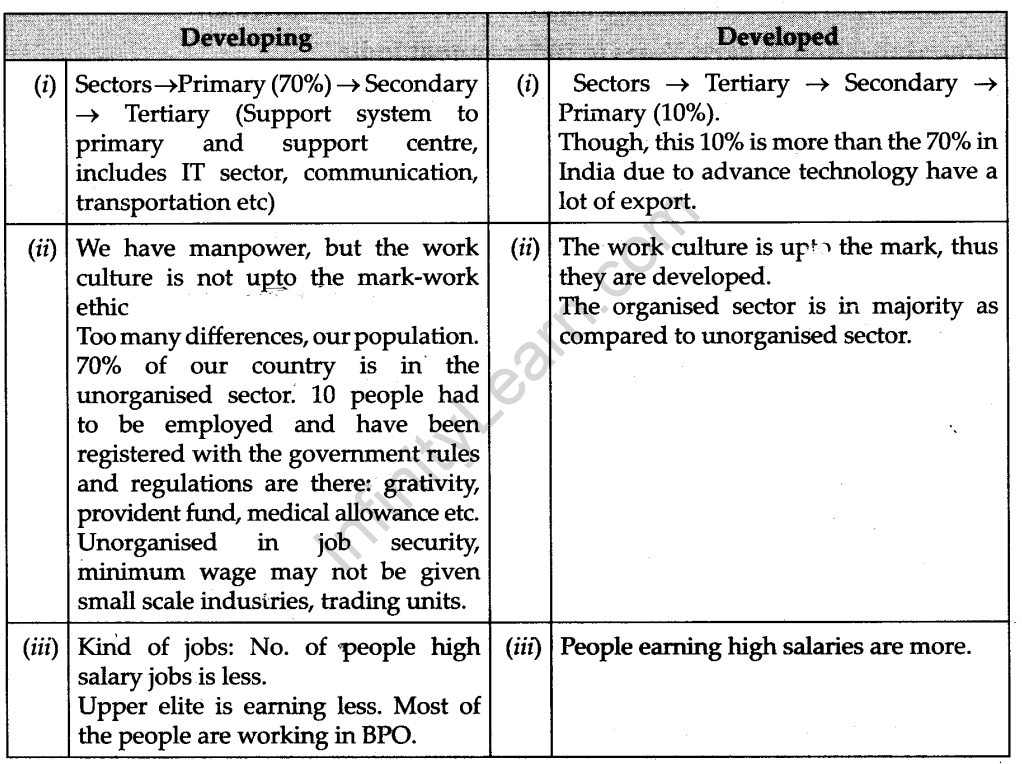 Words That Matter
1. Commercialisation: Commercialisation is the process of transforming something into a product, service or activity which has economic value and can be traded in the market.
2. Decentralisation: Decentralisation refers to a process of gradual devolution or change : of functions, resources and decision-making powers to the lower-level democratically
elected bodies.
3. Digitalisation: Digitalisation refers to the process whereby information is produced as a universal binary code, and can thus be easily processed, stored and circulated at faster speed across communication technologies like internet, satellite transmission, telephones, fiber optic lines etc.
4. Disinvestment: It includes privatisation of public sector or government companies.
5. Division of labour: Division of labour is specialisation of tasks in ways that many involve exclusion from some opportunities, therefore, closure of labour opportunities exist in employment or by gender.
6. Diversification: Diversification is the spread of investment into different kinds of economic activities in order to minimize risks.
7. Fordism: Fordism refer to a system of production made popular by the American industrialist, Henry Ford in the early part of the 20th century. Ford popularized the assembly line method of mass production of a standardized product (cars). This age also led to payment of better wages to the workers and social welfare policies being executed by both industrialists and the state.
8. Import-substitution development strategy: It has the import substitution substitutes externally produced goods and services, especially basic requirements such as food, water, energy. The notion of import substitution was popularized in the 1950s and 1960s to promote economic independence of development in developing countries.
9. Industrialization: Industrialization is the development of modem forms of industry – factories, machines and large-scale production processes. Industrialization has been one of the main sets of processes influencing the social world over the past two centuries.
10. Means of production: The means whereby the production of material goods is done in a society, including not just technology but the social relations between producers.
11. Micro-electronics: Micro-electronics is the branch of electronics dealing with the miniaturization of components and circuits. The major change in the field of micro¬electronics came in 1971 with the invention by an Intel engineer of the microprocessor that is a computer on a chip. In 1971, 2,300 transistors were packed on a chip of the size of a thumbtack, in 1993, there were 35 million transistors.