1. Meaning:
(a) ‘Mono’ means single and ‘poly’ means seller, i.e., single seller.
(b) Monopoly is a market situation where there is a single firm selling the commodity and there is no close substitute of the commodity sold by the monopolist.
2. Reasons of Monopoly:
(a) Grant of patent rights
(i) When a company introduces a new product or new technology it applies to the government to grant it patent certificate by which it gets exclusive rights to produce new product or use new technology.
(ii) Patent rights prevent others to produce the same product or use the same technology without obtaining license from the concerned company. Patent rights are granted by the government for a certain number of years.
(iii) For example, Patent certificate was granted to Xerox company for copying machines invented by it, thereby giving rights to monopoly.
(b) Licensing by Government
(i) A monopoly market emerges when government gives a firm license, i.e. exclusive legal rights to produce a given product or service in a particular area or region.
(ii) For example Previously Delhi Vidyut Board (Govt. Board) had the exclusive right to distribute electricity in Delhi. Now after privatization the same rights have been given to two private companies with exclusive areas to serve.
(c) Forming a Cartel
(i) A Cartel is a group of firms which jointly set output and prices so as to exercise monopoly power.
(ii) For example, In 1960, some oil producing companies formed a cartel, called OPEC (Organisation of Petroleum Exporting Countries).
3. Features of Monopoly:
(a) Single Seller
(i) There is only one seller or producer of a commodity in the market.
(ii) As a result, the monopoly firm has full control over the supply of the commodity.
(iii) The monopolist may be an individual, a firm, a group of firms or a government itself.
(iv) Naturally, a monopoly firm can exploit buyers by charging almost any price for its product because of exclusive control over the product.
(v) Monopoly firm itself is the price maker and not the price taker.
(b) Absence of close substitutes of product
(i) The product sold by the monopolist has no close substitute.
(ii) Though, some substitutes of the product may be available, yet they are not close substitutes in the sense that such substitutes are not identical products.
(c) Difficult entry of a new firm
(i) The monopolist controls the situation in such a way that it becomes very difficult for a new firm to enter the monopoly market and compete with the monopolist by producing the same product.
(ii) The monopolist tries his utmost to block entry of a new firm.
(d) Price Discrimination
Price discrimination refers to the practice of charging different prices from different buyers at the same time for the same product.
(e) Price Maker
(i) A monopoly firm has market power and is itself a price-maker. It can choose any price, it likes.
(ii) Unlike perfect competition where as output increases, price remains unchanged.
(iii) In monopoly as output increases or decreases, price changes according to what consumers are willing to pay along the demand curve. It produces and supplies a product to satisfy the entire market.
(iv) It is because a monopoly firm faces the entire demand of the market, that market demand curve is said to be a constraint facing a monopoly firm.
4. Shape of demand curve under monopoly:
(a) As we know in monopoly there is a single seller or firm, that is why like an industry, single seller constitutes the entire market for the product, which has no close substitutes.
(b) So, a monopolist has full freedom and power to fix price for the product. 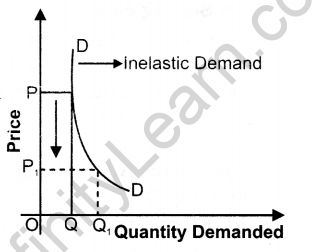 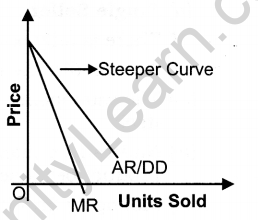 Monopolistic Competition
1. Meaning:
(a) It refers to a market situation in which there are many firms which sell closely related but differentiated products.
(b) Market for such products are toothpaste, soap, air conditioners etc.
(c) The market is called monopolistic competition since it contains both the competitive element and monopoly element.
2. Features of monopolistic competition
(a) A large number of firms:
(i) The number of firms selling similar product is fairly large, but not very large as in perfect competition.
(ii) As a result, firms are in a position to influence the price of their product due to their branji names.
(b) Product differentiation:
(i) In this type of market situation a producer can produce different products, but that products should be a close substitute to each other.
(ii) Product differentiation means differentiating the product on the basis of brand, colour, shape etc.
(iii) Due to product differentiation each firm under monopolistic competition is in a position to exercise some degree of monopoly (inspite of large number of sellers) because buyers are willing to pay different prices for the same product produced by different firms.
(iv) No doubt, producer has a control over a price, but he knows it very well to maximize the profit price has to be reduced. So, price falls under monopolistic competition due to product differentiation.
(c) Selling cost:
(i) It is the expenses which are incurred for promoting sales or inducing customers to buy a good of a particular brand.
(ii) This includes the cost of advertisement through newspaper, television and radio, and cost on each other sales promotional activities.
Note:
Persuasive Advertising: It refers to advertising so as to lure (attract) consumers avail
from one brand to another.
(d) Free entry and exit of firms:
(i) New firms can enter the market, if found profitable. Similarly, inefficient firms already operating in the market are free to quit the market if they incur losses.
(ii) It is because of this feature that like perfect competition, monopolistic competition also gives rise to normal profit.
(iii) No firm receives abnormal profit in the long run as then new firms can emerge and old ones can expand output and adjust supply with changing demand.
3. Shape of Demand Curve Under Monopolistic Competition
(a) The demand curve faced by a firm is negatively slope, (i.e. when price falls, demand rises) because the firm can sell more only by lowering the price of its product because of product differentiation. 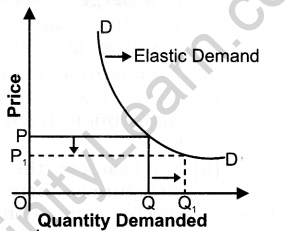 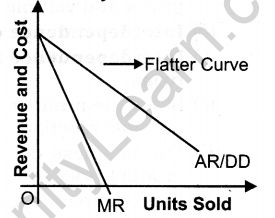 (b) No doubt, producer has a control over a price, but he knows it very well to maximize the profit, price has to be reduced. Price reduce means Average Revenue reduces and average revenue reduces marginal revenue but at a much faster rate. So, under monopolistic competition MR < AR.

1. Monopoly: It is a market situation where there is a single firm selling the commodity and there is no close substitute of the commodity sold by the monopolist.
2. Cartel: A Cartel is a group of firms which jointly set output and prices so as to exercise monopoly power.
3. Monopolistic competition: It refers to a market situation in which there are many firms which sell closely related but differentiated products.
4. Product differentiation: It means differentiating the product on the basis of brand, colour, shape etc.
5. Selling cost: It is the expenses which are incurred for promoting sales or inducing customers to buy a good of a particular brand.
6. Persuasive Advertising: It refers to advertising so as to lure consumers avail from
one brand to another.
7. Oligopoly: It is a market situation in which an industry has only a few firms (or few large firms producing most of its output) mutually dependent for taking decisions about price and output.
8. Pure or Perfect Oligopoly: In the case of pure oligopoly, firms produce homogenous products like copper, iron, steel and aluminium.
9. Imperfect or Differentiated Oligopoly: In differentiated oligopoly, firms produce differentiated products such as toilet soap, cigarettes or soft drinks.
10. Collusive Oligopoly: If the firms cooperate with each other in determining price or output or both, it is called collusive oligopoly or cooperative oligopoly.
(i) The MR and MC schedules
(ii) The quantities for which the MR and MC are equal
(iii) The equilibrium quantity of output and the equilibrium price of the commodity.
(iv) The total revenue, total cost and total profit in equilibrium.
11. Non-collusive Oligopoly: If firms in an oligopoly market compete with each other, it is called a non-collusive or non-cooperative oligopoly.
12. Price rigidity: It refers to a situation in which whether there is change in demand and supply the price tends to stay fixed.