Aesop’s fable The Ant and the Cricket is written in the form of poetry. The narrative of a desperate and stupid cricket and a miserly ant is told in this poem. During the summer and spring, the cricket would sing. He never kept food in the freezer for the winter. He finds that there is no food to eat at home for the winter months. He went to the ant because he was hungry. He asked the ant for some food and a place to stay. The ant declined to assist him and advised him to spend the winter dancing as well. The ant then tossed the cricket out of his house after stating this. 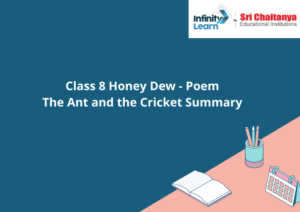 There was a cricket (a grasshopper-like insect) that was young and inexperienced. During pleasant occasions, he had the tendency to sing. During the spring and summer seasons, the bright sunny weather provided for lush green flora, and all living beings received ample food and water. During the winter months, however, the entire area was blanketed in snow. There were no flowers, leaves, or vegetation to be found. As a result, animals have a difficult time finding food during such times. The cricket that thrived throughout the active summer months was unable to save anything for the future. He opens the cupboard and finds it empty; he had not preserved any food. There was not a bit of food to be found. Winter had arrived, and it was only now that the insect realized he had forgotten to stockpile food. He was worried about his health because he was hungry.

The cricket had not saved any food for the future, and he was concerned about what would happen if he ran out. If he did not act now, he would starve to death. Because of the bitter cold, he was drenched and shivering. He collected confidence from his fear of going hungry and set out on a trek to see the ant and ask for his assistance. The cricket intended to borrow from the ant a place to remain for the winter and some grains to eat. He would repay the ant in future.

The ant is described as “miserly” by the poet. Misers are persons who save a lot of money and spend very little. It can take on a positive connotation here, praising the ant’s ability to plan and preserve food for colder days.

The cricket approached the ant and requested assistance. The ant introduced himself as the cricket’s servant and pal. However, the ant also stated that ants do not borrow or lend money. The ant went on to inquire about the cricket’s activities when the weather was warm enough for him to work hard and preserve food. When nature appeared good and bright, the cricket replied, he was quite glad. He went on to say that he sang all day and night because he was happy. The ant sarcastically remarked that if he had been singing during the summer, he might now dance until winter was over.

The poet is referring to the ant’s ridicule here. The ant criticized the cricket since the ant worked hard throughout the summer months in order to relax and eat during the winter months, whereas the cricket had sung songs all day during the summer and had now come to the ant for assistance. This also relates to the poet’s mockery of slackers. We should always consider our future demands and save accordingly. When we have money, we should not spend it all at once; instead, we should set aside some for rainy days.

Others may pity us and help us out of a bad situation if we have a genuine cause for not saving for the future; nevertheless, if we enjoy ourselves instead of working hard, no one will step forward to assist us. Summer and winter can also allude to our youth and old age; if we work hard and save properly during our youth, we can live contentedly in our old age without needing anyone’s help.

The ant turned down the cricket’s request for assistance. He hastily closed the slight gap in the door, effectively excluding the cricket from his home. The unfortunate cricket had no choice but to flee the scene.

People think of this narrative as a fable, but the poet believes it could have happened. The story’s moral is really realistic in that it can happen in real life as well. In the poem, he refers to people as two-legged crickets and the cricket as four-legged cricket. If we are as foolish as the cricket, we will starve and be disappointed as well. Always plan ahead and put money down for the future.

Ques: What prompted the cricket to take such a risk?

Answer: The cricket became courageous as a result of starvation and famine.

Ques: Why does the cricket visit the ant?

Answer: The cricket went to the ant for protection and food.

Ques: What did the cricket learn from the ant?

Answer: The ant explained to the cricket that they don’t borrow or lend money to anyone.

Ques: What was the ant’s question to the cricket?

Answer: The ant inquired of the cricket as to what he did throughout the summer.