Question 3.
Draw ray diagrams to represent the nature, position and relative size of the image formed by a convex lens for the object placed.
(a) at 2F1
(b) between F1 and the optical center O of the lens
Answer:
(a) When the object is at 2F1

(b) When the object is placed between the focus F1 and optical center O. 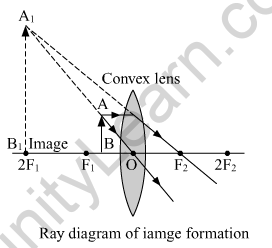 Question 5.
Write one function each of the following components of the transport system in human beings.
(a) Blood vessels
(b) Blood platelets
(c) Lymph
(d) Heart
Answer:
(a) Blood vessels help in transporting oxygenated and deoxygenated blood to different parts of the body.
(b) Platelets help in the process of blood clotting.
(c) Lymph carries digested and absorbed fats from the intestine. It also provides immunity to the body.
(d) Heart acts as a pump and helps circulate blood throughout the body.

Hydrogen gas can be identified by the pop sound produced during the reaction of metal with cold water.

Question 7.
(a) Why are covalent compounds generally poor conductors of electricity?
(b) Name the following compound.

(c) Name the gas evolved when ethanoic acid is added to sodium carbonate. How would you prove the presence of this gas?
Answer:
(a) As covalent bonds do not break easily (dissociate), so they do not form ions which help in conduction of electricity. Therefore, covalent compounds don’t conduct electricity as they don’t have free electrons or ions.
(b) The given compound contains 3 carbons and a ketone functional group so it would be called as ‘propanone’.
(c) When ethanoic acid reacts with sodium carbonate, sodium ethanoate, carbon dioxide, and water are formed.
\(2 \mathrm{CH}_{3} \mathrm{COOH}+\mathrm{Na}_{2} \mathrm{CO}_{3} \rightarrow \mathrm{CH}_{3} \mathrm{COONa}+\mathrm{CO}_{2}+\mathrm{H}_{2} \mathrm{O}\)
To test the presence of formed gas, we pass this gas from lime water. Upon reaction, lime water turns milky, which confirms the presence of carbon dioxide in the reaction.

Question 9.
In the electrolysis of acidified water.
(a) Name the gas collected at (i) anode, and (ii) cathode
(b) Why is the volume of gas collected at one electrode double than that at the other electrode?
(c) What would happen if dilute sulphuric acid is not added to water?
Answer:
(a) Electrolysis of acidified water.
At cathode: 2H+ + 2e– → H2
At anode: OH– → OH + e–
4OH → 2H2O2
Hence, the gas produced at cathode is hydrogen and the gas produced at anode is oxygen.

(b) A water molecule contains two atoms of hydrogen and one atom of oxygen. Therefore, during the electrolysis of water, the ratio of the amount of hydrogen gas and oxygen gas produced is 2.1. Hence, we can say that the volume of gas collected at one electrode is double than that at the other electrode 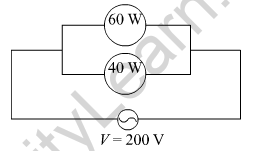 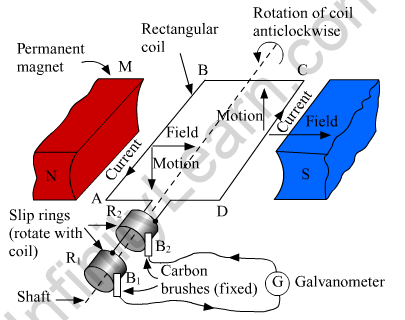 MNST → Rectangular coil
A and B → Brushes
C and D → Two slip rings
X → Axle, G → Galvanometer
The principle of working of an electric generator is that when a loop is moved in a magnetic field, an electric current is induced in the coil. It generates electricity by rotating a coil in a magnetic field. The above figure shows a simple AC generator.

Question 14.
How is ozone formed in the upper atmosphere? Why is damage to ozone layer a cause of concern to us? What causes this damage?
Answer:
Ultraviolet radiations split the oxygen molecules present in stratosphere into free oxygen atoms. These free oxygen atoms then combine with molecular oxygen to form ozone.
O2 → O + O
O2 + O → O3
Ozone layer is a protective layer which protects the earth from harmful UV radiations. Any damage to the ozone layer would result in UV rays entering the earth’s atmosphere. These UV rays can cause diseases such as skin cancer and cataract.
They can also adversely affect the crops.
The ozone layer is damaged as a result of chlorofluorocarbons. These are often used in refrigerators, air conditioners and fire extinguishers.

Question 15.
(a) State one difference between arteries and veins.
(b) Name any two sexually transmitted diseases. What advice is given to prevent them?
Answer:
(a)

(b) Syphilis and AIDS are two sexually transmitted diseases. Such diseases can be prevented by the use of condoms.
Condoms are made of thin rubber and are used to cover the penis and the vagina in males and females, respectively.

Question 16.
(a) What is meant by the dispersion of white light? Describe the formation of the rainbow in the sky with the help of a diagram.
(b)What is hypermetropia? Draw ray diagrams to show the image formation of an object by.
(i) Hypermetropic eye
(ii) Correction made with a suitable lens for the hypermetropic eye.
Answer:
(a) The splitting of white light into seven colors on passing through a transparent glass prism is called dispersion of white light.
A rainbow is formed in the sky because of the dispersion of sunlight by millions of water droplets in the atmosphere. Every single water droplet behaves like a tiny glass prism that splits the white light into different colors. Different colors bend at different angles on passing through the water droplets, thus separating the white light into a natural spectrum of seven colors, as Violet, Indigo, Blue, Green, Yellow, Orange, and Red. The diagram below shows the formation of a rainbow. 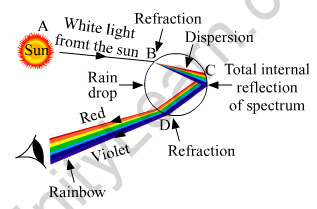 (b) Hypermetropia or long-sightedness is a common eye defect, in which a person is not able to nearby objects whereas the farther objects appear clear to the person.
(i) Hypermetropic eye.

(ii) Correction made with a convex lens for the hypermetropic eye.

Question 17.
(a) Give reasons for the following.
(i) Colour of the clear sky is blue.
(ii) The sun can be seen about two minutes before the actual sunrise.
(iii) We cannot see an object clearly if it is placed very close to the eyes.
(b) What is Presbyopia? Write two causes of this defect.
Answer:
(a) (i) The sky appears blue when viewed from Earth, because of the scattering of the light. When sunlight strikes molecules in our atmosphere, the light is redirected in many directions. The blue light is scattered more than the red light because blue color has the smallest wavelength i.e. comparable to the size of the particles present in our atmosphere. So, it is scattered the most, causing the sky to be blue.

(iii) If an object is placed very close to the eyes, the light reflected from it does not fall on the retina to form a clear image. The minimum distance for seeing an object clearly is 25 cm for the human eye.

(b) Presbyopia is a common defect of vision, which generally occurs at old age. A person suffering from this type of defect of vision cannot see the nearby objects clearly and distinctively. A presbyopic eye has its near point greater than 25 cm and it gradually increases as the eye becomes older.
Presbyopia is caused by the.
1. The weakening of the ciliary muscles.
2. Reduction in the flexibility of the eye lens.

Question 18.
(a) Why do we classify elements?
(b) What were the two criteria used by Mendeleev in creating his Periodic Table?
(c) Why did Mendeleev leave some gaps in his Periodic Table?
(d) In Mendeleev’s Periodic Table, why was there no mention of Noble gases such as Helium, Neon and Argon?
(e) Would you place the two isotopes of chlorine, Cl-35 and Cl-37 in different slots because of their different atomic masses or in the same slot because their chemical properties are the same? Justify your answer.
Answer:
(a) The need to classify elements into families with similar properties arose because, lacking this basic tool, the chemist had to deal with each of the 45 or so known elements one at a time, as if there were no rhyme or reason to them.

(c) As at the time of Mendeleev some elements are not discovered, so he realized this fact and left gaps in his table for such elements and also predicted their properties.

(c) Electricity can be conducted only in the presence of free electrons/ions. In the solid state, there will be no free electrons but in the molten state, ions are free to conduct electricity.

Question 20.
(a) Draw the structure of a neuron and label the following on it.
Nucleus, Dendrite, Cell body and Axon
(b) Name the part of neuron.
(i) where information is acquired.
(ii) through which information travels as an electrical impulse.
Answer:
(a)

Question 21.
(a) What is (i) phototropism, and (ii) geotropism? With labelled diagrams, describe an activity to show that light and gravity change the direction that plant parts grow in.
(b) Mention the role of each of the following plant hormones.
(i) Auxin
(ii) Abscisic acid
Answer:
(a) (i) The bending of shoots or other plant parts in response to light is known as phototropism.
(ii) The bending or growth of roots towards gravity is known as geotropism.
Activity –
Fill a conical flask with water and then cover the neck of the flask with a wire mesh. Place few germinating seeds on the wire mesh. Then, take a cardboard box that is open from one side. Place the flask in the box and keep this setup near a window. After 3-4 days, you will notice the shoots start bending towards light, while the roots bend away from light. 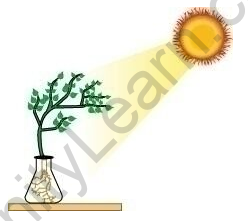 Question 24.
(a) Copy this figure in your answer-book and show the direction of the light ray after reflection.

(b) What type of mirror is shown in the above figure. a converging mirror or a diverging mirror?
Answer:
(a) The ray will get reflected from the mirror and will go parallel to the principal axis of the mirror. 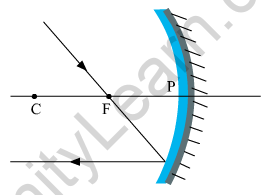 (b) The mirror shown in the given figure is a converging mirror or a concave mirror.

Question 25.
A student is performing an experiment to verify Ohm’s Law in the laboratory. The ammeter given to him for this purpose has 10 divisions between 0 and 0.5 A on its scale. If the pointer shows 22 divisions on the ammeter scale while taking a reading, what is the value of current according to this position of pointer?
Answer:
The given ammeter has 10 division between 0 and 0.5 A.
Value of one division on the ammeter scale = 0.05 A
If the pointer shows 22 division for the main scale reading, then the actual reading = 22 × 0.05 A = 1.1 A
Hence, the value of the current according to the given pointer is 1.1 A.

Question 26.
In the test tubes A and B shown below, yeast was kept in sugar solution. Which products of respiration would you expect in tubes A and B? 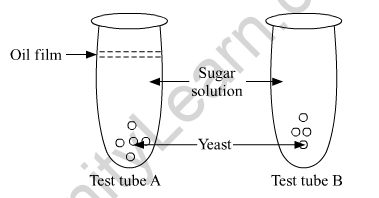