Get CBSE Sample Papers for Class 10 Social Science on Infinity Learn for free.

1. In which year did the Great Depression start ? 1
OR
Where were most of the large scale industries located in 1911 ?
OR
The very first section of the underground railways in the world was opened in which city?

2. Which is the oldest printed Japanese book ? 1
OR
Which country was the first where novel took firm root ?

4. By which name the rural local government is popularly known ? 1

5. Name any two elements that show the basic unity in India. 1

6. Which area of the world has the largest crude oil reserves ? 1

7. What do final goods and services mean ? [HOTSJ1

8. Write three activities which belong to the primary sector. [HOTSJ 1

9. Explain the three types of flows within international economy in exchanges.
OR
Describe the function performed by supply merchants in export trade.
OR
State any three characteristics of the ancient cities.

10. Highlight any three circumstances that led to the intermingling of the hearing culture and the reading culture. 3
OR
On which issue and what did Charles Dickens wrote in his novel ‘Hard Times’ ? Describe.

11. Distinguish between the renewable and non-renewable resources. 3

13. Distinguish between endangered species and vulnerable species of wild animals. Give one example of each. 3

14. Explain the working of underground tanks as a part of roof top rainwater harvesting system practised in Rajasthan. 3

15. After 1990, globalisation has caused difficulties to Indian farmers. How do you think the lot of farmers can be improved in India ? 3

17. Do you think that social divisions are always dangerous ? Explain. [Value-based question! 3

18. Explain the status of women’s representation in India’s legislative bodies. 3

19. Describe any three features of a developed country ? 3

20. State the criterion used by the World Bank as per World Development Report 2006, in classifying the countries. How did the World Bank define low and high income countries {based on this report) ? 3

21. “All the service sectors are not growing equally well in India.” Justify the statement with three arguments. [HOTS] 3

22. Describe in brief the economic conditions of the post-First World War period. 5
OR
Why was a jobber employed ? How did a jobber misuse his position and power ? Explain.
OR
Ties between members of households loosened in Britain in the era of industrialisation. Explain the statement.

23. What difference did printing technology make in the lives of women and children in the 19th century. Explain. 5
OR
“Novels were useful for both the colonial administrators and Indians in colonial India.” Support the statement with an example.

24. “From the late 19th century, issues of caste discrimination began to be written about in many printed tracts and essays. Support the statement by giving examples. 5
OR
The early novelists in India played a significant role in spreading social awareness. Justify the statement with examples.

25. “Forests play a key role in the ecological system.” Highlight the values of forest in our life. 5

26. “Local governments have made a significant impact on Indian democracy. At the same time there are many difficulties.” Explain. 5

27. Examine the standard of women’s representation in India’s legislative bodies. 5

28. How has the World Development Report classified the countries ? What are the limitations of this report ? 5 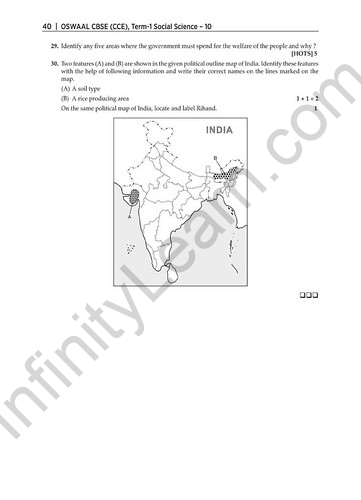