Extra Questions on Metals and nonmetals Class 10 science will help you to practice and revise CBSE Syllabus more efficiently. You will learn whether Calcium is metal or nonmetal. Chemical properties of metals and non metals, According to new CBSE Exam Pattern, MCQ Questions for Class 10 Science pdf Carries 20 Marks.

Topics and Subtopics in NCERT Solutions for Class 10 Science Chapter 3 Metals and Non-metals:

Question-7
By what chemical processes do you obtain the following metals?
i) Mercury from HgO ii) Iron from Fe2O3 iii) Manganese from MnO2 iv) Sodium form NaCl v) Aluminium from Al2O3. 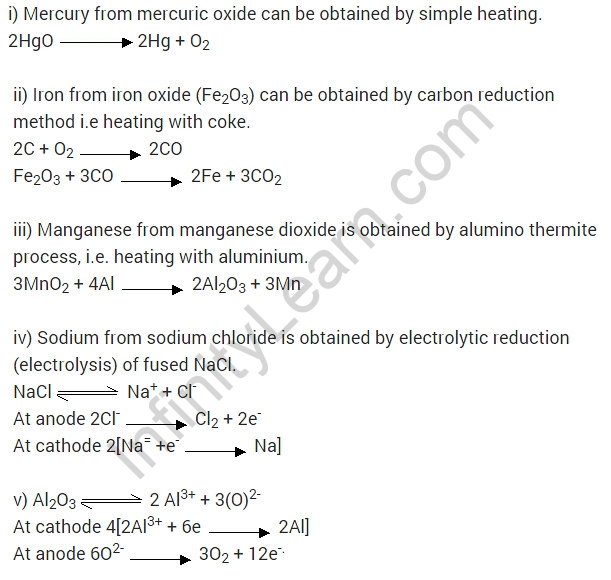 Question-8
i) What is the composition of molten slag, formed in the extraction of iron in the blast furnace?
ii) What is the use of slag?

Solution:
i) Molten slag in the extraction of iron is calcium silicate(CaSiO3).
ii) Slag is used for constructions of roads.

Question-10
Give reasons for the following
i. Na, K and Ca metals form hydrides by combination with hydrogen gas, but most other metals do not.
ii. Aluminium easily combines with oxygen but still it can be used for making kitchen utensils.
Solution:
i. Metals like Na, K and Ca can force the hydrogen atoms to accept electrons given by them and form hydrides.
ii. Aluminium forms a protective oxide layer when it combines with oxygen and hence it is used for making kitchen utensils.

Question-14
Select the non-metals amongst the following
i) Bismuth ii) Sulphur iii) Arsenic iv) Hydrogen.
Solution:
Hydrogen and Sulphur are the non-metals.

Question-16
Write chemical equations for reactions taking place when
i) Cinnabar is heated in air.
ii) Concentrated sulphuric acid and sulphur are heated together. Calcium metal reacts with water.
Solution:

Question-17
What are the uses of ammonia?
Solution:
i) Ammonia is used in the manufacture of fertilizers like ammonium sulphate and ammonium nitrate.
ii) To manufacture nitric acid by Ostwald’s process.
iii) To prepare dyes, explosives, cellulose acetate etc.

Question-18
Why do some metals like, Na, K, Ca, Mg not occur in nature as free elements?
Solution:
Metals like Na, K, etc (alkali metals) and Ca, Mg etc (alkaline earth metals) are very reactive and hence they react with atmospheric oxygen and carbon dioxide and also with other non-metals like sulphur present in the earth’s crust to form compounds like oxides, carbonates, sulphides, sulphates and chlorides. So they do not occur in free state, but are found in the form of the above compounds.

Question-19
Write chemical equations for reactions taking place when:
i) Manganese dioxide is heated with aluminium powder.
ii) Steam is passed over hot iron.
iii) A mixture of ammonia and oxygen is passed over platinum heated to 1073 K.
Solution:

Question-20
Why are metals like sodium, calcium, magnesium, aluminium etc. obtained by electrolytic reduction?
Solution:
Metals like Na, Ca, Mg, Al etc, which are high up in the activity series are electropositive elements and possess a high affinity for oxygen. So their oxides are very much stable and cannot be reduced with common reducing agents like carbon. So carbon reduction process cannot be applied to prepare these metals. They can only be prepared by electrolytic reduction of their fused chlorides or oxides.

Question-21
State briefly how you will extract iron from its ore. Draw a neat and labelled diagram. Write all the chemical reactions involved in it.
Solution:
Iron is usually extracted from its chief ore, Haemitite.
The various steps involved in the production of iron metal from haematite are as follows:
1. Concentration of ore
The concentration of haematite or is done by the method of hydraulic washing. The ore is spilt into small pieces and then washed in a stream of water to remove sand, clay. In this way ,a fairly concentrated ore is obtained and usually there is no need of any further concentration.
2. Calcination
The washed iron ore is then strongly heated in the absence of air to expel water sticking to it.
3. Reduction
The washed and dried ore is mixed with weighed quantities of coke and limestone and put into a blast furnace from the top .A blast of hot air is blown into the furnace from near its bottom. This air is to supply for the burning of coke.
The two reactions which take place in the blast furnace leading to the formation of iron metal are: formation of carbon monoxide and reduction of haematite. 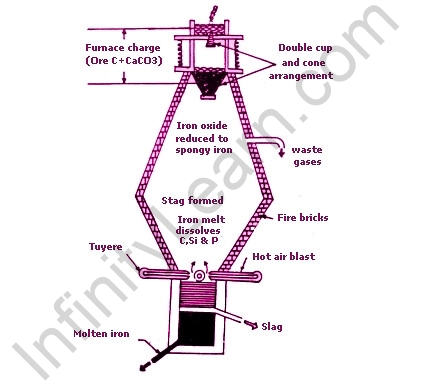 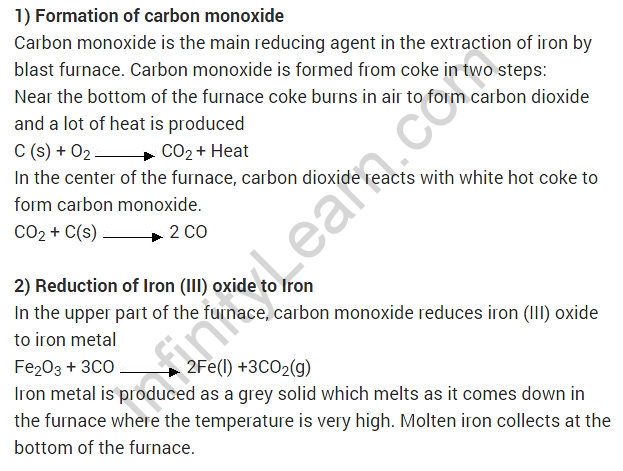 Question-23
In Frasch process of digging out sulphur from a deep underground, how has it made possible to life sulphur from the bed to surface of each? What is the basic principle on which extraction of sulphur is based? Draw a neat and labelled diagram. Besides elemental form, in what compound forms is sulphur found. Give two physical properties of sulphur.
Solution:
In the Frasch process in order to bring out sulphur from the underground deposits, a hole of about 30 cm diameter is bored up to the sulphur bed. It is based on the principle that sulphur has a comparatively low melting point of 1150 or 3880 due to which it can be melted by introducing super-heated water in the underground sulphur deposits. This mixture of molten sulphur and water is then brought out by the force of hot, compressed air.
Three concentric pipes A, B, C of different diameters are put down in the boring. 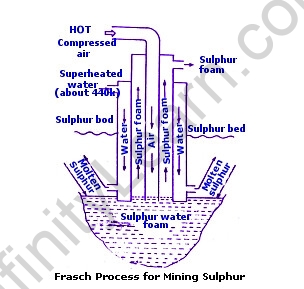 The three pipes are arranged one inside the other as shown in the above figure. Super-heated water under pressure is forced down through the outermost pipe A. The heat given out by hot water melts the underground sulphur. A jet of hot, compressed air is then sent down through the innermost pipe C. The force of compressed air brings the mixture of molten sulphur and water through the central pipe B. The sulphur water emulsion is kept in settling tanks when sulphur gets cooled and separates from water in the form of a yellow solid. The sulphur obtained by this method is 99.5% pure.

Question-25
Give reasons for the following
i. Silicon counts among metalloids
ii. Carbon is not used for making aluminium from aluminium oxide.
iii. For making hydrogen by reaction with hydrochloric acid, granulated zinc is preferred to a block of zinc.
Solution:
i. Silicon shows properties of both metals and non-metals and hence silicon counts among metalloids.
ii. Carbon has less affinity for oxygen than Aluminium and hence it cannot eliminate oxygen from Aluminium oxide.
iii. Zinc granules are preferred to a block of zinc because it offers a large surface area for the reaction with the acid.

Question-26
Explain
i) Why sugar chars (turns black) when conc. H2SO4 is added to it?
ii) What is the blue colour of crystalline copper sulphate due to?

ii) Blue colour of crystalline copper sulphate is due to five water molecules of hydration in CuSO4 5H2O.

Question-30
Write short notes on the bleaching action of sulphur dioxide.
Solution:
a) Sulphur dioxide bleaches the vegetable colours in the presence of moisture.
b) It bleaches the vegetable colours by reduction. It removes oxygen from coloured material.
c) Its bleaching action is temporary, because atmospheric oxygen again oxidises the bleached article back to its original colour.
d) SO2 is used to bleach delicate fabrics like wool, silk etc. 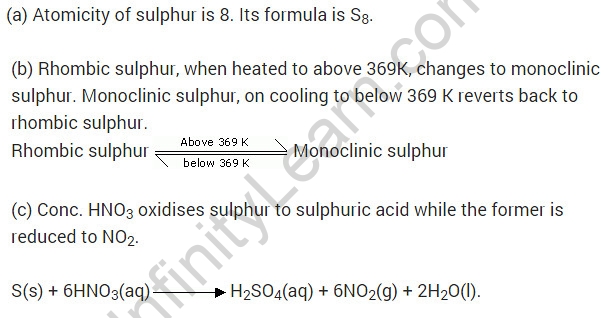 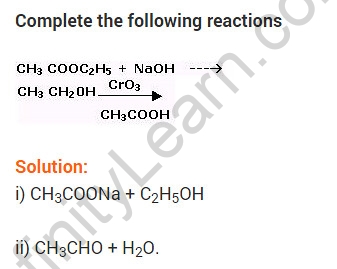 Question-35
Define the following terms
i) Mineral
ii) Ore
iii) gangue.
Solution:
i) The inorganic elements or compounds which occur naturally in the earth’s crust are known as minerals.
ii) The minerals from which a metal can be profitably extracted are called ores.
iii) The impurity of sand and rocky materials present in the ore is known as gangue.
Question-36
a) State why hydrogen is said to be a clean fuel?
b) What property of hydrogen is involved in being a good fuel?
c) What is hydrogenation of oils? Write one application.
Solution:
a) Hydrogen is a clean fuel because its reaction with oxygen produces only water. It does not form gases like CO2, NO2 etc, which pollute air.
b) Hydrogen, on combustion with oxygen, produces water and a lot of heat. This is an exothermic reaction.
c) Oils are unsaturated molecules, containing double bond. So hydrogen atoms are added at the double bonds of the molecules of oil. The reaction of hydrogen with oils is known as hydrogenation.
The hydrogenation reaction takes place at 473 K and in the presence of nickel catalyst.
Vanaspati or dalda ghee is prepared by hydrogenation of vegetable oils.
Question-37
What is the formula of Ammonia? Write the flow diagram for the manufacture of ammonia by Haber’s process. State any two of its physical properties. Write the equation for its reaction with HCl.
Solution:
The formula of Ammonia is NH3.
The flow diagram of the manufacture of ammonia by Haber’s process is given below:

Physical Properties
1. Ammonia is a colourless gas having a characteristic pungent smell.
2. Ammonia is highly soluble in water.
Question-38
How do metals react with hydrogen? Explain with an example.
Solution:
Only very few reactive metals like sodium, potassium, calcium and magnesium react with hydrogen to form metal hydrides. Example when hydrogen gas is passed overheated sodium, sodium hydride is formed.
Question-39
Name a metal which is stored in kerosene oil.
Solution:
Sodium is a metal which is stored in kerosene oil.
Question-40
Metals are electropositive in nature. Explain.
Solution:
Metals are electropositive in nature because they can form positive ions by the loss of electrons.
Question-41
Explain the displacement of hydrogen by a metal from an acid with an example. Give the equation to support the same.
Solution: