Question.1. Why was the Rowlatt Act imposed?
Answer. The imposing of the Rowlatt Act authorized the government to imprison any person without trial and conviction in a court of law.

Question.6. The currency notes on behalf of the Central Government are issued by whom?
Answer. Reserve Bank of India.

Question.8. In which year did the government decide to remove barriers on foreign trade and investment in India?
Answer. 1991

Question.12. How is energy an indispensable requirement of our modem life? Explain with three I examples.
Answer. Modem life is highly governed by technology and revolves around it. Modem technology is driven by energy and is highly automated. Every sector of National economy agriculture, industry, transport and commerce need greater inputs of energy. In the i domestic sector also, energy demands, in the form of electricity, are growing because of increasing use of electric gadgets and appliances. Energy? is the basic requirement for economic development.

Question.14. Outline the values that means of transport and communication help in developing among ; people of a nation.
Answer.

Question.17. Explain with examples why some laws that seek to ban something are not very successful in politics.
Answer. Law has an important role to play in political reform. Carefully devised changes in law can help to discourage wrong political practices and encourage good ones. But legal constitutional changes by themselves are not effective, until carried out by political activists, parties, movements and politically conscious citizens.
Any legal change must carefully look at what results it will have on politics. Sometimes it can be counter-productive. For example, many states have banned people who have more than two children from contesting panchayat elections. This has resulted in denial of democratic opportunity to many poor men and women.
The best laws are those which empower the people to carry out democratic reforms. The Right to Information Act is a good example that supplements the existing laws. “Any law for political reforms is a good solution but who will implement it and how” — is the question. It is not necessary that the legislators will pass legislations that go against the interests of the political parties and MPs.

Question.18. Explain the three conditions that determine MNCs setting up production in other countries.
Answer.

Question.20. Explain the role of government to make globalization fair.
Answer. The government can play a major role in making fair globalization possible:
Fair globalization would create opportunities for all, and also ensure that the benefits of globalization are shared better. Government policies must protect the interests not only of the rich and the powerful, but also of all the people in the country.

Or
Explain the views of Paul Bernard regarding the economy of Vietnam. 5
Answer. Paul Bernard was an influential writer and policy-maker who strongly believed that the purpose of acquiring colonies was to make profits.

Question.25. “Most destructive feature of democracy is that its examination never gets over.” Support the statement with appropriate arguments.
Answer. Suitable arguments:

(b) It is mandatory for the manufacturer to display certain details on the packing because consumers have the right to be informed about the particulars of goods and services they purchase. These details are about ingredients used, price, quantity, quality, potency, batch number, date of manufacture, expiry date and the address of the manufacturer.
The advantages of this rule are: 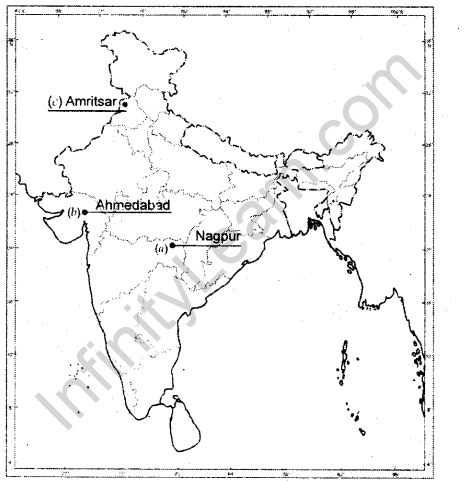 Question.30. On the given political outline map of India:
(a) Identify
A. Coal Mine
B. International airport
(b) Locate and label
(i) Mohali—Software Technology Park 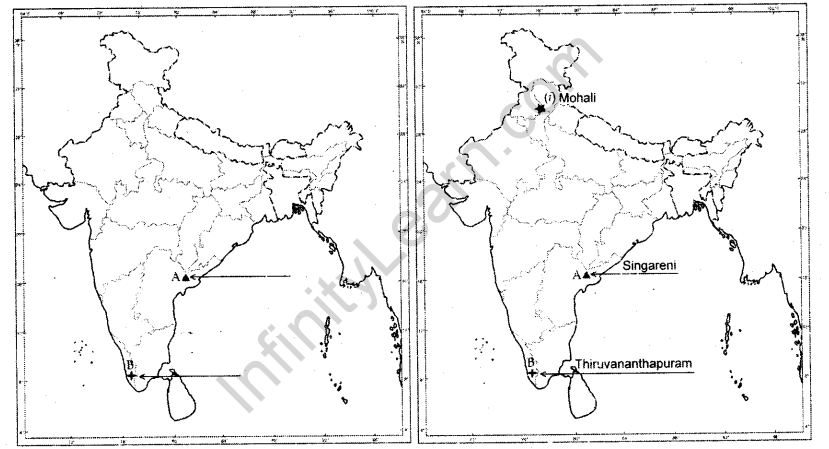 Question.16. Describe the movement for democracy in Nepal.
Answer. The Nepalese for democracy arose with the specific objective of reversing the kingCs order that led to suspension of democracy. The popular struggle in Nepal involved many organizations other than political parties like the SPA or the Nepalese Communist Party. All the major labour unions and their federations joined the movement. Many other organizations of the indigenous people, teachers, lawyers and human rights groups extended support to the movement.

Question.27. What is the meaning of SEZ? Mention any three features of SEZ.
Answer. SEZ or Special Economic Zones are industrial zones set up by the Central and State Governments with world class facilities in electricity, water, roads, transport, storage, recreational and educational facilities.
Three features of SEZ:

Question.11. Explain the contribution of Otto von Bismarck in German unification.
Answer. Contribution of Otto von Bismarck in German unification. Nationalist feelings started spreading amongst the middle class Germans, who in 1848, tried to unite different parts of German confederation into a nation state to have an elected parliamentarian government. However, this liberal movement was repressed by the combined forces of monarchy and military supported by Prussian landowners.
Prussian Chief Minister, Otto von Bismarck, took the responsibility of national unification with the help of Prussian army and bureaucracy. Under his leadership he fought three wars over seven years with Austria, Denmark and France. Prussia was victorious in all these wars and the process of unification of Germany was completed as a result of Prussia’s victory over France.
Or
Explain the reactions within the United States to its involvement in the Vietnam War during the 1960s.
Answer. The effect of United States being involved in the Vietnam War of 1960s was also felt within United States:

Question.12. Why is there a pressing need to use non-conventional sources of energy in India?
Explain any three reasons.
Answer.

Question.25. The movement in Nepal and the struggle in Bolivia have some elements relevant to the study of democracy. Explain these elements.
Answer. The movement in Nepal was to establish democracy, while the struggle in Bolivia involved claims on an elected democratic government. Despite the differences, both these struggles share some elements relevant to study of democracies.

Question.27. Give the meaning of WTO? What is the major aim of WTO? Mention any two shortcomings of WTO?
Answer. WTO (World Trade Organization). WTO believes that there should not be any barriers between trade of different countries. Trade between countries should be free.
Aims of WTO: