Question 1.
Define the following tenns :
(i) Line segment
(ii) Collinear points
(iii) Parallel lines
(iv) Intersecting lines
(v) Concurrent lines
(vi) Ray
(vii) Half-line.
Solution:
(i) A line segment is a part of a line which lies between two points on it and it is denoted as \(\overline { AB }\) or only by AB. It has two endpoints and is measurable.

(ii) Three or more points which lie on the same straight line, are called collinear points.
(iii) Two lines which do not intersect each other at any point are called parallel lines.
(iv) If two lines have one point in common, are called intersecting lines.
(v) If two or more lines which pass through a common point are called concurrent lines.
(vi) Ray : A part of a line which has one endpoint.
(vii) Half line : If A, B, C, be the points on a line l, such that A lies between B and C and we delete the point from line l, two parts of l that remain are each called a half-line.

Question 4.
Write the truth value (T/F) of each of the following statements:
(i) Two lines intersect in a point.
(ii) Two lines may intersect in two points.
(iii) A segment has no length.
(iv) Two distinct points always determine a line.
(v) Every ray has a finite length.
(vi) A ray has one endpoint only.
(vii) A segment has one endpoint only.
(viii) The ray AB is same as ray BA.
(ix) Only a single line may pass through a given point.
(x) Two lines are coincident if they have only one point in common.
Solution:
(i) False : As two lines do not intersect also any a point.
(ii) False : Two lines intersect at the most one point.
(iii) False : A line segment has definitely length.
(iv) True.
(v) False : Every ray has no definite length.
(vi) True.
(vii) False : A segment has two end point.
(viii)False : Rays AB and BA are two different rays.
(ix) False : Through a given point, infinitely many lines can pass.
(x) False : Two lines are coincident of each and every points coincide each other.

Question 5.
In the figure, name the following: 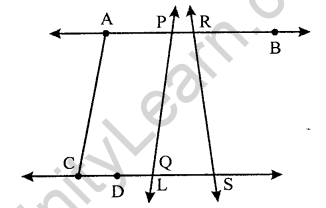