1.When was the Imperial Forest Research Institute set up in Dehradun?
Or
Name any two pastoral communities of the Himalayas which followed an annual pattern of cyclical movement.
Or
Mention any two factors responsible for the Dust Bowl tragedy.

3.Mention any two disadvantages of having political competition.

4.Name any two organs of the Government.

5.Mention any two rights which the Constitution of South Africa guarantees to its citizens.

7.Name the Act through which a poor person can get 100 days assured employment.

8.Name the two dimensions of hunger.

9.Explain the impact of the Dutch scientific forestry on the locals.
Or
How did the life of pastoralists change dramatically during the colonial period ? Explain.
Or
‘From the late 19th century, there was a dramatic expansion of wheat production in the USA’. Give reason for this expansion.

10.What were the factors which led to Dust Bowl tragedy of 1930’s ? Explain.
Or
Explain the impact of drought on the pastoralist communities of Africa.
Or
‘While people lost out in many ways after the forest department took control of the forests but some people benefitted from the new opportunities’. Explain.

11.When were the ‘Laws of Cricket’ drawn up ? What was stated in the first written laws of cricket ?
Or
Explain the major women movements against the dress norms. What was the impact of the movements on the society ?

12.How is the South-West Monsoon different from the North-East Monsoon ? Mention any three differences.

13.What are the major factors responsible for the threat to the nature ? Mention any three.

14.“Distribution of population in India is uneven”. Prove this statement with examples.

15. What do you mean by election ? Mention any two moral or social values which you learn from elections.

16.Why is there a need for political institution ? Mention any three reasons.

17.What are the main functions of the Election Commission of India ? Mention any three.

20.“There is a strong link between economic growth and poverty reduction.” Justify by giving three examples.

21.Mention any five factors which prompted the Samins to revolt against the Dutch.
Or
Explain the impact of droughts on the life of pastoralists.
Or
Why were Indian farmers reluctant to grow opium ? How did the British react to it ?

22.How did the technological advances change the entire game of cricket ? Explain.
Or
How did Industrial Revolution affect clothing in Europe ? Explain.

24.Describe the importance of biosphere reserves with respect to the wildlife conservation policy of India.

25.Explain the major powers and functions of the Parliament.

28.Question Based on OTBA.
Note:The student has to attempt any one map question from question numbers 29.1, 29.2 and 29.3. Question no. 30 is compulsory. The maps are attached with the question paper.

29.1 On the given political outline map of India, locate and mark:
(i)A state related to Monpa herders
(ii)A state where camel fair is organised annually.
(iii)The state related to Maldhari herders.
Or
(1) A state where the Gunda Dhur started the anti British movement.
(2)A state where Jagdalpur is located
(3)Area where Yerukula tribes belonged to
Or
29.3 (A) The place from where large amount of opium flowed out
(B)A region where opium was produced illegely
(C)A port through which opium was transported to China 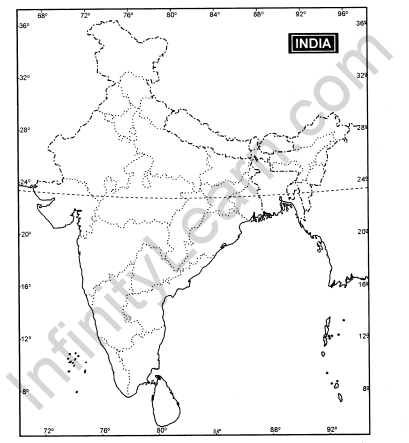 30.1 Two features – A and B are shown in the outline political map of India. Identify these features with the help of following information and write their correct names on the lines marked in the map.
A – Meteorological station in Meghalaya
B – A type of vegetation
30.2 Locate and label the following items on the same map of India with appropriate symbols.
Bird Sanctuary – Ranganathittu 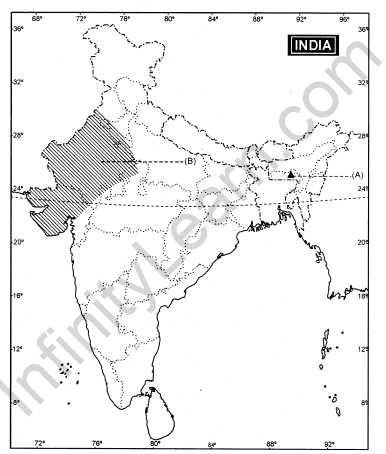