Gas laws have been around for some time, and gas laws greatly help scientists determine quantity, pressure, volume, and temperature when it comes to gas. The laws describing ideal gases were developed in the late 18th century when scientists began to realize that it was possible to obtain relationships between the pressure, volume, and temperature of a gas sample that would be approximate for all gases. If we consider the three basic laws of gas, Charles’ law, Avogadro’s law, and Boyle’s law, we can establish the relationship between pressure, volume, temperature, and the number of moles of a gas. 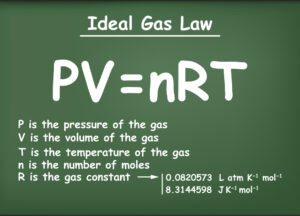 Boyle’s law i.e. (p = CV) is only used to predict the outcome of changes in volume and pressure, and only in the initial state of a fixed amount of gas. Boyle’s Law states that when temperature and mass are constant, the volume of a given amount of gas at a constant temperature is inversely proportional to the applied pressure.

The gas law, which relates volume and temperature to constant pressure and magnitude, is named after the English scientist Robert Boyle. Although many gas laws apply to ideal gases in closed systems at standard temperature and pressure (STP), their principles can nonetheless be useful in understanding and modifying a significant number of physical and chemical processes in the body and the mechanism of action of drugs. (For example, inhalation anaesthetics). The total pressure exerted on a vessel by several different gases is equal to the sum of the pressures exerted on the vessel by each gas, according to Dalton’s law of partial pressures. Because the gas must be in thermal equilibrium with its surroundings (or another source of heat) in order to maintain a constant temperature, this principle generally only applies to “slow” processes. Gas laws Formula Description Charles’ law V1 / T1 = V2 / T2 Constant P, temperature increases with volume.

What are the 3 laws of gas?

What are the 4 factors that affect the behaviour of gases?

The 4 factors are: pressure, volume, temperature, and the number of moles of a gas.