Step 1: Nitric acid accepts a proton from sulphuric acid before dissociating to form the nitronium ion.

Step 2: In the process, the nitronium ion acts as an electrophile, reacting with benzene to form the arenium ion.

Step 3: The arenium ion then loses its proton to Lewis base, resulting in the formation of nitrobenzene.

Sulfonation of benzene is the process of producing benzenesulfonic acid by heating benzene with fuming sulphuric acid (H2SO4 +SO3).
In nature, the reaction is reversible.

The mechanism of benzene sulfonation 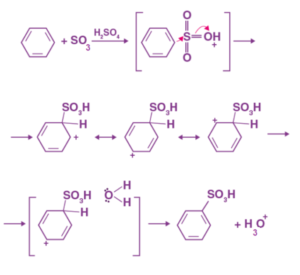 What exactly are alkylation and acylation?

Friedel-Crafts reactions are classified into two types: alkylation reactions and acylation reactions. The organic coupling reaction involving an electrophilic aromatic substitution that is used to attach substituents to aromatic rings is known as a Friedel-Crafts reaction. In 1877, French chemist Charles Friedel and American chemist James Crafts invented these reactions. While alkylation involves the substitution of an alkyl group for an aromatic proton, acylation involves the addition of an acyl group to an aromatic ring.

What exactly is nitrobenzene?

It is a nitro-compound that is oily, yellowish, and aromatic. It smells like almonds. When burned, it emits toxic nitrogen oxide fumes. Nitrobenzene is created through the benzene nitration reaction, in which benzene is treated with a mixture of concentrated nitric acid and concentrated sulfuric acid at a temperature of no more than 50°C. When one or more hydrogen atoms on the benzene ring are replaced by a nitro group, NO2, nitration occurs. Nitrobenzene is widely used in the production of aniline. It is also used in the production of engine and machine lubricants. It is also used in dyes, pesticides, drugs, and synthetic rubber.