Phosphine is a chemical that is classified as an organophosphorus compound. The structure of phosphine is trigonal pyramidal. Metal phosphides react with water or HCl to create phosphine. It’s a colourless gas that’s particularly toxic. The concentration of this chemical in the atmosphere fluctuates. It plays an essential role in the phosphorus biochemical cycle. In nature, phosphine may be found in human blood, urine, and saliva.

When aluminium, calcium, magnesium, or zinc phosphide pellets are exposed to water vapour, phosphine gas is formed. Aluminium phosphide is largely employed in the treatment of grain and tobacco warehouses. Its pellet composition lends itself to application in the treatment of shipping containers.

Phosphine, denoted by the formula PH3, is a phosphorus hydride. Phosphine is a dangerous, flammable gas. Because of its vital industrial applications, it is extensively manufactured in businesses and laboratories.

Phosphine is a chemical that is classified as an organophosphorus compound. Philippe Gengembre discovered this chemical for the first time in 1783. He made phosphine by heating phosphorous in an aqueous potassium carbonate solution. The concentration of this chemical in the atmosphere fluctuates. It plays an essential role in the phosphorus biochemical cycle. In nature, phosphine may be found in human blood, urine, and saliva.

Phosphine is found in extremely low and very variable amounts in the Earth’s atmosphere. It has the potential to make a large contribution to the global phosphorus biogeochemical cycle. 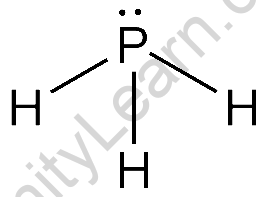 2. Pure phosphine is synthesized from phosphorous acid by the breakdown of H3PO3.

3. Heat white phosphorus in a concentrated NaOH solution in an inert CO2 atmosphere to create PH3.

Pure phosphine is a non-flammable liquid. It becomes flammable due to the presence of P2H4 or P4 vapours. By absorbing phosphine in HI and turning it to PH4l, phosphine is purified. When this is combined with potassium hydroxide, phosphine is formed.

Holme’s indication: Because phosphine spontaneously burns, it is a potential candidate for use in Holme’s signal. When a ship needs help, calcium carbide and calcium phosphide-filled containers are perforated and hurled into the ocean. As a result of the contact with water, acetylene and phosphine gases are generated. When these gases burn in the air, they send a signal.

The screen of smoke: When calcium phosphide is soaked in water, a significant amount of phosphine is produced, resulting in a smokescreen. During the war, this was used to hide troops from the enemy.

Chlorodiphenylphosphine abbreviated Ph2PCl is an organophosphorus chemical having the formula (C6H5)2PCl. It is a colourless oily liquid with a strong odour that has been characterized as garlic-like and is perceptible even at low concentrations (ppb). It is an effective reagent for introducing the Ph2P group into molecules, which includes a wide range of ligands. Ph2PCl, like other halophosphines, is reactive with various nucleophiles, including water, and is quickly oxidized even by air.

Chlorodiphenylphosphine, like other chlorophosphines, is utilized in the manufacture of phosphines.

Q. What are the characteristics of phosphine?

Q. Is phosphine a non-polar element?

ANS: No. Although phosphine is a polar element, it has non-polar molecular bonding. This is clear from the chemical formula PH3 (3 Hydrogen bonds with a lone pair of electrons).

Q. How is phosphine purified?

ANS: Phosphine is refined by absorbing impurities in HI, which produces PH4I, which is then treated with potassium hydroxide to produce phosphine.