The electron flow in a substance is obstructed by resistance. When a potential difference is applied along a conductor, it aids in electron movement, whereas resistance hinders electron movement. The pace at which the charge travels between two terminals is determined by a combination of these two elements. An electrical current is formed when a voltage is put across a substance. The current is directly proportional to the voltage placed across the material.

The Resistivity of Metals Resistance is the proportionality constant.

As a result, resistance is known as the ratio of the voltage applied to the current flowing through the substance. The unit of resistance is ohms (Ω).

The Resistance of Different Materials Conductors:

Materials that have a very low resistance to electron passage. Silver is an excellent electricity conductor, although it is not often employed in electrical systems due to its high cost. Aluminum is a good conductor and is commonly used as one because of its inexpensive cost and widespread availability.

They are materials with a reasonable resistance value (not too high or too low) at room temperature. Semiconductors are used in a variety of applications, including the creation of electron devices. Silicon and germanium are by far the most prevalent semiconductor materials.

Insulators are materials that have an extremely high resistance to electron flow. These materials are poor conductors of electricity and are primarily utilized in electric systems to prevent current leakage. Mica, porcelain, paper, dry wood, mineral oil, nitrogen gas, air, and other insulators are examples.

The reference temperature is T0.

α is the resistivity’s temperature coefficient

The graphs below show the link between resistivity and temperature. 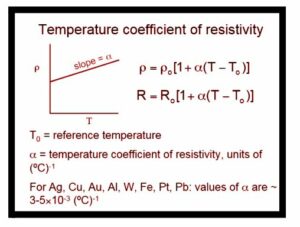 Significance of Temperature dependence of resistance

This article on temperature-dependent resistance gives you a lot of information about resistivity vs. temperature. Examine the thorough notes carefully to ensure that you comprehend this topic, as it will aid your preparation for the NEET exam. One could also list down some quick notes on resistivity’s temperature dependence to use as a reference during the exam.

The NEET themes are intended to answer and clarify the exam’s most frequently asked issues. With the help of notes from knowledgeable researchers in the subject, which is placed on the Infinity Learn online platform, they can be conveyed in simple words. If students have a thorough comprehension of the topics covered during the program, multiple-choice questions are simple to practice.

Question 1: What is the root of the opposition?

Answer: The resistance of a conductor denotes the conductor’s opposition to the charge flow through all of it. The two parts of an electric field are set when a potential difference is introduced across a conductor. The metal has a big number of electrons and an equivalent number of positive ions which do not move in the presence of free electron movement. This causes the liberated electrons to accelerate. The ions and atoms collide as the electrons pass, thus their motion is in opposition. Conductor resistance is the antagonism supplied by ions and atoms.

Question 2: What exactly is the distinction between a conductor and an insulator?

Answer: A conductor allows current to flow freely through it, whereas an insulator does not allow current to flow freely through it and will resist certain materials. Electric charges do not exist in the insulator, but they do exist on the conductors’ surfaces. Conductors are commonly utilized in the manufacture of electrical equipment. As a result, conductors are used in some of the important electrical equipment we use in our homes and daily lives.

Question 3: What are the main determinants of resistance?

Answer: The property of a material that hinders the flow of electrons is called resistance. Temperature, the length of the wire used, the area of the cross-section of the wire, which is inversely proportional, and the type of the material used are the four elements that affect resistance and determine the flow of power. The resistance is mostly unaffected by the conductor’s overall form. As a result, choosing the right material will aid in the proper resistance or conductivity.