English is an important subject of the Class 10 curriculum. Scoring good marks in the English language requires excellent knowledge of grammar and vocabulary. Students should be able to comprehend passages or poems and should be able to express their thoughts clearly and succinctly. The English Literature Reader for Class 10 is the perfect textbook for students to have a command over the language and for good vocabulary.

The textbook contains 6 chapters, 6 poems, and 2 dramas. Here is a brief summary of all: 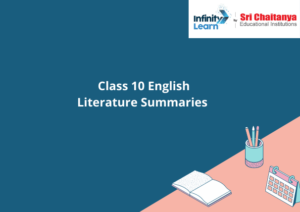 The first chapter is all about two brothers who try to prove that they are more mature than their age, in terms of gentlemanliness and humanism. The teenage boys act like adults.

The second chapter of the Class 10 Literature Reader is a great story about Mrs. Packletide, who wants to be better than her neighbor Loona Bimberton in terms of pride and courage.

The third chapter of the book is a story about human emotions. A father named Ali, who waited long for a letter from his beloved daughter, was mocked by everyone at the post office. But he holds on to his beliefs and gets a happy ending.

The fourth chapter of the book shows us how supernatural, ghostly elements can backfire. One should always be cautious in invoking powers over which they do not have any control.

The fifth chapter of the book literature reader is a story of a man who was very passionate about acting. The story depicts the experiences and struggles he went through in his life.

The sixth chapter is all about computers, video games, virtual reality, 3-D techniques, etc. This story revolves around Sebastian Shultz, in relation to video games, and is a very interesting read.

Poem 1 – Frog and the Nightingale

The first poem is very interesting as the protagonists are conversing throughout. The poem shows flow in the conversational tone itself between the Frog and the Nightingale.

The second poem of the Literature Reader textbooks has a personified mirror. Mirror further tells us about its appearance, qualities, and importance.

Poem 3 – Not Marble, Nor The Gilded Monuments

The third poem follows a specific structure and a strict rhyme scheme. The poem tells the reader about the grandeur and limitations of worldly glory.

In the fourth poem of the textbook, the narrator relates what a traveler tells him about something he saw in the desert.

Poem 5 – The Rime of the Ancient Mariner

The fifth poem is a story of sin, punishment, and redemption of an old sailor. It is told in the form of an engaging tale by the mariner himself to a stranger he meets.

The sixth poem gives a detailed description of the moments when the poet encounters a snake at his water trough.

The first drama of the book describes a tragic and unfortunate circumstance that has become extremely common in today’s world. Reducing the significance of moral values in the middle-class is a major theme of this play.