1.A carbon resistor is marked in a green, red and orange bands. What is the approximate resistance of the resistor?

2.The figure shows photoemissive characteristics of two photocathodes illuminated by the light emitted by a single source. Which photocathode has higher work function?

3.What is the cause of an electromagnetic wave?

4.Two circular loops, of radii r and 2r, have currents I and I/2 flowing through them in

clockwise and anti-clockwise sense, respectively. If their equivalent magnetic moments are and M2 respectively, then state the relation between and M2.

5.The wires of the same material having lengths in the ratio 1 : 2 and radii 2 : 3 are connected in series with a battery. What is the ratio of potential difference across them?

8.The energy gap of silicon is 1.14 eV Find the maximum wavelength at which silicon starts energy absorption.

9.In communication system the range is r, if the height of antenna is doubled, then what will be the increase in range?

10. What do you understand by “sharpness of resonance” in a series L-C-R circuit? Write expression for Q-factor of the circuit.

Show that the total induced charge simply depends upon the charge in magnetic flux and is independent of the time rate of change of flux.

12.A sample of paramagnetic salt contains 2.0 xlO24 atomic dipoles each of dipole moment 1.5 x 10~23 J/T. The sample is placed under a homogeneous magnetic field of 0.64 T and cooled to a temperature of 4.2 K. The degree of magnetic saturation achieved is equal to 15%. What is the total dipole moment of the sample for a magnetic field of 0.98 T and a temperature of 2.8 K? (Assume Curie’s law).

A Cassegrain telescope uses two mirrors as shown in figure below. Such a telescope is built with the mirrors 20 mm apart. If the radius of curvature of the large mirror is 220 mm and of the small mirror is 140 mm, then where will the final image of an object at infinity be?

19. What is space wave propagation? Which two communication methods make use of this mode of propagation? If the sum of the heights of transmitting and receiving antennas in line of sight of communication is fixed at h, show that the range is maximum when the two antenna have a height h/2 each.

22.In the Auger process, an atom makes a transition to a lower state without emitting a photon. The excess energy is transferred to an outer electron which may be ejected by the atom (this is called an Auger electron). Assuming the nucleus to be massive, calculate the kinetic energy of an n = 4 Auger electron emitted by chromium by absorbing the energy from a n = 2ton =1 transition.

23.One child found that a comb attracts the small pieces of paper after it get passed through hair. He wanted to know its reason that by what phenomenon it happens, but no one made him understand the same or did not answered satisfactorily. Next day he got ready for the school more early as he was eager to know the answer of the question which was disturbing him. As soon as he reached the school he asked the question from his teacher and got satisfied with the answer. He continued his day happily.

26. (i) The inputs, A and B shown here, are used as the inputs for three different gates, Gx, G2, and G3. The outputs, obtained in the three cases, have the forms shown. Identify the three gates and write their truth tables. 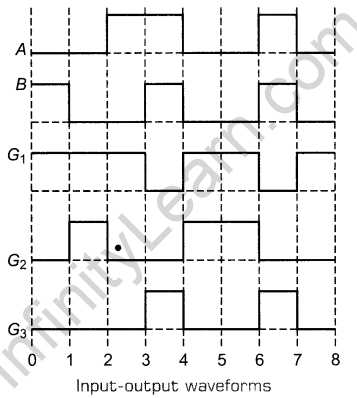 (ii) The inputs, A and B, shown here, are used as the inputs for three different gates, G1, G2 and G3. One by one. The outputs, obtained in the three cases, have the forms shown. Identify the three gates and write their symbols. 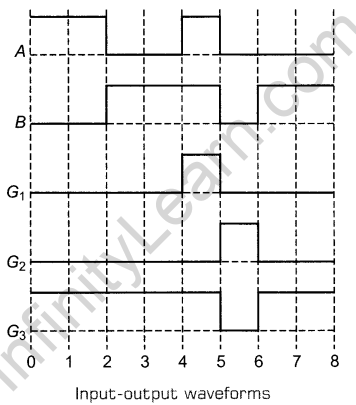 (i) The same input signal is applied to both the (input) terminals of a given logic gate. If the output is the

Identify the logic gates involved in each case.

(ii) Write the truth tables for each of the combinations shown below. Also, identify the logic operations performed by them. 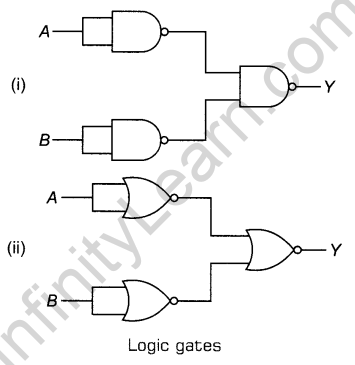