Flowering Plants: Plants which bear flowers are called flowering plants. Their bodies are divided into roots, stem, leaves and bear flowers and fruits.

Conduct: The water and minerals are transported to leaves and other parts of plant attached to the stem.

Petiole: The part of a leaf by which it is attached to the stem is called petiole. Lamina: The broad green part of leaf is called lamina.

Ovules: The small bead like structures inside the ovary are called ovules (see Fig.).

Climbers: Some plants with weak stem need support to go upright. These are called climbers.

Conduct: To carry a substance from one place to other is called to conduct. Creepers: Some plants with weak stem lie on the ground. These are called creepers. Fibrous roots: Roots in which many branches come out from the base of the stem are called fibrous roots.

Herbs: Plants with green and tender stem are called herbs.

Lamina: The broad green part of the leaf is called lamina.

Midrib: The thick vein in the middle of the leaf is called the midrib.

Ovule: Small bead like structures attached in the inner wall of the ovary are called ovules.

Petiole: The part of the leaf by which it is attached to the stem is called petiole.

Photosynthesis: A process by which green plants make their food from sunlight, carbon dioxide and water is called photosynthesis.

Pistil: Innermost part of a flower is called pistil. It is female reproductive part of the flower.

Sepal: Sepal protects the inner parts of flower when it is a bud.

Shrubs: Some plants have branches arising from the base of the stem to make bushy appearance. The stem is hard but not very thick. They are called shrubs.

Stamen: Stamens are the male reproductive parts of the flower.

Taproot: The root system in which a single root arises from the base of the stem, with secondary and tertiary branches is called a taproot system.

Transpiration: The loss of water in the form of vapours from the stomata on leaves is called transpiration.

Veins: Thread like structures in leaf are called veins.

Tap Root System:
In the tap root system (Fig. 8.1), a single root (called the primary root) comes out from the seed after germination. Tap roots are also called true roots. 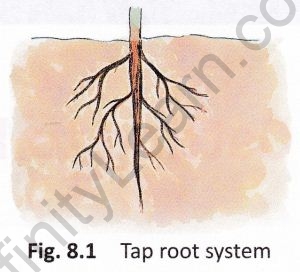 Fibrous Root System:
Fibrous roots (Fig. 8.2), which grow from the base of the stem have a bushy appearance. These roots are thin and almost equal in size. Grass, maize, wheat, onion, sugarcane, and rice are examples of plants with fibrous roots. 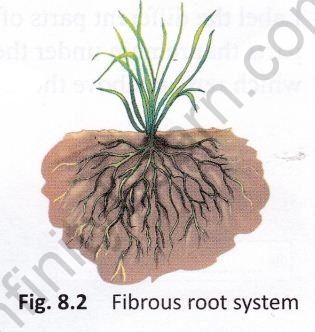 Desert plants have relatively longer roots because they penetrate deep into the soil in search of water.
Preventing soil erosion They help to bind the soil particles together, thereby preventing them from being carried away by water or wind.
Sometimes roots are modified to perform various other functions like reproduction, nutrition, etc.

Root Modifications:
Roots of some plants are modified to perform additional functions. Let us study some of these modifications and their functions (Fig. 8.3).

Shoot System:
All parts of a plant that are above the ground form the shoot system. It includes stem, leaf, flower, fruit, etc.

Stem:
The stem is a very important part of the plant.

Functions of a Stem:

Stem modifications:
Stems of certain plants are modified to perform special functions.
Some of the modifications and their functions are given below.
For storage of water Stems of plants like cactus and jade swell up to store water in them.
To manufacture food Stems of some plants become leaf-like and flattened like that of a cactus and perform photosynthesis. 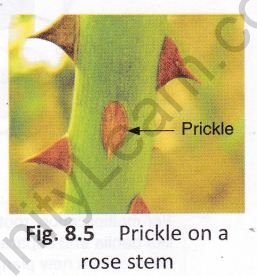 For protection Stems may be modified as thorns, like in bougainvillea or may be in the form of hard and sharp prickles, as in rose (Fig. 8.5), to protect the plant from being eaten by animals.
For support Stems of some climbers like grapes and passion flower are modified to form special structures called tendrils (Fig. 8.6). These help the climber plants like, which have weak stems, attach themselves to others for support. 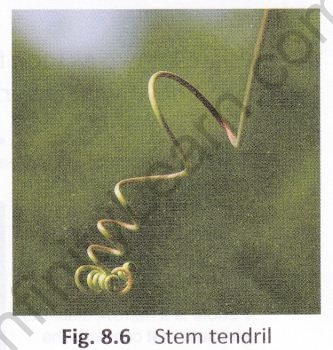 For storage of food Potato, onion, and ginger are modified stems that store food. There are three kinds of underground stems: tubers (e.g., potato), rhizomes (e.g., ginger), and bulbs (e.g., onion and garlic) (Fig. 8.7).
For multiplication of the plant Rhizomes, bulbs, and tubers also help in the multiplication of plant. Stem cuttings of some plants like rose, jasmine, and hibiscus grow into new plants.

Leaves:
Leaves are known as food factories of the plant. They arise from at the nodes of the stems and have a characteristic shape and size. Let us study its different parts (Fig. 8.8).

The arrangement of veins in a leaf is termed as venation. Venation is of two types: parallel and reticulate. If the veins run parallel to one another from the base to the tip of the leaf, the leaf is said to have parallel venation, e.g., banana and onion (Fig. 8.9). If the veins are arranged in a net-like pattern on both sides of the midrib the leaf is said to have reticulate venation, e.g., peepal and mango (Fig. 8.10).

Functions of a leaf:
A leaf performs various important functions for the plant.
It is usually green due to the presence of a green pigment called chlorophyll. A leaf prepares food for the plants. The process of making food by the plant using carbon dioxide, water, chlorophyll, and light is called photosynthesis.

Plants store food in the leaves, fruits, and stems in the form of starch.

Plants breathe with the help of their leaves. Leaves of most plants have tiny openings called stomata (singular: stoma) (Fig. 8.11) under their surface.
The exchange of gases takes place through the stomata (Fig. 8.12).

It helps in cooling the leaves, just as loss of water during sweating helps in keeping our bodies cool.

Leaf modifications:
Leaves of some plants are modified to form special structures called tendrils. Tendrils help plants to attach themselves to a support. Plants having tendrils are generally climbers.
For protection, leaves of certain plants get modified to form spines. Spines also reduce the amount of water lost from the plant.

Flowers, Fruits, and Seeds :
A flower is the reproductive organ of a plant. Figure 8.13 shows the parts of a flower. 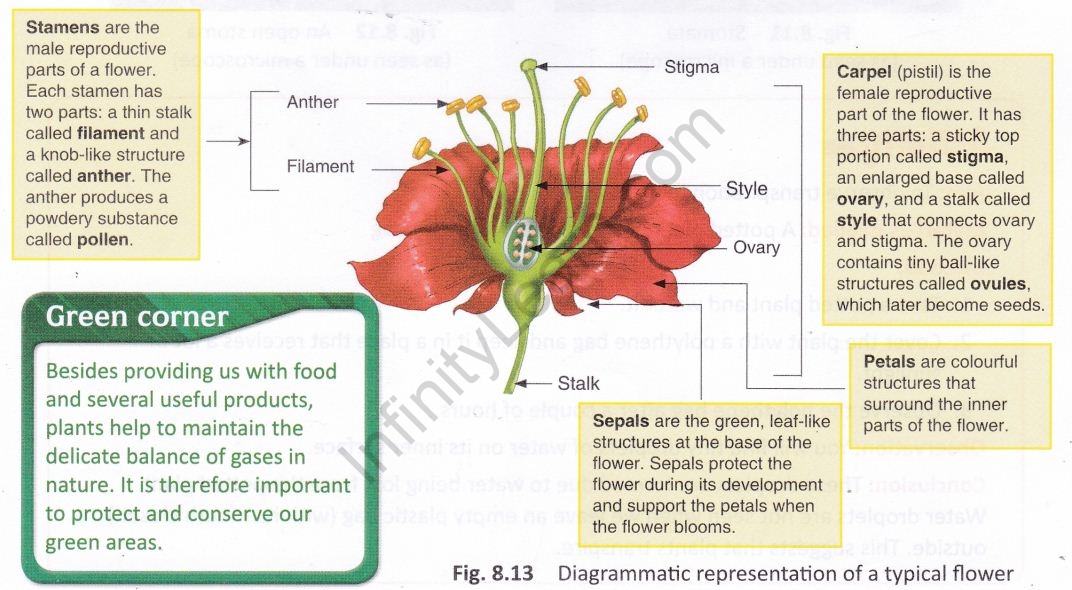 Pollination :
For a flower to develop into a fruit and form seeds, pollen grains must be transferred from its anthers to the stigma. 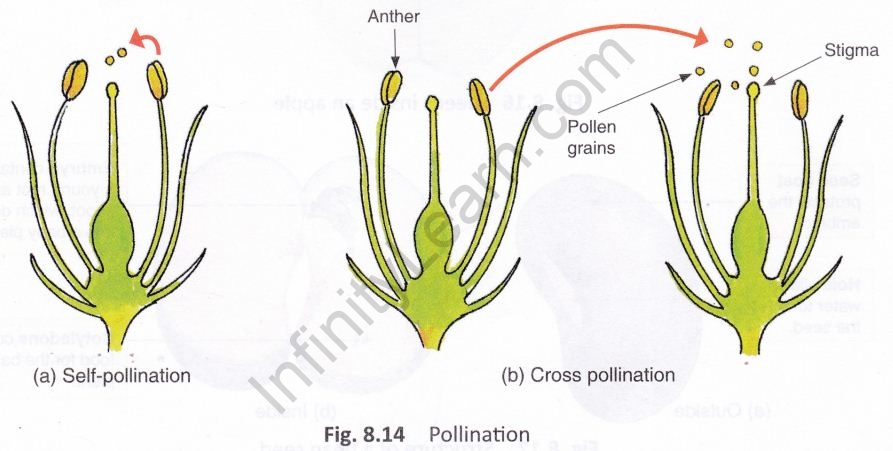 The transfer of pollen grains from an anther to a stigma is called pollination (Fig. 8.14).
Many flowers are brightly coloured and have a sweet smell to attract insects like bees (Fig. 8.15). When the insect sits on the flower, the pollen grains stick to its body and may get rubbed off when it sits on another flower. This helps in pollination. 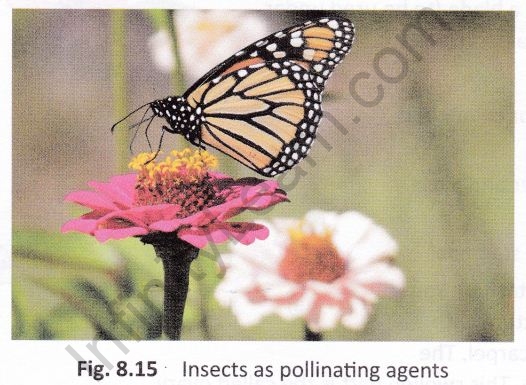 After pollination, the ovules change into seeds. As seeds (Fig. 8.16) form, the ovary develops into a fruit. Figure 8.17 shows the structure of a bean seed. Under suitable conditions, i.e., availability of sufficient water, air, and warmth, a seed becomes a baby plant. 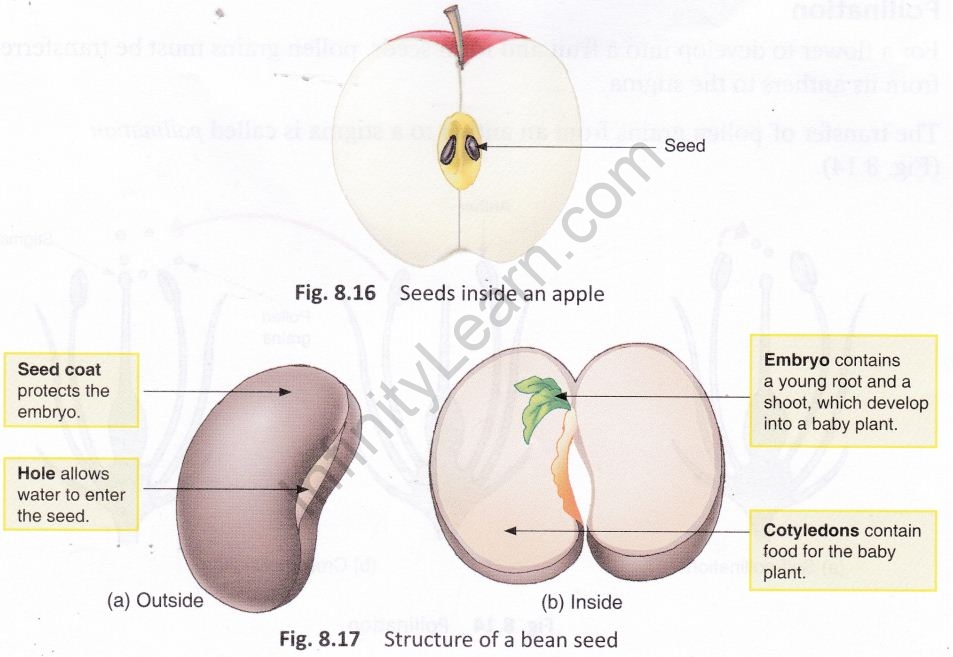 Node: Part of the stem from where the leaves arise is called a node.

Internode: The distance between two nodes is called the internode.

Venation: The arrangement of veins in a leaf is called venation.

Transpiration: The loss of water through the stomata is called transpiration.

Stamen: Male part of a flower is called the stamen.

Carpel: Female part of a flower is called carpel.

Pollination: Transfer of pollen grains from the anther to the stigma is called pollination.

Seed coat: The outer covering of a seed is called the seed coat.

The parts that remain under the ground (roots) form the root system.

The parts above the ground (stem, leaves, flowers, and fruits) form the shoot system.

Roots may be modified for support, storage of food, propagation, etc.

Stems may be modified for support, protection, photosynthesis, food storage, and reproduction.

Leaves are green because they have a green pigment called chlorophyll. Green leaves manufactureb their food with the help of carbon dioxide, water, and light.

Flower is the reproductive organ of a plant. Flowers have petals, sepals, stamens, and carpel.

The pollen grains need to be transferred to the stigma from the anther of the flower for pollination.

The seed has an embryo, which develops into a new plant under suitable conditions.