Silicon is thought to be a cosmic product of alpha-particle absorption by the nuclei of carbon-12, oxygen-16, and neon-20 at a temperature of about 109 K. The energy required to bind the particles that make up the nucleus of silicon is approximately 8.4 million electron volts (MeV) per nucleon (proton or neutron). Plain silicon is too reactive to be found in nature. Still, it can be found in almost all rocks as well as sand, clays, and soils, either as silica or as silicates with oxygen and other elements (e.g., aluminium, magnesium, calcium, sodium, potassium, or iron). The oxidised form, as silicon dioxide and especially silicates, is also found in the Earth’s crust and is an important component of the Earth’s mantle. Its compounds can also be found in all-natural waters, the atmosphere (as siliceous dust), many plants, and the skeletons, tissues, and bodily fluids of certain animals.

Plain silicon is a heavy, dark grey solid with a metallic luster and an octahedral crystalline structure similar to that of diamond, with which silicon shares many chemical and physical properties. Because of the lower bond energy in crystalline silicon, the element is lower melting, softer, and more chemically reactive than diamond. A brown, powdery, amorphous form of silicon with a microcrystalline structure has been described.

Since silicon forms chains similar to carbon chains, it has been investigated as a possible base element for silicon organisms. However, the limited number of silicon atoms that can catenate reduces the number and variety of silicon compounds when compared to those of carbon.

Silicon and its compounds can also be found in all-natural waters, the atmosphere (as siliceous dust), many plants, and the skeletons, tissues, and bodily fluids of certain animals. Students who want to flourish in chemistry need to be well known about silicon to get deep knowledge about it to do well on their exams. The important compounds of silicon with their uses and carbon compounds are provided here to assist students in effectively understanding the respective topic. Continue to visit our website for additional chemistry help.

Silicon and its Compounds

Silicon (Si) is a non-metallic chemical element that belongs to the carbon family (Group 14 [IVa] of the periodic table). Silicon constitutes 27.7 percent of the Earth’s crust; it is the second most abundant element in the crust, trailing only oxygen.

Elemental silicon is commercially produced by reducing silica with coke in an electric furnace and then refining the impure product. On a small scale, silicon can be extracted from the oxide via aluminium reduction. The reduction of silicon tetrachloride or trichlorosilane yields almost pure silicon. Single crystals are grown for use in electronic devices by slowly withdrawing seed crystals from molten silicon.

Carbon is available in the Earth’s atmosphere as carbon dioxide at a concentration of about 0.04 percent by volume, which is increasing. Carbon dioxide is a greenhouse gas that is found in all-natural bodies of water.

It is more easily absorbed and more tightly bound to haemoglobin in the blood than oxygen, making it a dangerous asphyxiant even in low concentrations.

Ethanol is also known as ethyl alcohol. In general, it is referred to as alcohol or spirit. It primarily consists of alcoholic beverages. Such an organic compound is used in the production of medicines such as tincture iodine, cough syrup, etc. However, pure ethanol should never be consumed because it can be fatal.

Ethanoic acid is also known as acetic acid. It has a melting point of 290 degrees Celsius. As this compound freezes in the winter, we call it glacial acetic acid. The vinegar we drink is an acetic acid solution in water that ranges from 5% to 8%. It can be used to keep pickles fresh.

Silicon Compounds and their Uses

Silica is nothing more than silicon dioxide (SiO2). It is typically found in crystalline forms such as quartz, cristobalite, and tridymite. When the appropriate temperature or pressure is applied, these forms can be interconverted.

Generally, quartz, cristobalite, and tridymite are crystalline forms of silica that are interconvertible at appropriate temperatures. Silicon dioxide is a three-dimensional covalent network solid in which each silicon atom is tetrahedrally covalently bonded to four oxygen atoms.

SiO2 has a very large structure. It has an extremely high bond enthalpy. As a result, it is unreactive to many acids, halogens, and alkalies. However, keep in mind that it dissolves easily in HF and NaOH. A drying agent is silica gel. It is used to support chromatographic materials as well as other catalysts.

This term refers to a class of organosilicon polymers that contain repeating units, and the primary products in the manufacture of silicones are alkyl or aryl substituted silicones. Silicones are resistant to oxidation and other chemicals and have high thermal stability. This compound is used as an electrical insulator as well as in surgeries.

It is chemically inert, which means they are not affected by oxidation, thermal decomposition, or organic reagents/chemicals. Silicones are naturally water repellent because they are surrounded by non-polar alkyl groups. It is used to make waterproof papers, wool, textiles, wood, and other materials by coating them with a thin layer of silicone. It’s used in sealants and as an electrical insulator.

Silicate has four oxygen atoms attached to one silicon atom. Glass and cement are the two most well-known man-made silicates.

Furthermore, some synthetic silicates have been developed like natural silicates.

Zeolites are used as a catalyst in the petrochemical industry. By using a zeolite called ZSM-5, it is easy to convert alcohol directly into gasoline. These zeolites can also be used to soften hard water. 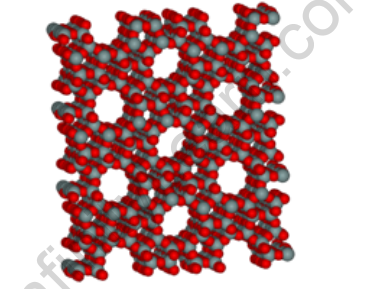 What is the most common silicon compound?

Silicon dioxide is perhaps the most abundant compound in the earth's crust and the most common compound of silicon.

What is the main component in silica?

Silica is made up of silicon and oxygen.

Is silicon an element or compound?

Silicon (Si) is a chemical element in the carbon family that is non-metallic.