Once conditions are normal, all gases behave similarly. Even minor changes in physical conditions, such as pressure, temperature, or volume, cause a deviation. In general, gas laws are used to study the behaviour of gases. The state variables of a gas, such as pressure, volume, and temperature, reveal its true nature. As a result, gas laws are the relationships that these variables have. Under normal conditions, all gases behave similarly. Changes in the physical parameters of the gas (such as temperature, pressure, and volume) cause changes in its behaviour. The gas laws, labeled after the scientists who discovered them, essentially describe how gases behave. The behaviour of gas particles deviates from their normal behaviour when the physical conditions of the environment change. Gas law, which consists of numerous laws, can be used to investigate these changes in gas behaviour. The gas laws have been around for a long time, and they greatly help scientists determine quantities, pressure, volume, and temperature when it comes to gas. Moreover, the gas law, as well as newer variants, are used in a wide range of practical gas applications.

Charles’s law is a gas law that is being tested. It explains why gases expand when heated. Charles, a French physicist, investigated the effect of temperature on the quantity of a gas at constant pressure. This law describes how a gas expands as its temperature rises; conversely, a drop in temperature causes a drop in volume.

Charles’s law clearly states that if the pressure remains constant, the volume occupied by a fixed amount of gas is directly proportional to its absolute temperature. This empirical relationship was proposed around 1787 by the French physicist J.-A.-C. Charles and later established empirically by the chemist Joseph-Louis Gay-Lussac. It is a subset of the general gas law and can be derived from gas kinetic theory under the assumption of a perfect (ideal) gas. Measurements show that the thermal expansion of real gases at constant pressure, at sufficiently low pressure and high temperature, closely follows Charles’s law. 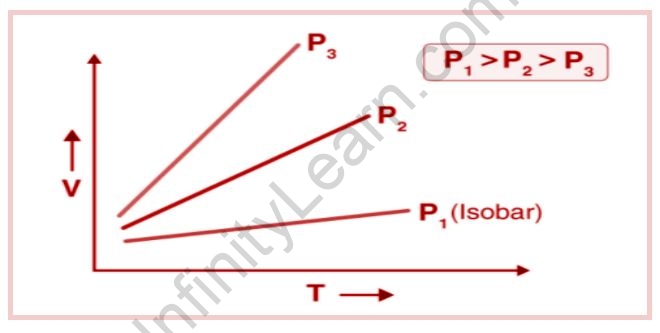 According to Charles’s law, the volume of an ideal gas at constant pressure is directly proportional to the absolute temperature. Based on this law, when the pressure on a sample of a dry gas is held constant, the Kelvin temperature and volume will be in direct proportion.

As per Charles’s law, the volume of a fixed amount of dry gas at constant pressure is directly proportional to absolute temperature. The statement can be represented in the following way.

Here, V and T are said to be directly proportional.

Now, equate them by using the constant k,

Here, the value of k depends on the pressure of the gas, the amount of the gas, and also the unit of the volume.

Now consider V1 and T1 as the initial volume and the temperature, respectively, of an ideal gas.

When we change the temperature of the gas to T2, its volume changes to V2.

When equating the equations 2 and 3, we get

By Charles’s law, as absolute temperature increases, the volume of the gas also goes up in proportion.

Only ideal gases are covered by Charles’s law. Only at high temperatures and low pressures does Charles’s law apply to real gases. At high pressures, the relationship between quantity and temperature is not linear.

Despite its simplicity, Charles’s law explains many everyday observations. In dough, yeast produces tiny bubbles of carbon dioxide gas. Baking the dough causes the bubbles to expand, resulting in lighter and fluffier pastries. When water is heated in a boiler, it produces large amounts of steam, which is used to power steam engines and keep classrooms warm. The gasoline-powered automobile engine burns fuel, generating enormous heat that expands the combustion gases, driving the pistons that turn the crankshaft and power the vehicle.

Every time someone cracks open a bottle or can of beer or soda, Charles’s law is demonstrated. The containers of these beverages contain pressurized carbon dioxide. Opening the top of a cold can or bottle of beverage results in very little gas expansion. When the same beverage is heated, carbon dioxide gas expands to a much greater extent. Some of the contents may be shot out of the can and onto the consumer as a result of this.

The modified law states that if a balloon is filled with gas and the temperature drops, the density will rise. If the balloon reaches a point where the density of the outside air is similar to that of the inside air, it will not rise any further.

What is Charles's Law?

Charles's law dictates that if the pressure remains constant, the volume occupied by a fixed amount of gas is precisely proportional to its absolute temperature. It is a subgroup of the general gas law that can be deduced from the kinetic theory of gases assuming an ideal (perfect) gas.

Is there anything that cannot be changed in Charles's Law?

Charles's Law provides a steady level of pressure. According to Charles's law, the volume of a gas is proportional to its temperature under constant pressure.

Why do ideal gases not have a volume?

Particles of ideal gas take up no space. Gas molecules take up the volume because they expand into a large region of space, but these molecules are approximated as point particles that cannot have any volume on their own.