The term stress refers to forces per unit area within materials caused by externally applied forces, uneven heating, or permanent deformation. The definition of stress permits accurate description and prediction of elasticity, plasticity, and fluid behaviour.

Stress can be calculated as follows:

The unit of stress is N/m 2

There are several types of stress in physics, but they are generally divided into three categories: Normal stress, Tangential stress or shearing stress, and Hydraulic stress.

A normal force is what occurs when a member is loaded by an axial force.In other words, when the force is applied perpendicularly to the body it is called normal stress.

When the length of the body changes due to normal stress applied, it is called longitudinal stress.

Volume stress refers to the change in volume of the body that occurs as a result of the stress.

Force per unit area is the definition of tensile stress. Due to the force, the length of the body increases when the stress is applied.

Changing the shape and volume of the body is caused by an application of tangential force. When the compression stress has been applied the length of the body is decreased

In physics, strain is the amount of deformation that occurs in a body as a result of a force applied, divided by the initial dimensions of the body.

According to the following equation, a solid’s deformation is proportional to its length:

Where Є is the strain due to stress applied, δl is the change in length and L is the original length of the material.

As the strain only describes the relative change in shape, it is dimensionless.

There are three types of strains: 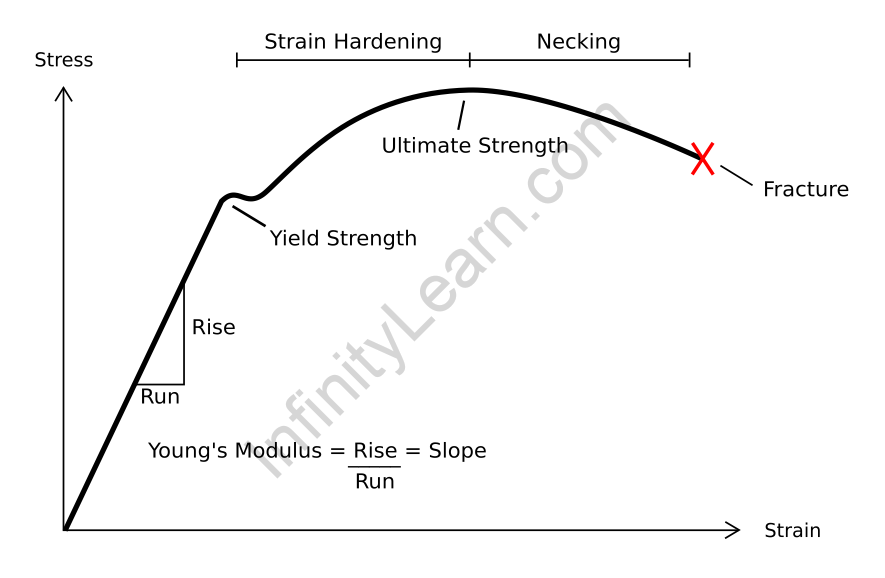 Stress-strain diagrams have the following regions:

(iv) Ultimate Stress Point: This point represents the maximum stress that the material can withstand before breaking.

Beyond this point, failure occurs.

(v) Fracture or Breaking Point: At this point in the stress-strain curve, the material fails.

What causes bones to fracture?

Tension or compression do not cause bones to shatter. In fact, they are typically broken by bending or sideways stress, resulting in snapping or shearing of the bone. The behaviour of bones in tension and compression has an enormous impact on how much weight they can support. Structural components that bear weight, such as columns in buildings and trees, are considered bones.

Building columns contain steel-reinforcing rods, and fibrous trees and bones are examples of weight-bearing structures. A different bone serves a different purpose in the body and is subject to different forces depending on its location. Therefore, the top of the femur’s bone is made up of thin sheets separated by marrow, though the bones in other places may be cylindrical and filled with marrow or solid.

Also read: Here’s How to Boost Your Percentage in the Board

Question 1:What does the stress-strain curve show?

Answer: A stress-strain curve is a graphical representation of how a material will react when loaded. It shows a comparison between stress and strain experienced by the object.

Question 2:What is the relation between stress and strain?

Answer: Up to a certain elastic limit, strain and stress are proportional. Hooke’s law explains this relationship. According to Hooke’s law, the strain in a solid is proportional to the applied stress.

Question 3: What is the ratio between stress and strain?

Answer: When the force is applied to the body, its resistance to being deformed elastically, which means not permanently, is calculated by the ratio of stress to the strain. This ratio is called elastic modulus or modulus of elasticity.

Question 4: Is pressure the same as stress?

Answer: The difference between stress and pressure is the fact that with pressure the force is external, while in stress the force is internal, so it cannot change its shape or size.