Elephants are massive animals. They stand on 4 huge, pillar-like legs. They have two ears that resemble large fans. Elephants have a unique body feature called the trunk. Also, they have a short tail. The male elephant has two tusks, which are very long teeth.

What do Elephant Eat?

Elephants are herbivores who eat leaves, plants, grains, fruits, and other plant-based foods. They may be found mostly in Africa and Asia. The majority of elephants are grey in colour, although Thailand has white elephants. Elephants are also one of the world’s most long-lived mammals, with an average lifespan of roughly 50-70 years. The world’s oldest elephant had passed away at the age of 86. 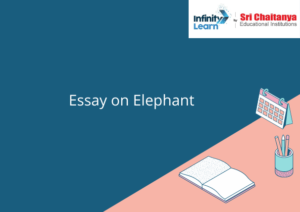 Elephants are thought to be among the most intelligent animals on the planet. They are highly obedient. Female elephants like to dwell in groups, whereas male elephants prefer to live alone. This wild animal also has a high learning ability. They are used by humans for transportation and entertainment. Elephants are extremely valuable to both the planet and mankind. As a result, we must safeguard them in order to avoid disrupting nature’s cycle.

Elephants utilize their long trunks to collect food and drink, and to bathe, and make low and high-frequency noises for warnings, signals, and calls for help, among other things.

Elephants have the unique capacity to produce a very low-frequency sound that is undetectable to humans. These sound waves may be heard by other elephants across long distances.

Elephants are among the most intelligent animals on the planet. They are capable of showing a wide range of emotions. People in Africa who share the landscape with these creatures have earned their respect. As a result, they have a great cultural significance to them. Elephants attract tourists from all around the world. Additionally, they play an important role in preserving the biodiversity of the ecosystems.

Most essentially, elephants are important to the environment. During the dry season, they use their tusks to dig for water. It helps in their survival in dry environments and droughts, as well as the survival of other animals. Also notable is that when they eat, forest elephants create holes in the vegetation. The holes that have been formed allow for the development of new plants and new paths for smaller animals. This strategy also helps seed dispersal by trees.

Elephant dung, too, has health benefits. They leave behind seeds from the plants they’ve eaten in their feces. As a result, new grasses, shrubs, and even trees are more likely to grow. As a result, they improve the savannah ecosystem’s health.

Elephants have been added to the endangered species list. This threat is the result of selfish human behavior. The illegal killing of elephants is one of the main causes of their endangerment. Humans kill them for their skin, bones, tusks, and other body parts because they are very profitable.

Further, humans are destroying elephants’ natural habitat, namely forests. As a result, there is a scarcity of food, living space, and survival resources. Similarly, elephants die as a result of hunting and poaching for the thrill of it.

As a result, we can observe how people are the primary cause of their extinction. To put it another way, we need to raise public awareness about the value of elephants. To conserve them, extensive conservation measures are required. Poachers must also be arrested in order to prevent the extinction of endangered animals.

Elephants are empathetic. There are several studies and examples of elephants displaying empathy and care for other elephants and people when it is required. Elephants are aware of various emotions and may detect when another member of their herd is in distress. Elephants, unlike most other animals, mourn their dead. They’ve been known to stand by the corpse for hours, and even bury their loved ones.

To conclude, there is recent research that shows mind-blowing capabilities in elephants. A captive elephant named “Koshik” in Korea has learned to imitate Korean words such as “hello”, “lie down”, and “sit down”. Researchers were astonished by this revelation, which they believed was due to the elephant’s upbringing with people and his method of interacting with them.

However, it is really concerning that elephants are in danger, and their numbers have fallen in the previous century as a result of the illegal ivory trade. Elephant tusks are used to make ivory, which has a profitable market, thus poachers and hunters are continuously on the lookout for elephants to sell their tusks on the black market. Knowing how majestic these creatures are, it is our responsibility to spread awareness about this and to ensure that the remaining elephants can peacefully coexist with humans.