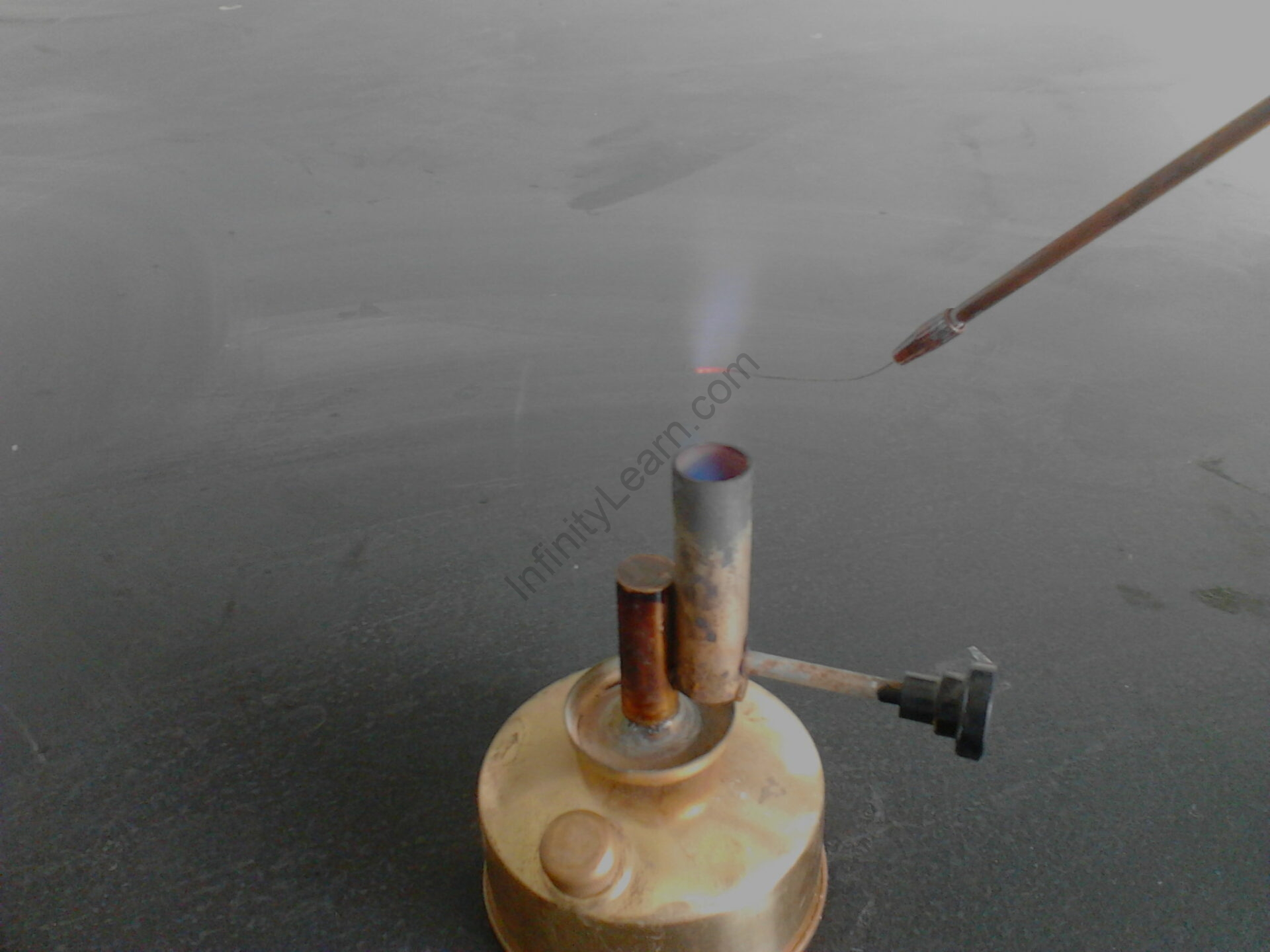 When the salt containing the metal ion is burned, the colour of the flames gives away this difference. It’s worth noting that atoms, not ions, make up the emission spectrum of each element that determines the flame colour. The visible colour lines seen in flame tests are caused by the transition of electrons in the ions.

What Is The Flame Test, And How Does It Work?

A flame test is a qualitative examination used by chemists to determine whether metal and metalloid ions are present in a material. When heated on a gas burner, not all metal ions produce colour. The simplest method of determining the presence of group 1 metal ions in a chemical is to use a flame test. There are many dependable techniques for other metals, but a flame test will give you a better idea of where to look.

Various safety precautions must be taken to conduct a flame test in the laboratory.

A flame test is a qualitative method for detecting metal ions based on the colour of the flame created.
Metal ions gain energy and change from a lower to a higher energy level when the sample is heated. Ions are unstable at high energies; when they release their energy, they fall to the ground. The energy is released in the form of light, which varies depending on the metal ion. As a result, when a metal ion is heated, it distinctively changes colour.

Details on how to conduct a flame test with platinum or nickel-chromium alloy (nichrome) wire.

How do you do a flame test?

After learning what a flame test is, what should you do? You’re probably wondering how to conduct a flame test. Let’s have a look at how flame testing is conducted.

The flame test can be done in one of two ways. These are the following:

You’ll need a clean wire loop for this. Platinum or nickel-chromium loops can be used. Always clean these loops by soaking them in hydrochloric or nitric acid. Rinse with distilled water after that. Also, test the loop’s cleanliness by putting it in a gas flame. Remember that if the desired colours aren’t created, it signifies the loops haven’t been well cleansed. Before the test, the loop must be cleansed.

The clean loop is dipped in a powdered or liquid metallic salt solution. Place the loop containing the sample in the blue section of the flame. After that, take note of the colour you’ve noticed.

Colour of the flame test

The majority of metals create green colours, with varying tints of red and blue being visible. When using the fuel in a laboratory, the most practical way to see metal ions is to compare it to a set of standards (known as composition) to establish what colour to expect.

The flame test is unremarkable because it incorporates numerous variables. In most cases, there is just one technique available to observe the elements present in a compound. When performing a flame test, be wary of any sodium contamination of the fuel or loop, as sodium has a strong yellow hue that covers other colours. Sodium contamination can be found in a variety of fuels. With the help of the blue filter, you can see the flame test colour and remove any yellow hue.

What are the flame test's limitations?

The flame test does not identify the ions if the ion concentration is very low. 2. The intensity of the light fluctuates from one sample to the next. Consider the amount of sodium and lithium in the same container.

Which metals are the simplest to detect using the flame test?

The Group 1 elements are the simplest metals to identify using the flame test. The flame test does not identify other metals, although it does provide a basic notion of the likely compound.

Why is it that the flame test is unable to identify ions?

If ions are present at low concentrations, the test fails to identify them. The intensity of the coloured flame differs from one sample to the next. Lithium's red emission, for example, is less brilliant than sodium's yellow emission for the same amount of sodium. Some elements, such as Be and Mg, are incapable of passing the flame test.