Electrical flow is the flow of charged particles, such as electrons or particles, moving along an electrical conveyor or space. It is estimated as the net rate of charge flow through a surface or into a controlled volume. A moving particle is called a charge carrier, and it can be one of several types of particles that depend on a conductor.

In electrical circuits, charge carriers are electrons that normally move through wires. In semiconductors, these can be electrons or holes. The charge transporters are treated particles in an electrolyte, but in plasma, an ionized gas, they are particles and electrons. A potentiometer is a variable resistor with three leads.

A resistor, a bundle of resistors, is one of the commonly used components in electrical circuits. Resistors often used to regulate current by adding or subtracting resistors in circuits come in many shapes and sizes. In addition to classification according to these two characteristics of size and shape, resistors are divided into fixed and variable.

The information about potentiometers from various physics-related articles is available here. Potentiometer and its general concepts are important topics in physics. Students who want to flourish in physics need to be well known about potentiometer to get deep knowledge about it to do well on their exams. The definition, working principle, and applications are provided here to assist students in effectively understanding the respective topic. Continue to visit our website for additional physics help.

A potentiometer is a long piece of homogeneous wire to which a standard cell is connected. In a real design, a long wire is cut into several pieces, laid out side by side, and connected at the ends with thick metal strips.

When there is a potential difference, current flows in the circuit. A potentiometer is a tool used to measure an unknown voltage compared to a known voltage. It can be used to determine the EMF and internal resistance of a particular cell and to compare the EMF of other cells. Potentiometers use the comparative method.

Readings are more accurate on potentiometers. 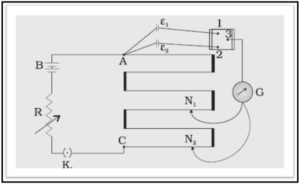 The general principle of a potentiometer depends on the fact that the potential for any length of wire is directly proportional to the length of the wire with a uniform cross-sectional area and a constant current flowing through the wire. If there is no potential difference between the two notes, the current will flow.

The working principle of a potentiometer can be understood and explained using the diagram below. where L is the long resistance wire. The circuit also includes a battery with a known electromotive force (EMF) and a voltage V, called a control voltage. Now connect the battery terminals to both ends of L to draw the first circuit diagram.

We know that I is current, R is total resistance, and V is voltage.
Now we have,

is considered as the resistivity and A is the cross-sectional area
It can be seen that it is also constant for a rheostat.

Here, x is the length of the Potentiometer wire

E is the cell with Lower EMF, and K is the constant.
When the potential difference is zero (0) and there’s no flow of current, then the galvanometer has null detection. Thus, x is considered as the length of the null point. Then, the unknown electromotive force is found by using K and x,

Because the EMF here includes two cells, let L1 and L2 be the null point length of the first cell and second cell with EMF E1 and EMF E2 accordingly.
Therefore,

Audio Control: Rotary and linear potentiometers are widely used to control audio devices to change and control volume and other audio-related signals.

Question 1: What do you mean by a potentiometer?

Answer: A potentiometer is a long piece of homogeneous wire to which a standard cell is connected and it is a tool used to measure an unknown voltage compared to a known voltage.

Question 2: What is the principle of a potentiometer?

Answer: The principle of operation of a potentiometer can be explained because the potential across the wire is directly proportional to the length of the wire.

Question 3: How does a multi-turn potentiometer work?

Answer: The design of the multi-turn slide potentiometer uses a spindle. A wheel that changes a linear position to a variable position is attached to the spring.