Radioactive decay law: The process through which an unstable nucleus by radiation is known as radioactive decay. The word “radioactive” means any substance that includes unstable nuclei. Alpha decay (-decay), beta decay (-decay), and gamma decay (-decay) are 3 of the most significant types of decay, which all entail the discharge of one or more particles. Beta decay is governed by the weak force, while the other two are influenced by electromagnetic and powerful forces, respectively. At the atomic level, radioactive decay is a stochastic (i.e. random) process. As per the quantum theory, no matter how long an atom has lived, it is impossible to forecast when it will decay.

At the level of single atoms, radioactive decay is a natural occurrence. It is impossible to forecast when a certain atom will decay, according to quantum theory. In other words, a radionuclide’s nucleus has no “memory.” A nucleus doesn’t really “age” with the passage of time. As a result, the likelihood of it breaking down does not rise with time but remains constant matter how long the nucleus has been around. This fragile nucleus spontaneously and randomly decomposes to generate a new nucleus throughout its unpredictable disintegration, emitting radiation in form of atomic particles or high-energy rays.The enumeration of disintegrations per second is used to determine radioactivity (activity). The becquerel (Bq) is the SI unit of activity, equivalent to one reciprocal second. The number of decays per second determines the activity, not the kind of decay, the energy of the decay products, or the bioactivities of the radiation. A radionuclide’s specific activity is its activity per unit of amount. As an outcome, specific activity is defined as the activity per unit of radionuclide atoms. It’s usually stated as Bq/g.

The fundamental law of radioactive decay:

The law of radioactive decay is based on the premise that a radionuclide’s nucleus has no “memory” or ability to translate its past activity into its current behaviour. With the passage of time, a nucleus does not “age.” As a result, no matter how long the nucleus has existed, the probability of it breaking down does not rise with time but remains constant. The constant probability could differ substantially across different types of nuclei, resulting in the many diverse decay rates seen. The probability, whatever it is, does not alter with time. This is in stark contrast to sophisticated goods like automobiles and humans, which do display signs of aging.

These aging systems have an increased likelihood of breaking down per unit of time from the moment they are created. The Poisson distribution, which is discrete, is used to simulate aggregate processes like the radioactive decay of a pile of atoms, whereby the single-event probability of realization is very small but the number of time-slices is so vast that there is still a realistic rate of occurrences. Nuclear particle reactions and radioactive decay are two examples of aggregation processes.

where λ is the constant of radioactive decay or disintegration. Now, in time ∆t, the difference in the number of nuclei in the sample is dN = – ∆N. As a result, N’s rate of change (in the limit ∆t 0) is,

So, when we integrate the above equation on both sides, we will get the equation below

Equation (4) is the equation for the law of radioactive decay.

The Rate of Decomposition

Radioactive decay is the spontaneous decay of an atomic nucleus that results in the generation of matter and energy from the nucleus. There are radioactive nuclei with insufficient binding energy to keep the nucleus intact. Nuclear decay happens when an atom’s nucleus becomes unstable and unintentionally releases energy in the form of radiation. As a result, the nucleus of one or more additional elements becomes the nucleus transitions. These offspring nuclei are more stable and have a smaller mass than the parent nucleus (lower energy). 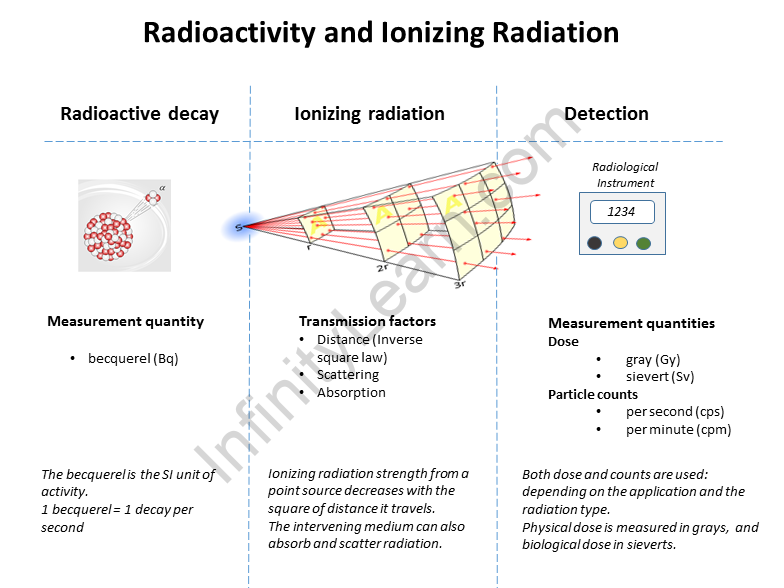 Significance of isotones in NEET exam

Students are required to learn all of the critical chapters of the NEET coursework to get excellent outcomes on the NEET test. Infinity Learn’s critical topics for NEET are one of the most reliable study aids considering they cover all the main concepts in the syllabus. Additionally, these crucial questions are created from past year’s question papers, taking into account the importance of each chapter in the curriculum.

What Kind of Radiation Is the Most Dangerous?

Alpha radiation is by far the most hazardous of the three forms of radiation because it is rapidly absorbed by cells. Beta and gamma radiation, on the other hand, are less hazardous because they are absorbed less by cells and can pass easily through them.

What Does It Mean to Have a Half-Life?

In nuclear physics, the term 'half-life' is used to describe how fast unstable atoms endure radioactive decay to stable nuclei, as well as how long stable atoms exist. In addition, the half-life specifies whether the decay is exponential or non-exponential. The biological half-life of medications and other compounds in the human body, for example, is more important in the medical sciences.

On Earth, how often are gamma rays created?

Gamma rays are naturally produced on Earth by many items emitting radiation, such as nuclear explosions, lightning, and radioactive decay activities. Fusion, fission, alpha decay, and decay are examples of nuclear reactions.