Heinrich Rudolf Hertz, a German physicist, developed the photoelectric effect in 1887. Hertz found that whenever ultraviolet light shines on two metal electrodes with a voltage put across them, then the voltage at which sparking occurs changes. This was related to his work on radio waves. In 1902, German physicist Philipp Lenard established the connection between light and electricity (hence photoelectric). He observed that when a metal surface is lighted, electrically charged particles are freed, and that these particles are identical to electrons, which were found by British physicist Joseph John Thomson in 1897.

The photoelectric effect happens when a substance absorbs electromagnetic radiation and emits electrically charged particles from or within it. A popular definition of the effect is the ejection of electrons from a metal plate when light falls on it. The radiant energy may be infrared, visible, or ultraviolet light, X-rays, or gamma rays, and the emitted particles could be ions (electrically charged atoms or molecules) or electrons.

Because of the perplexing concerns, it presented about the nature of light—particle vs wavelike behaviour—the phenomena was vitally important in the development of modern physics, which were finally resolved by Albert Einstein in 1905. The effect is still significant for research in fields ranging from materials science to astrophysics, as well as serving as the foundation for a wide range of useful gadgets.

Whenever incoming light with an energy larger than the metal’s threshold value strikes the surface, the metal’s tightly bound electrons are released. A picture is a tiny speck of light. If a photon collides with an electron, the sum of its energy is transferred to the electron, causing the electron to eject off the surface. The photon’s remaining energy is converted into a free negative charge known as a photoelectron.

Photoemission is the word used to describe the phenomenon of photoelectrons being emitted from a metal’s surface as a result of light action. Whenever the electrons at a metal’s surface absorb energy from incident light, they use it to overcome the attraction forces that bind them to the metal’s nuclei. 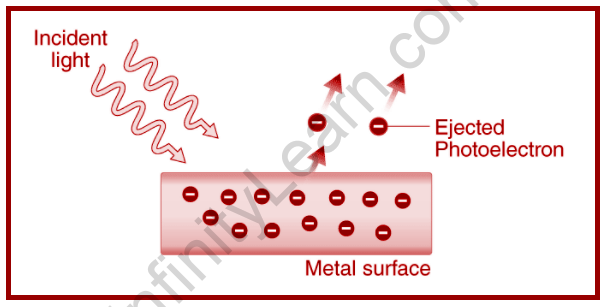 Planck’s Theory and the Photoelectric Effect

In 1905, Einstein modified Planck’s theory to describe the photoelectric effect, which occurs when metal is exposed to light or high photons and releases electrons. The frequency of radiation v determines the kinetic energy of the emitted electrons, not their intensity; for a given metal, there is a frequency 0 below which no electrons are released. Furthermore, emissions happen immediately after the light strikes; there is no apparent delay.

According to Einstein, these effects may be described by two assumptions: light is made up of corpuscles or photons, the power of which is specified by Planck’s equation, and a single metal atom can absorb a single photon or anything. Because low-frequency beams could not create the energy needed to produce photoelectrons, as light energy from continuous waves, Albert Einstein argued that light beats were huge packets of varying energies known as photons, rather than a wave moving through the atmosphere.

Because raising the intensity of low-intensity light will simply produce more low-energy photons, no single photon with appropriate electron production will be produced. Furthermore, the individual photon energy determines the amount of electron energy released, not the strength of the incoming light of a specific frequency.

Photoemission can happen in any object, but metals and other conductors are the most common examples. This is because the process creates a cost imbalance, which causes the barrier to rise until the discharge is entirely exhausted if it is not measured by the current flow. Many functional investigations and devices based on the effect of electric photography require clean metal surfaces in the extracted tubes because non-conductive oxide ports on metal surfaces boost the energy barrier in picture extraction.

By preventing gases from interfering with electron passage between electrodes, the vacuum also aids electron microscopy.

This photoelectric effect cannot be described using the wave model of light. But, this behaviour can be explained by the particle nature of light, which can be regarded as a stream of electromagnetic energy particles. The visible spectrum is made up of photons, which are light ‘particles.’

The energy held by a photon is related to the frequency of light via Planck’s equation.

Einstein’s Contributions towards the Photoelectric Effect

Albert Einstein was the first to successfully explain the photoelectric effect after years of research in this field. He came to the conclusion that the phenomenon was caused by light energy being transported in discrete quantized packets. In 1921, he was awarded the Nobel Prize for his outstanding achievements.

Each photon of energy E is given as,

How can the photoelectric effect be understood?

The easiest way to comprehend the photoelectric effect is to look at the atom's line spectrum.

What are the applications of the Photoelectric Effect?

What is the importance of the photoelectric effect?