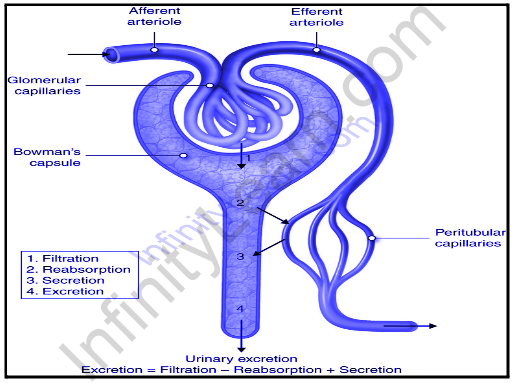 The formation of urine in different organism

In living organisms such as humans, urine formation begins in the kidney nephrons. As plasma filtration occurs in the nephron and the fluid found inside the nephron is similar to blood plasma without macromolecules such as proteins. Eventually fluid passes through the nephron tube through which water and various other essential components such as amino acids, glucose, and other nutrients re-enter the bloodstream, leaving a buildup of waste called urine, or bladder. The composition of the urine is mainly composed of water, urea, inorganic salts, creatinine, ammonia, and pigmented products formed by the rupture of the blood and that is why the colour of the urine is yellow. Apart from that which is not normally re-absorbed it stays in the urine.

Although in the case of birds, reptiles, and land insects the main product is soluble uric acid instead of water-soluble urea. Also, the colour of the urine of birds and reptiles is primarily white and hangs uric acid crystals that are transferred to the cloaca mixed with faeces before they are excreted. And in the case of land insects, they produce strong urine.

Creatures such as aquatic and aquatic animals and fish excrete urea solutions and their excrement organs do not recycle much water, so their urine remains dissolved.

Steps Involved in Urine Formation
The waste is excreted by the human body in the form of urine and in this process of excretion, the kidneys play a vital role. As human urine is made up of 95 per cent water and 5 per cent solid waste. And the whole process of filtering takes place in the nephron and for this reason, is known as the structure and function of the kidneys.

The regeneration process is mainly performed on the kidney tubes and 99% filtrate is found in this process only. And this process is kind of practical and practical. Secret: This step is also known as tubular secretion as here the tubular cells produce various substances such as hydrogen ions, potassium ions, etc. This process helps maintain acid-base control functions. In addition, secreted ions combine with the filtrate to form urine. In addition, this urine escapes from the nephron tubules to the collecting canals.

Urine is made up of various products such as 95% water and 5% waste nitrogen. These nitrogenous wastes, including urea, ammonia, creatinine, are excreted in the urine. Along with that other substances such as potassium and sodium are also present in the urine.

The amount of urine excreted by a person

All living things excrete faeces and urine is sterile fluid and is usually a waste product. They are mainly composed of water, salt, urea, and other soluble nitrogen products. This process of urination is performed by the kidneys and is excreted through the urethra. The formation of human urine in water, urea, salt and pork. Urinary incontinence varies for a variety of reasons such as:

For all these reasons, the total amount of urine production is directly proportional to the volume of liquids and other nitrogen-containing substances.

The next step in urine formation is tubular extraction. Here, tubular cells produce substances such as hydrogen ions, potassium ions, etc. in the filtrate. Through this process, ionic, acid-base, and the balance of other body fluids is maintained. Concealed ions mix with the filtrate and form urine. Urine flows from the nephron tubule to the collection canal.

The urine produced is 95% water and 5% wastes nitrogen. Waste such as urea, ammonia, creatinine is excreted in the urine. Apart from this, potassium, sodium, and calcium ions are also released.

Osmoregulation is the process of controlling body fluids and their songs. It maintains the osmotic pressure of the blood and contributes to homeostasis. That is why it is recommended to consume about 2 litres of water, which contributes to the proper functioning of our kidneys. For example, we use a lot of water in the summer, but still, we urinate fewer times in the summer than in the winter and the urine volume is also high. The reason is that we lose a lot of water in our bodies in the summer due to sweating. Thus, to keep the body hydrated, our kidneys absorb large amounts of water.

Q. Describe the formation of urine in the human body?

Ans: Human urine contains 95% water and 5% of the fluid listed below:

All of these things reduce urination. In addition, there are various other elements such as dissolved ions, organic and inorganic compounds such as metabolites, proteins, hormones.

Since urine composition is the most important part of the human body, it is very important to examine urine composition. The composition of the urine should be accurate and precise as it ensures that there are no proper substances in the kidneys. Along with that, there is a single process called osmoregulation that maintains homeostasis in the body and facilitates the dispersal of solutes and water in an immovable membrane to maintain osmotic balance.