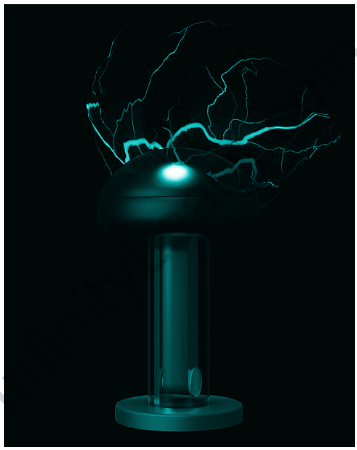 You must have seen or heard about a device that makes your hair stand on end, right?

On the metal dome, the Van de Graaff generator deposits a tremendous amount of positive electrical charge (oblate, globe). A stunning display of lightning and other phenomena results from this vast volume of positive electrical charge. A plastic pulley connected to an electric motor is used at the bottom end of the generator. The pulley is covered by a rubber belt. Rubbing happens when the pulley rotates; the pulley accumulates negative charges, while the inside surface of the rubber belt (near the plastic pulley) accumulates an equivalent amount of positive charges. By induction, the rubber belt’s exterior surface obtains an equivalent quantity of negative charge. An electrode in the form of a comb or brush is provided to drain negative charges from the rubber belt’s exterior surface to the ground. And that pretty much sums up the topic of this article.

Around 1930, Robert J. Van de Graaff, an American physicist, began developing the high-voltage electrostatic generator that carries his name. They started out modest and grew in size over time; one from 1933 stood 40 feet tall and could generate 5 million volts! (That generator is now on display at the Museum of Science in Boston.) Van de Graaff intended to make it possible for scientists to accelerate particles for atomic study. However, his invention has become well-known as a technique of presenting several electrostatic principles to a much wider audience. Putting one hand on the generator has caused generations of students’ hair to stand on end. A big spark between the generator and a nearby object is another notable demonstration of the generator’s electrostatic effect.

The Van De Graaff generator is based on the static electricity theory. As we all know, the matter is made up of atoms, which are made up of electrons, neutrons, and protons. Electrons have a negative charge, whereas protons have a positive charge. When the quantity of electrons and protons in a substance remains constant, it is said to be neutral in charge. A negatively charged matter has more electrons than protons, whereas a positively charged matter has the opposite. Electrons can go from one material to the next.

The belt must be turned at a steady speed around the two rollers by the motor. The lower roller is made of a triboelectric substance that is more durable. When the motor turns the insulated belt around the lower roller, electrons are collected and transferred to the lower roller. As time passes, more and more charge concentrates on the roller. The electrons are repelled from the brush assembly’s tips as a result of the charge concentration phenomena. Between the bottom roller and brush assembly, it also begins to attract electrons from the air molecules. The positively charged air molecules are carried away from the negatively charged roller by this mechanism. As a result, the belt is positively charged and advances towards the top rollers.

The upper roller is made of or coated with a higher-in-the-triboelectric-series material, such as nylon, in order to reject the positive charge on the belt. At one end, the top brush is directly attached to the inside of the output terminal or sphere, while at the other, it practically touches the upper roller and belt. The brush’s electrons are drawn to the positive charges on the belt’s surface. The air particles disintegrate as well, causing free electrons to migrate towards the belt. The sphere absorbs all of the charges, and any excess is dispersed about the terminal output or sphere.

Getting close to a running generator can be nerve-wracking. This is due to the fact that the charges are transmitted to your body, specifically your hair. Every hair tries to move as far away from every other hair as possible due to electrostatic repulsion between identical charges. This causes hair to “rise” and can be felt on the head, arms, and other parts of the body.

Two individuals and a plastic footstool are required for the best results. Before your assistant turns on the generator, stand on the footstool and place one hand palm down on the Van de Graaff globe. During the entire time the machine is running, keep one hand on the globe and the other at your side, making sure not to touch anything else. Wait 1- 2 minutes after slightly shaking your hair to free the strands.

You should be able to feel each individual strand begin to lift at this point. Allow your assistant to hold a mirror up to you (but not too close!) so you can see the results. The best hair is fine, light, and long. While the machine is running, make sure you don’t take your hand off the globe, touch anyone, or get off the footstool. You will experience a small shock if you do so. Because you’ve finished the electrical connection and grounded yourself, this is the case. (The footstool acts as a sound barrier.) Instead of lingering on your body, static electricity travels to the ground. You can sense the outcomes.

Due to the development of positive electrical charges on the dome, make it in miniature with a Van de Graaff Generator.

Bring a spherical object, such as a mixing bowl or a juice can Discharge Wand, close to the dome for best results. To reduce the chance of receiving a shock, don a glove or use a dry towel to grip the things as you approach the dome. The discharge between the rounded object and the collection dome is accompanied by a crackling sound and can be brightened and increased in frequency by bringing the rounded object closer (from 2″ to 1/2″ away).

When the rounded object is removed, the discharges grow weaker and less frequent, and they can only be seen in a darker room.

When you come into contact with a Van de Graaff generator, what happens?

The charges can't go to the ground if you touch the generator right now. You've been flooded with electrons. The electrons dislike each other and are attempting to go as far apart as possible. This causes your hair to stand up because it is full of electrons that repel one another.

What causes the Van de Graaff generator to spark?

What are some of the risks associated with using a Van de Graaff generator?

What is a Van De Graff Generator's polarity?