• Atomic and Ionic Radii
Atomic and ionic radii of alkali metals increase on moving down the group i.e., they increase in size going from Li to Cs. Alkali metals form monovalent cations by losing one valence electron. Thus cationic radius is less as compared to the parent atom.
• Ionization Enthalpy
The ionization enthalpies of the alkali metals are generally low and decrease down the group from Li to Cs.
Reason: Since alkali metals possess large atomic sizes as a result of which the valence s-electron (ns1) can be easly removed. These values decrease down the group because of decrease in the magnitude of the force of attraction with the nucleus on account of increased atomic radii and screening effect.
• Hydration Enthalpy
Smaller the size of the ion, more is its tendency to get hydrated hence more is the hydration enthalpy.
Hydration enthalpies of alkali metal ions decrease with increase in ionic sizes.
Li+ > Na+ > K+ > Rb+ > Cs+
• Physical Properties
(i) All the alkali metals are silvery white, soft and light metals.
(ii) They have generally low density which increases down the group.
(iii) They impart colour to an oxidising flame. This is because the heat from the flame excites the outermost orbital electron to a higher energy level. When the excited electron comes back to the ground state, there is emission of radiation in the visible region.
• Chemical Properties of Alkali Metals
(i) Reaction with air:
When exposed to air surface of the alkali metals get tarnished due the formation of oxides and hydroxides.
Alkali metals combine with oxygen upon heating to form different oxides depending upon their nature.

(iii) Reaction with hydrogen:
The alkali metals combine with hydrogen at about 673 K (lithium at 1073 K) to form hydrides.
2M + H2 ————-> 2M+
The ionic character of hydrides increases from Li to Cs.
(iv) Reaction with halogens:
Alkali metals combine with halogens directly to form metal halides.
2M + X2————–> 2MX
They have high melting and boiling points.
Order of reactivity of M:

(v) Reducing nature:
The alkali metals are strong reducing agents. In aqueous solution it has been observed that the reducing character of alkali metals follows the sequence Na < K < Rb < Cs < Li, Li is the strongest while sodium is least powerful reducing agent. This can be explained in terms of electrode potentials (E°). Since the electrode potential of Li is the lowest. Thus Li is the strongest reducing agent.
(vi) Solubility in liquid ammonia:
The alkali metals dissolve in liquid ammonia to give deep blue solution. The solution is conducting in nature.
M+ (x + y) NH3 ———-> [M (NH3) X]+ + [e (NH3) y]–
When light falls on the ammoniated electrons, they absorb energy corresponding to red colour and the light which emits from it has blue colour. In concentrated solution colour changes from blue to bronze. The blue solutions are paramagnetic while the concentrated solutions are diamagnetic.
• Uses of Alkali Metals
Uses of Lithium
(i) Lithium is used as deoxidiser in the purification of copper and nickel.
(ii) Lithium is used to make both primary and secondary batteries.
(iii) Lithium hydride is used as source of hydrogen for meteorological purposes.
(iv) Lithium aluminium hydride (LiAlH4) is a good reducing agent.
(v) Lithium carbonate is used in making glass.
Uses of Sodium
(i) Used as sodium amalgum in laboratory (synthesis of organic compounds).
(ii) Sodium is used in sodium vapour lamp.
(iii) In molten state, it is used in nuclear reactors.
(iv) An alloy of sodium-potassium is used in high temperature thermometres.
Uses of Potassium
(i) Salts of potassium are used in fertilizers.
(ii) Used as reducing agent.
Uses of Cesium
(i) In rocket propellent
(ii) In photographic cells.
• Group 2 Elements: Alkaline Earth Metals
Alkaline Earth Metals: They were named alkaline earth metals since they were alkaline in nature like alkali metals oxides and they were found in the earth’s crust.
Example, Be (Beryllium), Ca, Mg, Sr etc.
• Electronic Configuration
Their general electronic configuration is represented as [noble gas] ns2. 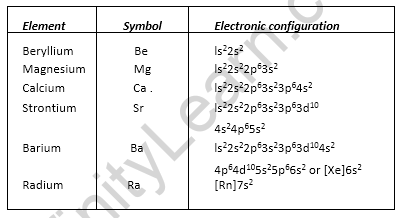 • Atomic and Ionic Radii
Atomic and ionic radii of alkaline earth metals one comparatively smaller than alkali metals. Within the group atomic and ionic radii increases with the increase in atomic number. Reason: Because these elements have only two valence electrons and the magnitude of the force of attraction with the nucleus is quite small.
• Ionization Enthalpies
These metals also have low ionization enthalpies due to fairly large size of atoms. As the atomic sizes increase down the group ionization enthalpies are expected to decrease in the same manner.
Due to their small size in comparison to alkali metals first ionization enthalpies of alkaline earth metals is higher than that of alkali metals.
• Hydration Enthalpies
The hydration enthalpies of alkaline earth metal ions are larger than those of the alkali metals. Thus alkaline earth metals have more tendency to become hydrate. The hydration enthalpies decreases down the group since the cationic size increases.
Be2+ > Mg2+ > Ca2+ > Sr2+ > Ba2+
Metallic character: They have strong metallic bonds as compared to the alkali metals in the same period. This is due to the smaller kernel size of alkaline earth metal and two valence electrons present in the outermost shell.
• Physical Properties
(i) They are harder than alkali metals.
(ii) M.P and B.P are higher than the corresponding alkali metals due to their small size.
(iii) The electropositive character increases down the group.
(iv) Except Be and Mg, all these metals impart characteristic colour to the flame.
(v) The alkaline earth metals possess high thermal and electrical conductivity.
• Chemical Properties
1. Reaction with oxygen. Beryllium and magnesium are kinetically inert to oxygen because of the formation of a thin film of oxide on their surface.
Reactivity towards oxygen increases as going down the group.
2. Reaction with water. Since these metals are less electropositive than alkali metals, they are less reactive towards water.
Magnesium reacts with boiling water or steam. Rest of the members reacts even with cold water.
Mg + 2H20 ——-> Mg(OH)2 + H2
Ca + 2H20 ————> Ca(OH)2 + H2
3. Reaction with halogens. They combine with the halogens at appropriate temperature to form corresponding halides MX2.
M + X2 ——–> MX2 (X = F, Cl, Br, I)
Thermal decomposition of (NH4)2 BeF4is used for the preparation of BeF2.
4. Reaction with hydrogen. These metals except Be combine with hydrogen directly upon heating to form metal hydrides.

In vapour phase the compound exist as a dimer which decomposes at about 1000K to give monomer in which Be atom is in sp hybridisation state.
Sulphates
(i) The sulphates of alkaline earth metals are white solids and quite stable to heat.
(ii) BeS04 and MgS04 are readily soluble in water. Solubility decreases from BeS04 to BaS04.
Reason. Due to greater hydration enthalpies of Be2+ ions and Mg2+ ions they overcome the lattice enthalpy factor. Their sulphates are soluble in water.
Carbonates
Carbonates of alkaline earth metals are thermally unstable and decompose on heating.

• Some Important Compounds of Calcium

Uses:
(i) It is used in the manufacturing of building material.
(ii) Used in white-wash as a disinfectant.
(iii) Used to detect C02 gas in the laboratory.
(iii) Calcium Carbonate or Limestone (CaC03)
Preparation: Calcium carbonate occurs in nature in different forms like limestone, marble, chalk etc. It can be prepared by passing C02 through slaked lime in limited amount.
Ca(OH)2 + C02 ———> CaC03 + H20
It can also prepared by the reaction of a solution of sodium carbonate with calcium chloride.
CaCl2 + Na2C03 ————> CaC03 + 2NaCl

Uses:
(i) In the manufacturing of Quick Lime.
(ii) With MgC03 used as flux in the extraction of metals.
(iii) Used as an antacid.
(iv) In the manufacture of high quality paper.
(iv) Calcium Sulphate (Plaster of Paris) CaS04-1/2H20
Preparation: It is obtained when gypsum CaS04– 2 H20 is heated to 393 K
2(CaS04-2H20) ———-> 2(CaS04) . H20 + 3H20
Above 393 K anhydrous CaS04 is formed, which is called ‘dead burnt plaster’.
Properties:
(i) It is a white atmosphous powder.
(ii) When it is mixed in adequate quantity of water it forms a plastic hard mass within 15 minutes.
Uses:
(i) Commonly used in making pottery, ceramics etc.
(ii) Used in the surgical bandages for setting the fractured bone or sprain.
(iii) For making statues, ornamental work, decorative material etc.
(v) Cement
Preparation: Prepared by combining a material rich in CaO with other material such as clay, which contains Si02 along with the oxides of aluminium, iron and magnesium.

The first three elements of second period (Li, Be, B) show diagonal similarity with the elements (Mg, Al, Si) of third period. Such similarities are termed as diagonal relationship.
• The alkali metals are silvery-white soft metals. They are highly reactive. Their aqueous solutions are strongly alkaline in nature. Their atomic and ionic sizes increase on moving down the group and ionization enthalpies decrease systematically down the group.
• Alkaline earth metals. They are much similar to alkali metals but due to small size some differences are there. Their oxides and hydroxides are less basic than the alkali metals.
• Sodium hydroxide (NaOH) is prepared by the electrolysis of aq NaCl in Castner- Kellner cell.
Slaked lime Ca(OH)2 is formed by the action of quick lime on water.
• Gypsum is CaS04. 2 H20. On heating upto 390 K CaS04/2H20 (plaster of paris) is formed.