In this unit you will learn different ways in which you can express your ideas differently, more precisely and more effectively by replacing words with their own noun forms.

Look at these sentences.

A.1.
Verbs into nouns :
Complete the following chart by filling in the blanks with either the verb or the noun forms. One example has been done for you.

A.2.
Study the cartoons below :
See the Workbook on Page 176

What are the people trying to say ? Study the first example and then complete the rest of the sentences using the same pattern.

2. the reduction of working hours
3. reporting to office on time
4. the loss of their jobs
5. work atmosphere
6. poaching animals

A. 3.
Combine the following sentences by nominalising the first verb. The first sentence has been done as an example.

7. The eye witness described the accident scene vividly. This helped the police find the culprit The vivid

2. the explosion of the bomb
3. cannot launch our project, approval
4. are very concerned, rise in crime rate in the last two
5. The participation of thousands of people in the charity walk
6. The consumption of drugs, number of young people has become an issue of social
7. description of the accident scene vividly by the eye witness helped the police find the culprit
8. presentation of his project, to bag multimillion dollar order
9. spearheading the fight against apartheid
10. awarded the death penalty for committing a series of cold blooded murders

A. 4.
Read the following extract from a Newspaper.

An ancient ship, over 500 years old, has been recovered off the coast of Kerala. Salvage experts say ……….

Given below are some extracts from Newspapers. Underline the most important verb. Then use the noun form of that verb to create a headline, as shown above.

A.5.
Fill in the blanks with the noun forms of the verbs given in brackets.

Hema : Recently I read an article about the ________ (improve) taking place in the health services.
Neena : When people get proper health care, it is bound to increase their life ________ (expect).
Hema : Of course doctors have to show greater ________ (dedicate) to their profession, particularly by ________ (bestow) greater ________ (attend) on the rural areas.
Neena : I agree. But, at the same time the government should also make adequate ________ (provide) for decent living conditions for the doctors serving in villages.
Hema : Besides sending doctors to rural areas, steps should be taken for the ________ (supply) of standard drugs to primary health centres. ________ (contaminate) of intravenous fluids and even vaccines due to non ________ (available) of ________ (refrigerate) facilities continues to pose a severe threat to people.
Neena : Besides health, we should also address the needs of people in ________ (educate) and ________ (employ). Only then can we achieve substantial ________ (develop) of the human resource.
Answer:
improvement
expectancy
dedication, bestowing, attention
provision
supply, Contamination, availability, refrigeration
education, employment, development

B. Adjectives into Nouns :

Read the following examples. Notice how the adjective in the first sentence is changed to its noun form in the second sentence.
See the Workbook on Page 180

B.1.
Combine the following pairs of sentences by changing the adjective to a noun.

B.2.
Fill in the blanks in the table below. Then check your answers in a dictionary.

What type of people do you like most? In the box below there are some suggestions about different types of people. Discuss with your partner and tell him at least five qualities that you like and five that you do not like. You may add more words to the list given below.

Now share your suggestions with the rest of the class. Your teacher will build up a list of qualities (adjectives) on the blackboard. Add them to the adjectives above and classify them under two columns, namely desirable and undesirable.

Work in pairs: Study the pictures given below. Partner A can think of any one of the personalities and describe the qualities for which he admires him/her.

Partner B must guess the person being described. You may give a maximum of three clues in three chances to guess the answer correctly.

Example : He is a national leader. I admire him for his vision, statesmanship and intelligence. Who is he ?
Answer:
Is he Jawaharlal Nehru ?
(Note : Even though someone is dead, we can still use the present tense when we talk about the qualities we admire)
Answer:
The people in the pictures are

C. 1.
Look at these signs/notices used in different parts of the world. Guess what they mean. Write your answers by using a word with an ‘ing’ form. One example has been done for you. 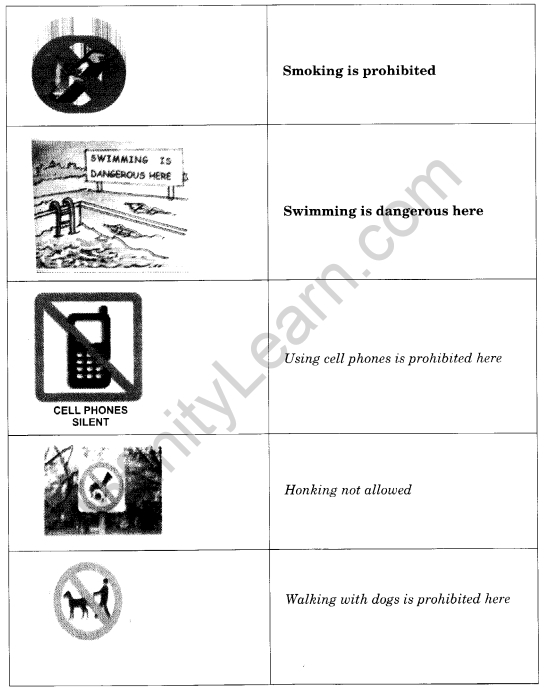 C.2.
Now use your imagination and draw two of your own signs. Show them to your partner and ask him to guess what they mean. He must give answers using the ‘ing’ form.

C.3.
Read the list of activities given below: On an average which activity, according to you, uses the most energy. Order the activities from those that use most energy to the least. When you have finished, discuss the order with your partner using the ‘ing’ form eg :

Example: I think jogging uses the most energy
No I don’t think so. I think swimming uses more energy.
OK perhaps swimming is second. After that, I think cycling … specially if it is uphill.

Reorder the following words and phrases to make meaningful sentences.

D.1.
Read this article about a person who is head of a big multinational company. Replace the underlined words with a noun form using ‘ing’ after a conjunction or preposition. One example has been done for you.

After graduating from The Janta College of Commerce, Amtul studied Business Administration. Today Amtul is a successful entrepreneur and heading (and head of) one of the biggest chain stores. Her life story is simple…
Answer:
After completing her school, Amtul joined the Janta College for Commerce. She applied for a course in Business Management with the Bright Scholars Business College where she was admitted after clearing the entrance exam. Amtul left the college but did not take the exams.

She decided to see the world before setting up her home. She spent the next five years travelling to different countries and took up small assignments to sustain her living. She thought about her career seriously while she worked in a home store in America.

After returning to her country, Amtul purchased a small store called ‘Your Store’. The store soon became popular. After Amtul set up a chain of stores, many people applied for franchise with her. She has proved that womanhood is no barrier to success in a man’s world.

D.2.
Complete the following sentences by filling the blanks with a word/words from the box.

D.3.
Complete the following paragraph by filling in the blanks with the most appropriate words given.

Scientists all over the world are trying to invent newer ways for (1) __________ of energy without harming the environment. In Netherlands a team of scientists is researching into (2) __________ the waters of the North Sea to generate enough energy for thousands of homes.

The experiment involves (3) __________ a battery, using salt and fresh water streams and channelizing them over stacks of membranes. The salt water contains positively charged sodium ions and negatively charged chloride ions. Electrodes were set up to create a battery which would generate power.

Through this research the Dutch are aiming at setting up a 200 mW power plant which will generate enough power to cater for three provinces. Blue Water energy will be 30-40% more efficient than burning coal. It is also (4) __________ and (5) __________. Scientists in other parts of the world are also busy finding ways and means to generate energy. The (6) __________ of a childhood pastime of flying kites gave the senior scientists of Delhi University a brilliant idea. They felt that this simple childhood game could be used to provide some kind of breakthrough. By (7) __________ a few kites tethered to a generator, this team realized that they could produce 10 KW of power. This was sufficient to power 10 family homes. The researchers now plan to carry this (8) __________ further. Using multiple kites, they plan to generate 50 KW of power. They call this invention, Laddermill.