Concept of Infrastructure
Infrastructure refers to such core elements of economic and social change which serves as a support system to production activity in the economy.

Economic Infrastructure
It refers to all such elements of economic change which serve as a support system to the process of economic growth.

Social Infrastructure
It refers to the core elements of social change which serve as a support system for the process of social development of a country.

Infrastructure and Development
Following observations show how exactly infrastructure contributes to the process of growth and development.

The State of Infrastructure in India
(i) Energy Energy is the most important component of economic infrastructure. Industrial production is not possible if energy is not available.
Energy is broadly classified as commercial and non-commercial energy.

(iv) Power/Electricity The most visible form of energy, which is often identified with progress in moderation civilization is power, commonly called electricity.
(v) Some Challenges in the Power Sector

(vi) Health Health is a state of complete physical, mental and social well-being. It does not simply mean absence of disease; rather it means a sound physical and mental state of the individual.

Development of Health Services After Independence
There has been a large scale improvement in health facilities. Following are the highlights

Health as an Emerging Challenge
Points given below highlight the deficiencies of our social infrastructure in terms of health facilities.

Concept, Types and Importance of Infrastructure
Infrastructure is basic physical and organisational structure needed for the operation of a society or enterprise. It provides supporting services in the main areas of industrial and agricultural production, domestic and foreign trade and commerce. Infrastructural installations do not direcdy produce goods but help in promoting production activities in an economy. e.g. transport, communication, banking, power, etc.

Social Infrastructure It refers to the core elements of social change which serve as a foundation for the process of social development of a country. It contributes to economic processes indirectly and from outside the system of production and distribution, e.g. educational institutions, hospitals, sanitary conditions and housing facilities, etc.

Relevance of Infrastructure
Infrastructure is the support system which provides support to the efficient working of a modem industrial economy. Modem agriculture also largely depends on it

We use modern roadways, railways and shipping i facilities. In recent times, agriculture also depends on insurance and banking system.
Inadequate infrastructure can have multiple adverse effects on health. Improvements in water supply and – sanitation have a large impact by reducing morbidity (state of being unhealthy or diseased) from major

The State of Infrastructure in India

Infrastructure State in Rural Area
Majority of India’s population still lives in rural area.
Infrastructure state in rural India can be understood from the following points

Future Prospects in India
Some economists have projected that India will become the third biggest economy in the world, a few decades from now. For that to happen, India will have to boost its infrastructure investment.

Energy
Energy is a critical aspect of development process of a nation. It is essential for industries, agriculture and related areas like production and transportation of fertilisers, pesticides and farm equipment. It is also required in house for cooking, household lighting and heating etc.
Sources of Energy
1. Conventional Sources of Energy
There are two types of conventional sources of energy

More then 60% of Indian households depend on the traditional sources of energy. In meeting their regular cooking and heating needs.

Primary and Final Sources of Energy
Primary Sources They are those sources which are the gift of nature to the Earth. They do not require any transformation before their use. They are directly used as the inputs of production. e.g., coal, lignite, petroleum, gas, etc.

Final Sources They sources are used as a final product.
This involves transformation process, transforming inputs into final outputs like transformation of coal energy into electricity.

The critical feature of India’s energy sector and its linkages to the economy, is the import dependence on crude and petroleum products, which is likely to grow rapidly to more than 100% of the need in the near future.

Sectoral Pattern of Energy Consumption in India
Earlier till 1953-54, transport sector was the largest consumer of commercial energy but it declined thereafter and industrial sector has been increasing. The share of oil and gas is highest among all commercial energy consumption.

Power/Electricity
The most visible form of energy, which is often identified with progress in modern civilisation, is power, commonly called electricity. It is a critical component of infrastructure that determines the economic development of a country. The growth rate of demand for power is generally higher than the GDP growth rate. Studies point that in order to have 8% per annum, power supply needs to grow around 1. annually.

In 2010-11, thermal sources accounted for almost 65% generation capacity in India. Hydel and wind power accounted for 32.5% while nuclear power accounted only 2.5%. India’s energy policy encourages two energy sources; hydel and wind, as they do not rely on fossil fuel and hence, avoid carbon emissions and are renewable in nature. It has resulted in faster growth of electricity produced from there two sources. 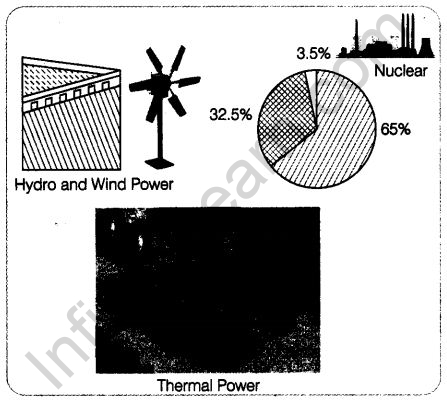 Atomic energy is an important source of electric power. At present, nuclear energy accounts for only 2.5% of total energy consumption, against a global average of 13% which is too low. Hence, some scholars suggest to generate more electricity through atomic sources.

Use of Solar Energy in Thane
There is a use of solar energy on large scale in Thane city. The use of solar energy, which was considered a somewhat far fetched concept, has bought in real benefits and results in cost and energy saving, In this city, solar energy is being applied to heat water, power traffic signals and advertising hoardings, The experiment is lead by Thane Municipal Corporation. It has made compulsory for all new buildings in the city to install solar water heating system.

Some Challenges in the Power Sector
Energy, in a developing country like India, is a basic put required to sustain economic growth and to provide basic amenities of life to the entire population of a country.

Continued economic development and raising population is driving the demand for more energy than what India is currendy producing. Instead of investing in already installed power sector, government has shifted interest into the private sector particularly for the distribution of electricity at much higher prices.

Power Distribution : The Case of Delhi
Since, independence power management in the capital has changed hands four times. The Delhi State Electricity Board (DSEB) was set up in 1951. This was succeeded by the Delhi Electric Supply Undertaking (DESU) in 1958. The Delhi Vidyut Board (DVB) came into existence as SEB in February 1997.

The tariff structure and other regulatory issues are monitored by the Delhi Electricity Regulatory Commission (DERC). Though it was expected that there will be greater improvement in power distribution and the consumers will benefit in a major way, experience shows unsatisfactory results.

Health
A person’s ability to work depends largely on his health. Good health enhances the quality of life. Health is not only absence of disease but also the ability to realise one’s potential. It is a yardstick of one’s well being.
Health is an important component of social infrastructure. It is the holistic process related to the overall growth and development of the nation. Scholars assess people’s health by taking into account indicators like infant mortality and maternal mortality rate, life expectancy and nutrition levels, alongwith incidence of communicable and non-communicable diseases.

Development of health infrastructure ensures a country about healthy manpower for production of goods and services.

Health infrastructure includes hospitals, doctors, nurses and other para-medical professionals, beds, equipment required in hospitals and a well developed pharmaceutical industry. Only the presence of infrastructure is not enough to have healthy people but it should be accessable to all the people easily.

State of Health Infrastructure in India
The government has the constitutional obligation to guide and regulate all health related issues such as medical education, adulteration of food, drugs and poisons, medical profession, vital statistics, mental, deficiency and lunacy. Central Council of Health and Family Welfare collects information and renders financial and technical assistance to State Governments, union territories and other bodies for implementation of important health programmes in the country.

Private sector has also been contributing significantly in medical education and training, medical technologies and diagnostics, manufacture and sale of pharmaceuticals, hospital construction and medical services.

2. Secondary Healthcare
When condition of a patient is not managed by PHCs, they are referred to secondary or tertiary hospitals. Health care institutes having better facilities for surgery, X-ray, ECG (Electro Cardio Graph) are called secondary healthcare institutes. They function both as primary health care provider and also provide better health care facilities. They are mostly located in district and headquarters in big towns.

3. Tertiary Healthcare
In tertiary sector, there are the hospitals which have advanced level equipment and medicines and undertake all the complicated health problems, which could not be managed by primary and secondary hospitals.
This sector also includes many premier institutes which not only impart quality medical education and conduct research but also provide specialised health care.

Medical Tourism – A Great Opportunity
Now-a-days foreigners visit India for surgeries,liver transplants, dental and even cosmetic care etc, the reason is, our health gervices combine latest medical technologies with qualified professionals and is cheaper for foreigners as compared to costs of similar health careaervices in their own countries. In 2004-05, as many as 150000 foreigners visited India for medical treatment, this figure is likely to increase by 15% each year. Health infrastructure can be upgraded to attract more foreigners to India.
ISM has huge potential and can solve a large part of our health care problems because they are effective, safe, and inexpensive.

Indicators of Health an Health Infrastructure :critical Appraisal
(i) Health status of the country can be assessed through indicators such as infant mortality and maternal mortality rates, life expectancy and nutrition levels, alongwith the incidence of communicable diseases.
iholars argue that there is greater scope for the role of government in the health sector. 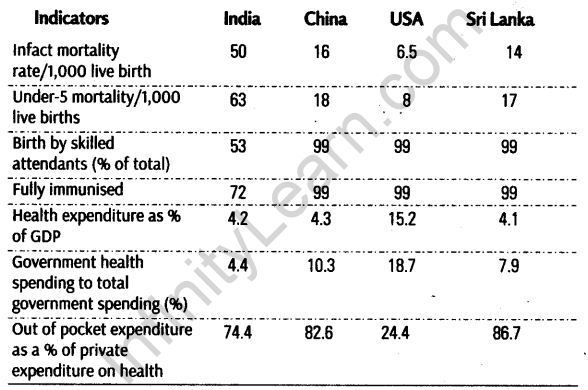 Source World Health Statistics 2011. www.worldbank.org
From the given table, following facts can be concluded

Women’s Health
Women constitute about half the total population in India. They suffer many disadvantages as compared to men in the areas of education, participation in economic activities and health care. The child sex ratio has been detonated from 927 in 2001 to 914 in 2011.

There is growing incidence of female foeticide in the country. Close to 300000 girls under the age of 15 are not only married but have already borne children, at least once.

More than 50% of married women between the age group of 15 and 49 years suffer from anaemia caused by iron deficiency. It has contributed to 19% of maternal deaths. Abortions are major cause of maternal morbidity and mortality in India.

Health : A Vital Public Good and a Basic Human Right All citizens can get better health facilities if public health services are decentralised. Success against diseases depends on education and efficient health infrastructure. So it is necessary to create awareness on health and provide efficient system. The role of telecom and IT in this regard is very important. The ultimate goal should be to help people move towards a better quality of life.