Question.2 Give the meaning of utility.
Answer. Utility means actual or expected satisfaction to a consumer from the consumption of a good.

Question.7 A and B are substitute goods. Explain,the effect of rise in price of A on the demand for B. 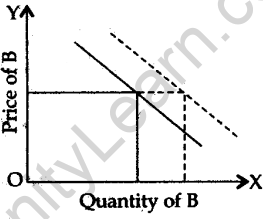 Question.8 Calculate marginal cost at each level of output:

Question.9 At a price of Rs 10 per unit the supply of a good is 80 units. When its price rises to Rs 12 per unit, its supply rases by 20 per cent. Calculate price elasticity of supply.
Answer.

Question.10 Explain any two causes of a rightward shift in supply curve.
Answer. The supply Curve can shift rightwards because of the following two reasons:

Question.11 A consumer consumes only two goods and is in equilibrium. Show that price and . M demand for a good, are inversely related. Explain using utility analysis.
Answer.

Question.12 The quantity demanded of a good is 150O units at the price of Rs 10 per unit. Its price elasticity of demand is (-)1.5. Calculate its quantity demanded, when its price falls to Rs 8 per unit.
Answer.

Or
Explain the geometric method of calculating price elasticity ofdemand.
Answer. See Q. 7, 2009 (I Outside Delhi).

Question.13 State the main features of a perfectly competitive market.
Answer. Perfect competition refers to a market situation where there are very large number of buyers and sellers dealing in a homogeneous product at a price fixed by the industry. The various features of Perfect Contention are: 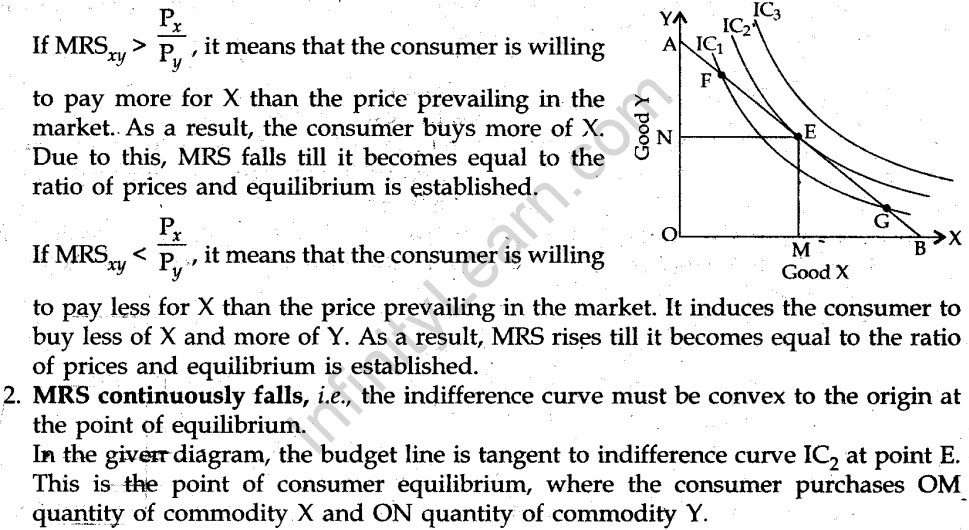 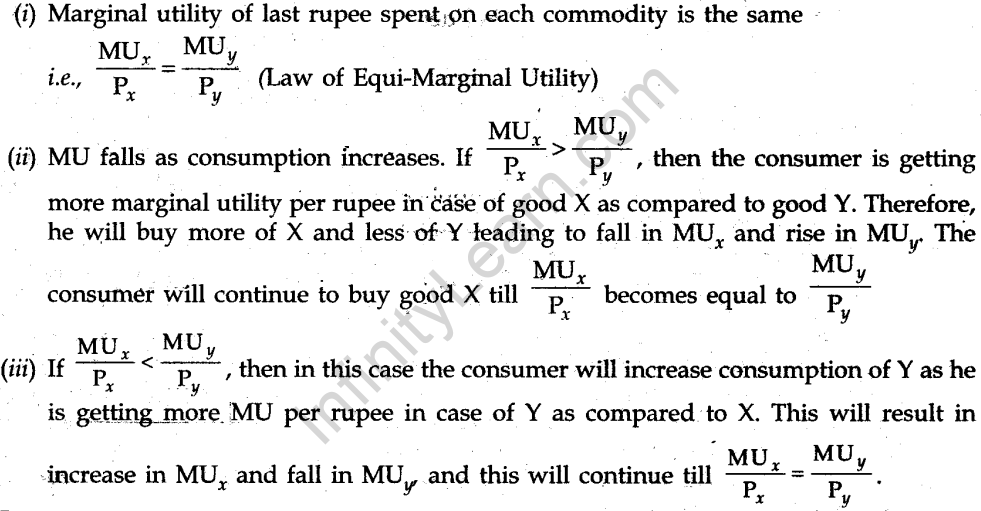 Question.15 Explain the conditions of producer’s equilibrium with the help of a numerical example. Use marginal cost and marginal revenue approach.
Answer. Producer’s equilibrium means that Combination of price and output which yields the producer maximum profit, and the profit declines as more is produced.
According to MR-MC approach, Producer’s equilibrium refers to the stage of that output level at which:
MC = MR
Every producer aims to maximize the total profits. For this, a firm compares its MR with its MC. Profits will increase as long as MR exceeds MC and profits will fall if MR is less than MC. So, equilibrium is not achieved when MC < MR as it is possible to add to profits by producing more. The producer is also not in equilibrium when MC>MR because benefit is less than the cost. It means, the firm will be at equilibrium only when MC = MR. Output beyond this level will reduce profits.

In the above table, the producer will be in equilibrium when he produces 5 units of output as at this level his profits are maximum and both the conditions of equilibrium are satisfied.

Question.16 Explain the meaning of excess supply of a commodity and its chain of effects on price, demand and supply of the commodity, (use diagram)
Answer.

Note: Explain the meaning of ‘excess supply of a commodity and its chain of effects on price, demand and supply of the commodity, (use a schedule)
Answer.Please read the answer above and add:

SECTION B
Question.17 Define national income.
Answer. It refers to net money value of all the final goods and services produced by the normal residents of a country during a period of one year.

Question.18 Give the meaning of capital goods.
Answer. Capital goods are those final goods which help in production of other goods and services, for example, plant and machinery, equipments etc.

Question.19 What are time deposits.
Answer. Time deposits are fixed deposits and refer to those non-withdrawable (by cheques) deposits, in which an amount is deposited with the bank for a fixed period of time at a fixed^tSrebf Interest

Question.25 Explain the meaning of investment multiplier. What can be its minimum and maximum value?
Answer. 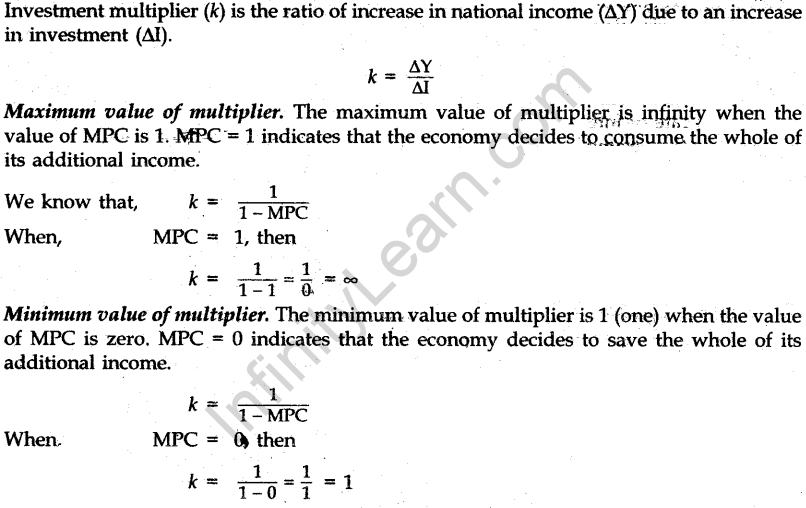 Question. 27 How do commercial banks create credit? Explain with the help of an example.
Answer. Commercial banks accept deposits from the general public known as primary deposits and keeping a percentage of these deposits in reserve (known as Legal Reserve Ratio), advance the balance of the deposits of other customers. While advancing them loans, banks deposit the amount in their accounts and again keeping a percentage of the deposits (Legal Reserve Ratio), further advance the balance amount to others. This process continues and is known as credit creation by banks. In this way banks create credit many times more than the primary deposits. The phenomenon of credit creation can be explained by taking a hypothetical example, where primary deposit is Rs 1,000 and legal reserve ratio (LRR) is 20%. Say, Mr. A deposits?1,000. Keeping Rs 200 (20%) in reserve, the balance of T640 is advanced as loan to C. This process continues and finally total deposits created are Rs 5,000, i.e., 5 times more. So money multiplier is 5. This process becomes clear, looking at the schedule given below:

Question. 29 The central bank takes steps to control rise in the price of foreign exchange. Explain the economic values it involves as far as the common man is concerned.
Answer. In a managed floating system the foreign exchange rate is determined by the market forces. However, the central bank needs to intervene in this system in order to restrict the fluctuations in the exchange rate within certain limits. A rise in the exchange rate adversely affects imports and the developmental process of the country. Inability to import might lead to inflation in the economy which would adversely affect the common man eroding his purchasing power. 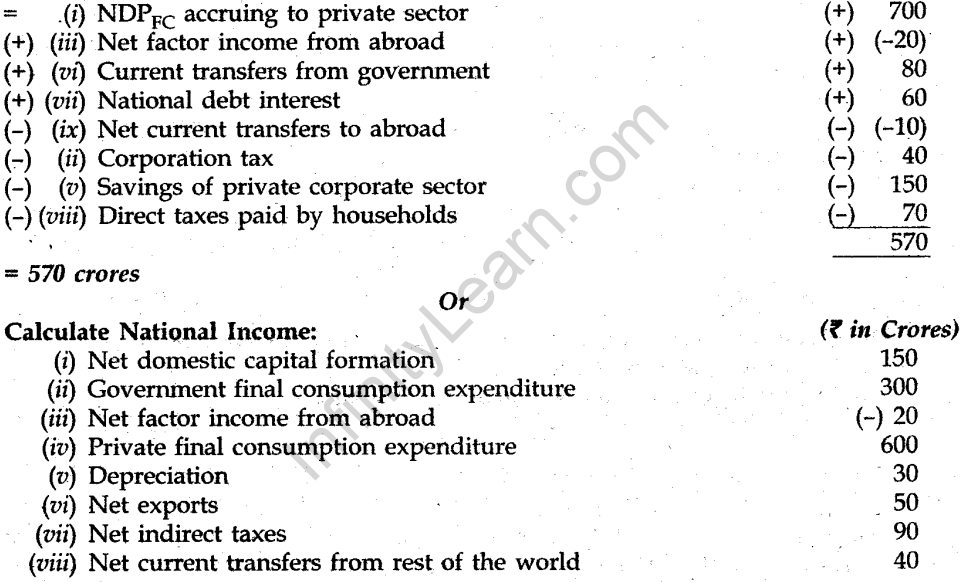 Question.31 (a) Distinguish between autonomous investment and induced investment. (b) On the basis of the following information about an economy, calculate its equilibrium level of income:
(i) Autonomous consumption 100
(ii)Marginal propensity to consume 0.75
(iii) Investment 5000
Answer. 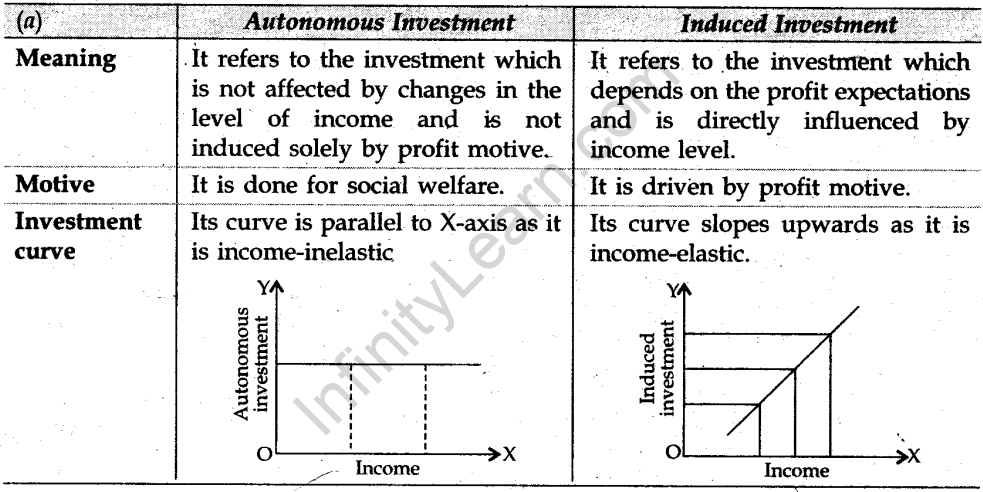 Question.32 Distinguish between the following.. Also give an example of each.
(a) Direct tax and Indirect tax
(b) Revenue expenditure and Capital expenditure
Answer.

Note: Except for the following questions, all the remaining questions have been asked in Set I.
SECTION A
Question.2 Define marginal utility.
Answer. It is the additional utility derived from the consumption of one more unit of the given commodity.

Question.8 Calculate average variable cost at each level of output:

Question.9 10 per cent increase in the price of a good raises its supply from 150 units to 180 units.
Calculate its price elasticity of supply.
Answer.

Question.15 At what level of output will the producer be in equilibrium? Give reasons for your’ answer. (Use marginal cost and marginal revenue approach)

The producer is in equilibrium at the 4th unit of output because at this level of output both the equilibrium conditions are being satisfied, i.e.,
(i) MC = MR
(ii)MC > MR after MC = MR output level.

SECTION B
Question.17 Define national product.
Answer. National product refers to the net money value of all the final goods and services produced by the normal residents of a country during a period of one year.

Question.31 (a) Distinguish between autonomous consumption and induced consumption. 6 (b) From the following data about an economy, calculate its equilibrium level of income:

Note: Except for the following questions, all the remaining questions have been asked in Set I and Set II.
SECTION A
Question.2 Define demand for a good.
Answer. Demand is the quantity of a commodity that a consumer is willing and able to buy at each possible price of that commodity during a given period of time.

Question.8 Calculate marginal cost at each level of output:

Question.9 Supply of a good rises from 200 units to 240 units as a result of 20 percent rise in its price. Calculate its price elasticity of supply.
Solution.

Question.15 Giving reasons find out the level of output at which producer will be in equilibrium. Use marginal cost and marginal revenue approach)

Question.20. What is a direct tax?
Answer. Taxes that are imposed on property and income of individuals and companies which are paid directly by them to the government are called direct taxes.

Question.31
(a) Distinguish between Aggregate Demand and Aggregate Supply.
(b) From the following data about an economy, calculate its equilibrium level of income:
(i) Marginal propensity to consume 0.8
(ii)Investment 5000
(iii) Autonomous Consumption 500
Answer.
(a) Aggregate Demand (AD) refers to the total value of final goods and services which” all the sectors of an economy are planning to buy at a given level of income during a period of one accounting year.
Even though AD has four components, we assume that AD is a function of only consumption expenditure and investment expenditure i.e., AD = C + I
AD curve has a positive slope indicating that as the income increases, aggregate expenditure also increases.
Aggregate Supply (AS) refers to money value of goods and services that all the producers are willing to supply in an economy in the given period.
Since aggregate supply is equal to national income and income is either consumed or ‘ ‘ saved, therefore,
AS = C + S
Aggregate supply curve is a 45° line drawn from the origin indicating that every point on this line is equidistant from X and Y axis.

Question.32 Explain the objectives of resource allocation and income distribution in a government budget.
Answer. Objective of resource allocation. Through the budgetary policy, government aims to reallocate resources in accordance with the economic (profit maximisation) and social (public welfare) priorities of the country. The government can influence the allocation of resources by encouraging the private sector through tax concessions, subsidies etc. to undertake certain production in public interest. If private sector does not take interest, government can directly undertake production. Objective of income distribution. Economic inequality is an inherent part of every economic system. The Government aims to reduce such inequalities through its budgetary policy by imposing taxes on the rich and spending more on the welfare/of the poor. Increased taxes will reduce the income of the rich and government spending will raise the standard of living of the poor thus reducing inequalities in the distribution of income.