Questions 1.
Which of the following statements are true/false about Political Theory?
(a) It discusses ideas that form the basis of political institutions.
(b) It explains the relationship between different religions.
(c) It explains the meanings of concepts like equality and freedom.
(d) It predicts the performance of political parties.
Answer:
(a) True
(b) False
(c) True
(d) False

Questions 2.
Politics is more than what politicians do. Do you agree with this statement? Give examples.
Answer:
The various arguments have been raised on this issue:

Hence, the following prescriptions can be found out:

As a social and natural entity: In the words of Wright and Mills:

Conclusion: Political theory can be concluded as a collection of systems and analysis of political data. It also aims to achieve a better world of politics.

Question 1.
What do you mean by politics?
Answer:
Politics has been regarded as the study of the state or power or a struggle to attain power.

Question 2.
The government as a part of politics can affect on daily life of humans both in a useful and a harmful way. How?
Answer:

Question 3.
What do we study in political theory?
Answer:
We study certain values and principles and ideals also which inspired people and guided policies like democracy, freedom, equality, etc.

Question 5.
Who argued first that equality was as crucial as freedom?
Answer:
Rousseau

Question 6.
‘Human beings are unique’. Give any two arguments.
Answer:

Question 7.
Mention the characteristics to constitute the politics.
Answer:

Question 1.
What is a class?
Answer:
A class may be defined as a larger group of people to be different from each other in the following manner:

Question 2.
Mention the characteristics of a class struggle.
Answer:

Passage 1.
Read the passage (NCERT Textbook, page 7) given below carefully and answer the questions that follow:

Though freedom is guaranteed in our Constitution, we encounter new interpretations all the time. This is a bit like playing a game; as we play chess or cricket, we learn how to interpret the rules. In the process, we discover new and broader meanings of the game itself. Similarly, the fundamental rights guaranteed by our Constitution are continually being reinterpreted in response to new circumstances. For instance, the right to life has been interpreted by the Courts to include the right to livelihood. The right to information has been granted through a new law. Societies frequently encounter new challenges which generate new interpretations. The fundamental rights guaranteed by our Constitution have been amended and expanded over time through judicial interpretations and government policies which are designed to address new problems.

Passage 2.
Read the passage (NCERT Textbook, page 6) given below carefully and answer the questions that follow:

Political theory deals with the ideas and principles that shape Constitutions, governments and social life in a systematic manner. It clarifies the meaning of concepts such as freedom, equality, justice, democracy, secularism and so on. It probes the significance of principles such as rule of law, separation of powers, judicial review, etc. This is done by examining the arguments advanced by different thinkers in defense of these concepts. Though Rousseau or Marx or Gandhi did not become politicians, their ideas influenced generations of politicians everywhere. There are also contemporary thinkers who draw upon them to defend freedom or democracy in our own time. Besides examining arguments, political theorists also reflect upon our current political experiences and point out trends and possibilities for the future.

3. Political theory examines the arguments advanced by different thinkers in defence of these concepts.

Question 1.
‘Politics works as a pursuit of common good of people’. Justify the statement.
Answer:
Politics implies to power to make laws and to enforce them for common good:

Politics as a pursuit of common good:

Question 2.
What are the differences between politics and political science?
Answer:
Politics:

1. Read the cartoon (NCERT Textbook, page 3) given below and answer the questions that follow: 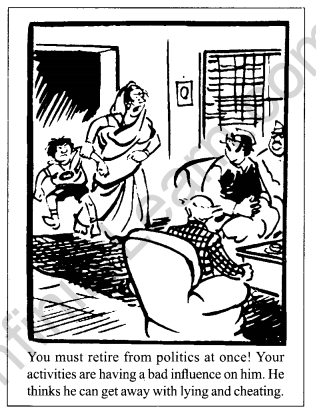 2. Mostly leaders tell a lie frequently even in family to influence their young ones adversely.
Politics, is considered a ‘dirty game’ on the principle of ‘everything is fair to win the power’.