Motion is the change with time of the position or orientation of an object. The movement or motion along a line or a curve is called translation. Motion that changes the orientation of an object is called rotation. In both cases, every point in the object has the same velocity (directed speed) and the same acceleration (time rate of change of velocity). The most kind of motion combines both translation and rotation.

Each and every movement is relative to some frame of reference. If a body is at rest, it means that it is not in motion but means that it is being described with respect to a frame of reference that is moving together with the body. For example, an object on the surface of the earth may appear to be at rest, but that is only because the observer is also on the surface of the earth. As we know, the motions of objects obey Newton’s laws of motion. The motion at speeds close to the speed of light must be treated by using the theory of relativity, and the motion of very small bodies (such as electrons) must be treated by using quantum mechanics. 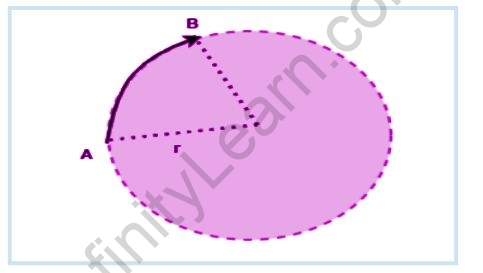 Here, the length of the arc from point A to point B is denoted by “s”. Now, the angle covered by the object is given by,

The angular velocity of the object can be defined as the rate of change of angle. It is the same as the velocity in the case of straight-line motion, and it is denoted by the Greek symbol ω.

Here, S is the length of an arc, which is the distance covered by the object,

V=ds/dt, where ” V” is considered as the speed of the body.

When substituting the value in the equation,

We know that objects have a tendency to move in a straight line. There must be some force that keeps them on a circular path for the objects making a circular motion at a constant speed. This force is known as the centripetal force, and the reaction of such a force is called centrifugal force. Thus, we can say that both these forces are equal and opposite in direction.

Now, centrifugal force is given by,

It is known that

When substituting this relation into the equation,

We have already examined Newton’s Laws as they apply to linear motion. That is, we have examined how forces change the magnitude of the velocity of an object but not how forces affect an object’s direction. It is known that velocity is a vector quantity, with both speed and direction; when an object moves with uniform speed in a circular path, its velocity, therefore, undergoes constant change, meaning it experiences acceleration. So, we can consequently analyze uniform circular motion using Newton’s Laws.

The movement or motion of electrons about the nucleus.

The movement of blades of the windmills.

The tip of the second hand of a watch with a circular dial represents uniform circular motion.

The small stone is tied to a rope and is being swung in circles.

What is an example of uniform circular motion?

What is an example of non-uniform circular motion?

The oscillation of a pendulum represents the non-uniform circular motion.

What changes in the uniform circular motion?

The acceleration stays the same in a uniform circular motion. So, the thing that changes is the Velocity. This happens because the object's direction is always changing. In simple words, velocity is said to be a vector quantity, and it depends upon the direction.