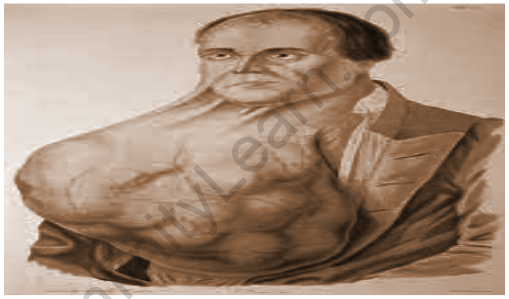 Graves’ disease has many signs and symptoms because thyroid hormones affect many-body systems. Although anyone can get Graves ’disease, it is most common in women under the age of 40.

The symptoms are as follows:

(a) Goitre (Swelling of the neck).

(b) Protrusion of eyeballs.

(c) The patient is tired, trembling, and agitated.

Graves’ disease occurs when the body’s immune system produces antibodies against a single unit of thyroid cells that produce hormones in the neck for unknown reasons (thyroid gland). Thyroid function is usually regulated by a hormone produced by the pituitary gland. Here we have combined the basic concepts of definition and definition of exophthalmic goiter with examples of exophthalmic goiter.

Our immune system fails in Graves’ illness. It is not clear why this happened. Graves’ disease occurs when the body’s immune system produces antibodies against a single unit of thyroid cells that produce hormones in the neck for unknown reasons (thyroid gland). Thyroid function is usually regulated by a hormone produced by the pituitary gland.

It suggests that TRAb interferes with the natural regulation of the thyroid, leading to overproduction of thyroid hormone (hyperthyroidism).

Graves’ disease manifests itself in the following ways:

Although anyone can get Graves’ disease, a number of variables can make it worse, including:

Graves’ disease can include:

Graves ’disease is often accompanied by an increase in heart rate, which leads to more heart problems, such as loss of normal heart rhythm (atrial fibrillation), leading to stroke.

Dryness will occur if the eyes of proptosis (erupting) are so severe that the valves do not close completely at night, which puts the risk of infection of the second cornea, which can lead to blindness. In addition, pressure on the optic nerve behind the globe can cause visual impairment and loss of vision.

Chronic hyperthyroidism can lead to bone loss, which can resolve with treatment.

Graves ’disease is treated with antithyroid drugs that reduce the production of thyroid hormone, radioiodine (radioactive iodine I-131), and thyroidectomy (surgical removal of the prostate). Because surgery on a patient with hyperthyroid is dangerous, the patient is given antithyroid drugs prior to thyroid removal for euthyroid. Each of these treatments has its advantages and disadvantages and there is no single treatment that is thought to be suitable for everyone.

Antithyroid drugs should be taken for six months to two years for them to work. However, once the drug is stopped, a hyperthyroid condition may develop. The risk of recurrence is about 40% -50% and lifelong antithyroid drug treatment have side effects such as agranulocytosis and liver disease.

One of the possible side effects of antithyroid drugs is a decrease in white blood cells. As a result, radioiodine therapy is the most commonly used treatment in the United States. In contrast, antithyroid drugs and thyroidectomy are widely used in Europe, Japan, and around the world. Clean blockers do not affect the retina of the eyelid, they are connected to alpha-adrenergic receptors.

What is an exophthalmic goiter and how does it grow?

Thyroid enlargement appears as a lump in the front of the neck and is often associated with iodine deficiency, also known as struma.

What are the main causes of exophthalmic goiter?

Exophthalmic goiter is caused by a failure of the immune system to fight infections, leading to an overactive thyroid gland.

Q. Write down three symptoms of the grave disease.

Ans: Any three symptoms of Graves’ disease are: