The aromatic hydrocarbons that lack a benzene ring are referred to as heteroarenes. Huckel’s rule (total number of pi electrons in a monocyclic ring = 4n + 2, where n is any positive integer or zero) is followed by all of these heteroarenes.

A minimum of one carbon is replaced by nitrogen, oxygen, or sulfur in these molecules. Furan (which includes oxygen) and pyridine are two common examples of heteroarenes (contains nitrogen).

“Benzene was the first chemical classified as an aromatic hydrocarbon.” It is also the most difficult aryl hydrocarbon to synthesize. Each benzene ring carbon atom possesses two carbon-carbon sigma bonds, one carbon-hydrogen sigma bond, and one double bond with a neighboring carbon in which the pi-electron is delocalized.

A circle inside the hexagon represents the delocalization of pi electrons in the benzene molecule. The bond order of all carbon-carbon bonds in this molecule is 1.5, and this equivalence may be explained using benzene resonance structures.

The following are some general characteristics of aromatic hydrocarbons:

Aromatic hydrocarbons are used as the main reactant in many organic chemical processes.

These reactions involve the substitution of a different substituent group for one of the substituents on the ring of an aromatic hydrocarbon, most typically a hydrogen atom.

The following are examples of frequent aromatic substitution reactions:

The coupling of two radical fragments is accomplished with the aid of a metal catalyst in these sorts of reactions. The following types of bonds can form when aromatic hydrocarbons undergo coupling processes.

Arene hydrogenation processes often result in the creation of saturated rings. The reduction of 1-naphthol into a mixture including distinct isomers of decalin-ol is an example of such a reaction. Another example of such a reaction is the hydrogenation of resorcinol using spongy nickel (also known as Raney nickel) and aqueous NaOH. This reaction begins with the production of an enolate, which is then alkylated (with methyl iodide) to generate 2-methyl-1,3-cyclohexanedione.

A polynuclear aromatic hydrocarbon is one composed of fused aromatic ring molecules. These rings have delocalized electrons on one or more sides. PAHs can also be thought of as molecules formed by the fusion of two or more benzene rings. Only carbon and hydrogen atoms are found in polynuclear aromatic hydrocarbon molecules. These can be present in coal, tar, oil, and some prepared meals like smoked fish and burnt toast.

Naphthalene is a frequent example of these polycyclic hydrocarbons. Pollutants are defined as these chemicals. 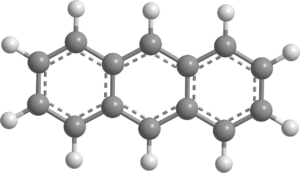 What happens when aromatic compounds react?

Aromatic compounds, commonly known as arenes, undergo substitution reactions in which an electrophile replaces the aromatic hydrogen, resulting in electrophilic substitution. Metal cross-coupling, such as the Suzuki reaction, enables the formation of carbon-carbon bonds between two or more aromatic molecules.

What is Sandmeyer's reaction, give an example?

The Sandmeyer reaction is a chemical process that produces aryl halides from aryl diazonium salts by using copper salts as reagents or catalysts. An example is a radical-nucleophilic aromatic substitution.

What are aromatic hydrocarbons made of?